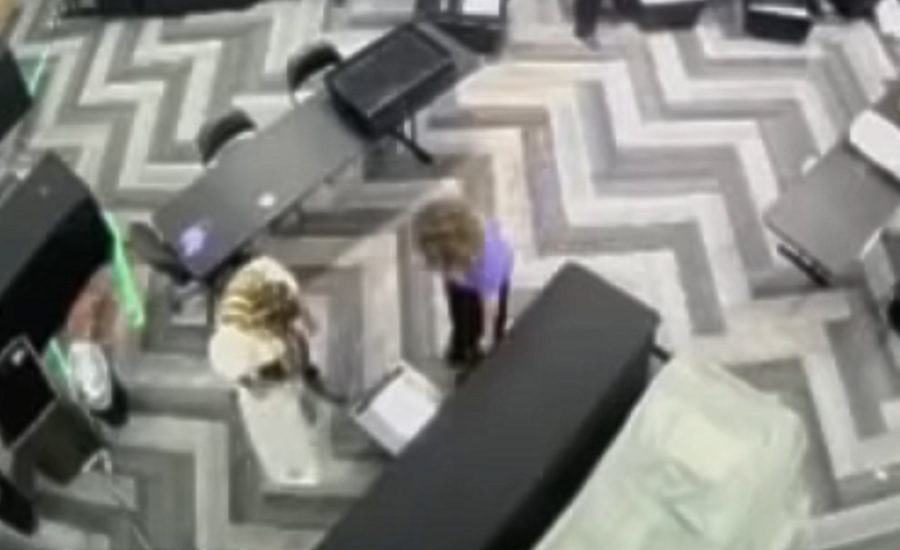 Yesterday, we brought you a commentary concerning the video of what appears to be unsupervised ballot-counting by a skeleton crew at State Farm Arena in Fulton County, Georgia. Reluctantly, out of the goodness of our hearts, we linked to a “fact”-check from Leadstories.com that claimed the State Farm Arena story had been “debunked.” We even inserted a paragraph paraphrasing a statement from the Georgia secretary of state’s chief investigator, Frances Watson (as if that in itself “debunked” anything) saying the video shows nothing unusual; that the workers were just envelope-cutters, not vote-counters; that those containers with ballots in them weren’t “suitcases” (we had called them “containers”); and that no one was actually told to leave the floor that night. “Duly noted,” we said.

The Washington Post, Newsweek and other outlets took Lead Stories’ “debunking” as gospel. We would’ve risked being labeled misinformation by social media had we not included their “facts” in our opinion piece.

But we have had just about enough of Big Brother — Big Tech, I mean — trying to stop the spread of unsanctioned information. That they would flag unsanctioned opinion unless we rewrote it to please their sensibilities is a bridge too far.

Mollie Hemingway at The Federalist has written an outstanding piece that fact-checks the fact-checkers on this story. We were going to put one together ourselves, but she has saved us a lot of work and done a spectacular job. Hers is a must-read.

First of all, we’d like to put up front what Mollie saves for the end of her piece: Lead Stories says it is funded by Facebook, Google and Bytedance — which, according to Mollie, is “the Beijing-based and China Communist Party-linked company known for TikTok,” which Trump has called a national security threat. We’ve already discussed the role Facebook and Google have played to suppress information that might be deemed harmful to Biden’s candidacy. Even the Center for Tech and Civic Life — which is now under scrutiny (not enough, though) for funding those unmanned, non-secure drop boxes in certain “blue” areas for the 2016 election — is funded by Facebook and Google, to the tune of hundreds of millions of dollars. Fact-check that.

Ironically, as Mollie points out, Facebook is now using Lead Stories to censor stories critical of Lead Stories. I guess we know what they’ll think of this one.

The great Ms. Hemingway dismantles Lead Stories’ so-called fact-check. Security video from the arena, received under subpoena by Rudy Giuliani’s team, clearly shows the room abruptly clearing out and a small team pulling containers full of ballots from underneath a long, skirted table, where they had sat hidden since morning. The workers appear to be running ballots through machines with no one looking on.

On Friday, Lead Stories published a “hoax alert,” claiming to have debunked the video when they had done no such thing. It seems that all they had done was to accept election officials’ claims, hook, line and sinker. But sworn affidavits from Republican observers contradict what the officials said. According to them, a woman with blonde braids (presumably the same braided woman who was there with the skeleton crew) yelled out to them to stop work, go home and come back in the morning.

Lead Stories said there was no such announcement made to workers, and none made to the media, either — though ABC News, as we reported, said on election night that the count had been shut down. Their source reportedly was Regina Waller, Fulton County public affairs manager for elections.

As Hemingway notes, the Republican observers’ story matches ABC News’ election night reporting perfectly. Local NBC journalists echoed this report, and so did the Atlanta Journal-Constitution and other outlets.

Then there’s that story about the busted water main. There apparently wasn’t one, or any broken pipe at all. The only water-related problem that has come to light is a urinal that overflowed the morning of Election Day and was an issue for a couple of hours. This was not a big deal. It even appears to have happened on the floor above, and they reportedly never even put in a service call. In fact, Ms. Watson swore in a new affidavit that the original report of a water leak late on Nov. 3 was actually just that overflowing urinal.

But she still maintained that workers and observers “simply left on their own.” (If you were in the middle of doing an official vote count, or watching one, and some people started walking out, would you just leave on your own unless you knew for sure you were no longer needed?) Also, she said the ballots were put under the table because workers thought they were stopping for the evening. The video clearly shows them being placed under the table early in the day and being brought OUT after people left.

Secretary of State Brad Raffensperger’s office also claimed that a designated election observer was where he was supposed to be all night, the entire time. Questions remain about this as well. First of all, this was one state election board monitor, who would be no substitute for partisan monitors and press. Also, we know he was actually there for less than an hour of the time in question, by his own admission.

Hemingway notes that Fulton County was one of 44 districts in 18 states where the Justice Department sent election monitors. Apparently, it was one of those places where non-compliance was a concern. (Interestingly, that list includes Maricopa County, Arizona; Gwinnett County, Georgia; Detroit, Michigan; Philadelphia County, Pennsylvania; and Milwaukee, Wisconsin.) It looks as though these officials were focused on monitoring suppression of voting rights at polling places, not so much what would be happening later during the vote count. But that’s where a whole different kind of voter suppression can happen.

According to Hemingway, an investigator is shown on the video arriving at 12:15 a.m. on November 4, looking around and talking on his phone. As far as we know, no reporters or “fact”-checkers have asked what he was doing there at that particular time.

Republican watchers swore that even during the time they were in the room, they were kept so far away that they couldn’t observe. The video from the facility supports this claim as well.

Hemingway also includes a list of problems cited by President Trump and Georgia Republican Chairman David Shafer calling into question tens of thousands of likely fraudulent votes from felons, underage voters, unregistered voters, double voters, out-of-state voters, deceased voters, etc. Their lawsuit also alleges that because it was made “unreasonably difficult” to contest questionable ballots, the mail-in “vote” received essentially no scrutiny. In Georgia, Biden is currently ahead by a mere 11,770 votes.

We were on firm ground with what we said about the counting in Georgia. We’ve not accused anyone of outright fraud but know what it looks like and will not be gaslighted. The evidence that this count is wrong must be objectively examined, not swept under the rug (or hidden under a table?) as the media giants would prefer.

James Robison on the Election: Pray for Truth to Prevail