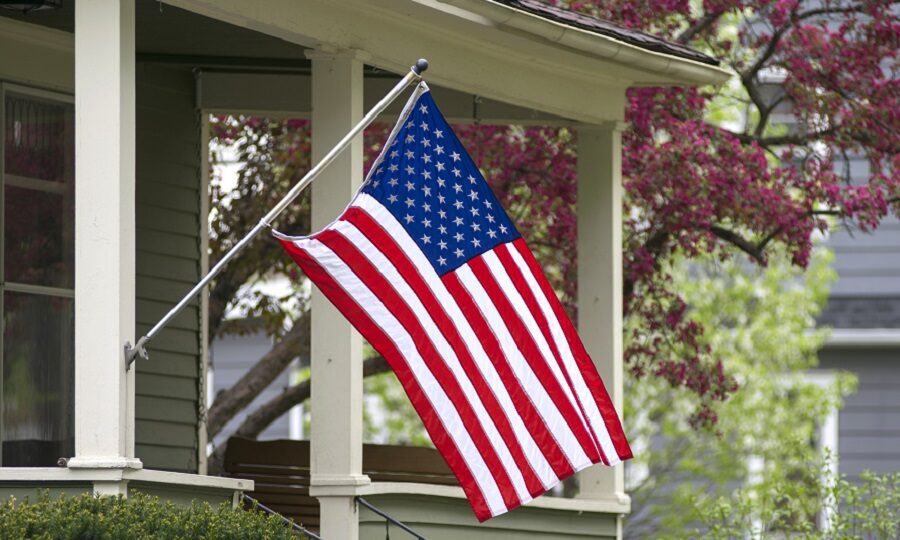 As America approaches another birthday on the 4th of July, we find that there are many in our society that want to tear the flag down.

This is obviously a small, vocal minority. But they certainly speak for many Americans today who hate our country.

Here are a few examples of the flag under attack:

The Promise of America

The flag may be under attack, but really the nation is under attack. There are many Americans who hate America.

The flag of the United States symbolizes the country. And what is the essence of America? God-given rights and the consent of the governed.

Dr. Peter Lillback, founder and president emeritus of the Providence Forum (for which I have the privilege to now serve as executive director) notes that the red stripes in the flag stand for “hardiness and valor.” The white ones for “purity and innocence.” And the blue stands for “perseverance, vigilance, and justice.”

Some people say the American flag is outdated because America represents racism. It’s true that many in the American experience did not initially experience the promise of America — that all men are created equal. But the key is — as Dr. Martin Luther King, Jr. pointed out — the founders of America made a promissory note in the Declaration of Independence that one day this would apply to all. As King pointed out, America’s problem wasn’t its creed — that all men are created equal — but that America was not living up to its creed.

What do we celebrate on the 4th of July? We celebrate the fact that on that day in 1776, 56 men in Philadelphia who represented three million people in their home states voted to ratify the final wording of the Declaration of Independence.

The heart of this document is that we have rights given to us by the Creator, and the king has violated those rights in specific example after example. Therefore, trusting in God, we the people declare independence from Great Britain. The founders declared independence from England, while declaring dependence on Almighty God.

The strict secularists who are trying to remove any vestige of God from the public arena need to realize that in doing so, they are ultimately undermining everyone’s freedom, including their own. Wherever atheistic systems such as Communism or Socialism have taken over, people lose their rights; and the killing begins.

In a secular state, to whom can the dissident appeal? There is only the state. In contrast, in one nation under God — which the founders created — we can ultimately appeal to God. One of the flags at the time of independence even declares, “An Appeal to Heaven.”

Since our rights come from God, it’s not up to the state to determine if we even have rights. What the state giveth, the state can taketh away. That is not true with God-given rights.

The founders declared in the Declaration, that they were “appealing to the Supreme Judge of the world for the rectitude of our intentions.” Lillback once pointed out to me that this is a reference to Jesus in the Declaration. Jesus is the Judge, and the founders knew that.

Does the Flag Still Stand for Freedom?

Does the flag still stand for freedom? One of the most poignant scenes in any movie I’ve ever seen was the climax of a film they wouldn’t make today. It was Not Without My Daughter (1991), based on a true story, starring Sally Field. She and her daughter manage to escape from sharia law and her abusive husband in Iran.

The film climaxed when they finally escaped (after many terrible incidents) to nearby Turkey, and they saw the majestic American flag outside the American embassy. Seeing that flag and the freedom it represents virtually makes you cry — with joy.

The flag, whole or tattered, declares: God-given rights, self-government under God, and therefore, freedom. Think of the incredible sacrifice of all those who paid “the last full measure of devotion” to our country, defending that flag. Ironically, the flag even symbolizes the freedom that its opponents have to voice their opposition to it.

Jerry Newcombe, D.Min., is the senior producer and an on-air host for D. James Kennedy Ministries. He has written/co-written 33 books, e.g., The Unstoppable Jesus Christ, American Amnesia: Is America Paying the Price for Forgetting God?, What If Jesus Had Never Been Born? (w/ D. James Kennedy), and the bestseller, George Washington’s Sacred Fire (w/ Dr. Peter Lillback). Learn more at www.jerrynewcombe.com and follow him on Twitter @newcombejerry.