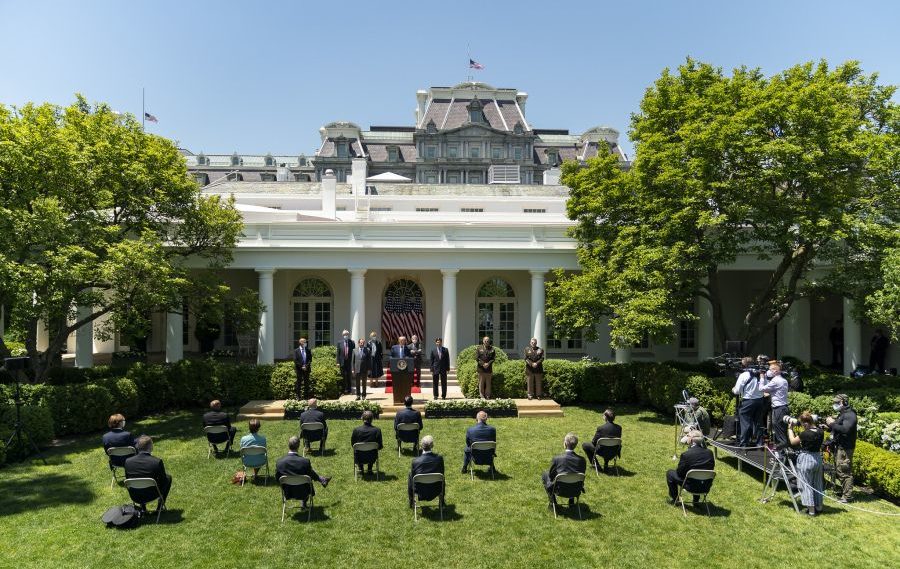 President Donald J. Trump delivers an update on vaccine development and answers questions from members of the press Thursday, May 15, 2020, in the Rose Garden of the White House.

Department of Veterans Affairs Secretary Robert Wilkie spoke out Thursday in an attempt to extinguish the hair-on-fire reactions of the media to news that President Trump is taking hydroxychloroquine to ward off the coronavirus. Many of the reporters cited a recent, highly-publicized study linking the drug to higher rates of virus deaths in VA hospitals.

Wilkie said this is a safe drug that’s been around for 65 years, we know its side effects, and he and everyone who’s been in the military since the Eisenhower era have taken it. VA hospitals give out 42,000 doses a day. He also noted that contrary to news reports, that was not a VA study, it just used VA data. It wasn’t peer-reviewed; it was just gone over by three ophthalmologists. And it didn’t take into account co-morbidities (other life-threatening conditions the patients could have died of.)

That last part is especially interesting, since we covered that study the morning after it was released. While major news outlets were trumpeting the false headline that’s since become “common knowledge” — “hydroxychloroquine not effective and linked to higher death rates” — this newsletter debunked that on day one. All it took was something that I guess was beyond the capabilities of current “professional journalists”: reading the actual study.

The authors admitted that the drug was mostly given to patients who were already severely ill (proponents only claim it’s effective as part of a cocktail of drugs given during early stages of the disease), so they expected usage to correlate to higher mortality numbers. Claiming this study proves hydroxychloroquine increases the death rate would be like serving lemon Jello to everyone in a terminal cancer ward, then claiming that lemon Jello causes cancer deaths. I know the Democrats fancy themselves the “party of science,” so I’m surprised they’ve never heard the phrase, “Correlation does not equal causation.” Or the Internet term, “Read the (BLEEP!) manual!”

I’m not a doctor, so I don’t make any claims for the effectiveness of this drug — although I do defend everyone’s right to take any legal drug that patients and their doctors agree might help, without politicians and partisan media getting involved. As one pundit noted, liberals think abortion is just between a woman and her doctor, but to take Hydroxychloroquine, you need the approval of Congressional Democrats and the air staff of CNN.

By the way, speaking of the air staff of CNN, kudos to White House Press Secretary Kayleigh McEnany. She pointed out that while CNN’s Chris Cuomo is blasting President Trump for taking hydroxychloroquine, when Cuomo had the coronavirus, one of the drugs he took was quinine. That’s an earlier, less-safe version of the same drug that was removed from the market by the FDA in 2006 because it did have serious side effects, including death.

And I don’t mean to drag people’s families into this, but I’d really suggest talking to your doctor before following Chris Cuomo’s wife’s coronavirus cure, which included bathing in Clorox. I can only imagine what her husband would say about Trump if he suggested trying that!