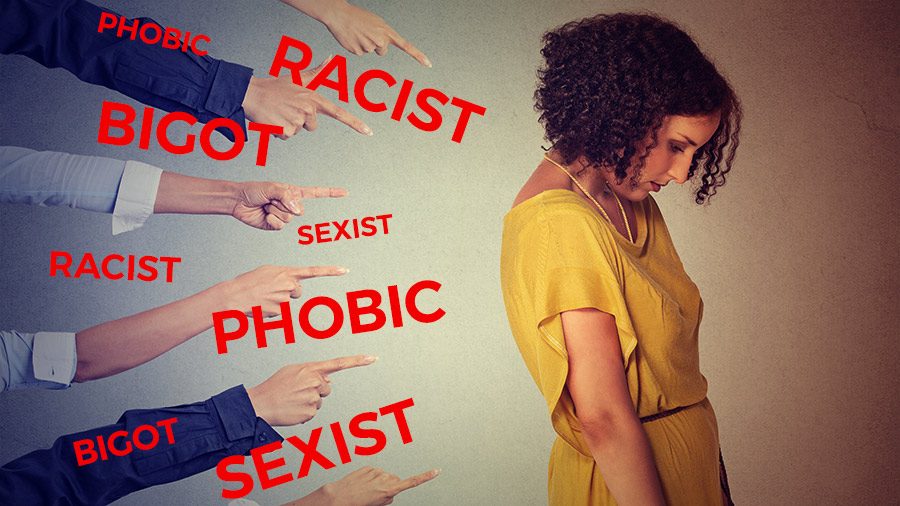 Beloved Harry Potter author J.K. Rowling is no longer loved. In recent tweets, she expressed her view that men who identify as women are, in fact, men. Though this view is consistent with what virtually every person throughout all of human history has believed, she was branded transphobic. Checkmate, Rowling! In case you didn’t know, calling someone transphobic is supposed to be bad.

There are a lot of terms that end with “phobic”: homophobic, Islamophobic, xenophobic, and transphobic. If someone expresses disagreement with the mainstream narrative on homosexuality, Islam, foreigners, or transgender people, they’ll be slapped with a “phobic” label.

Although a phobia has been historically understood to be a fear of something (e.g., arachnophobia is a fear of spiders), adding the suffix today is intended to signal that you hold a bigoted view on that subject … and that’s bad. You’re supposed to be so afraid of being labeled phobic that you’ll change your position or, at least, never express it again in public. If you do, prepare to be canceled.

I’ll admit there are times when using a “phobic” term, like Islamophobic, might be legitimate. I’ve met people who are genuinely fearful and angry with Muslims. It’s rare, though. That’s why I don’t believe you need to have a fear of being called “phobic” (would that be phobiphobic?). Here are three reasons why you shouldn’t let the label bother you.

First, calling you “phobic” is intended to dismiss you or your view.

Instead of providing a substantive response to your position, sometimes people will try to dismiss it. Once you’ve been labeled “homophobic,” there’s nothing left for you to do but (allegedly) cower and walk away. After all, you’ve been identified as the bigot that you are and now need to bow out from further discourse. Dismissing your position is similar to the next mistake.

Second, calling you “phobic” is often merely a form of name-calling.

In logic, this is called an ad hominem and is recognized as an illicit approach to engaging someone you disagree with. It occurs when someone attacks you or your character instead addressing your argument with a reasoned response. Elementary school children deal out ad hominem attacks to each other at recess. They don’t have a civil means to express their anger, so they resort to name-calling. “Dork,” “dweeb,” or “loser” were the go-to jabs when I was a kid. Sadly, some of the same students grew up and now use the same means of engagement. Only today, their disparaging terms sound more sophisticated (e.g., “xenophobic”). But at its core, this is simply name-calling.

Third, it’s often an irrelevant distraction from the topic at hand.

In logic, this is called a red herring. It’s a faulty way to dialogue because it diverts the conversation away from the main topic and inhibits productive discourse.

One time, I was answering questions about abortion at a secular university event. After multiple failed attempts to undermine my scientific defense that the unborn is a human being, someone got up to the microphone and said, “You’re just anti-woman.” It’s worth noting the event topic was about whether the unborn is a human being. Whether I’m anti-woman (or pro-woman) has no bearing on whether the evidence I provided was true. Even if I were anti-woman, how would that affect the scientific evidence I presented? I could be anti-woman, homophobic, racist — I could be Hitler — and it would have absolutely no impact on the arguments I presented that day. Whether or not the unborn is a human being is solely based on the merits of my evidence, not on my identity or character.

In the same way, whether or not J.K. Rowling is transphobic has no bearing on whether or not a man who identifies as a woman is a woman. Rowling’s character — good or bad — is irrelevant. Calling her transphobic shifts the attention away from the question at hand and focuses it on her.

I don’t know what’s led our society to sidestep rational discourse and resort to calling people names, but it’s unfair, irrelevant, and immature. That’s why there’s no need to be afraid to get slapped with a “phobic” label. In most cases, it’s an illegitimate attack.