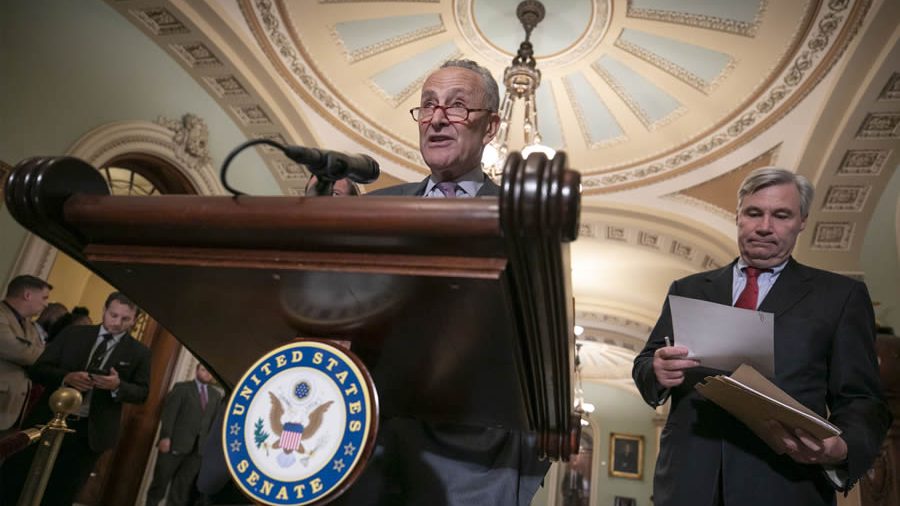 Senate Minority Leader Chuck Schumer, D-N.Y., joined at right by Sen. Sheldon Whitehouse, D-R.I., says Senate Democrats will initiate a federal lawsuit if their requests for documents from Brett Kavanaugh's days as a White House aide are denied, during a news conference on Capitol Hill in Washington, Thursday, Aug. 16, 2018.

Democrats figure that if they can’t yet get enough impeachment traction from the Michael Cohen and Paul Manafort cases, they’ll at least be able to delay Judge Brett Kavanaugh’s confirmation to the Supreme Court.

Apart from whether the cases of his personal lawyer and his campaign chairman expose President Trump to legal jeopardy, which I strongly doubt, Democrats have dialed up their propaganda machine to 12 — the default 11 setting not quite satisfying their impeachment bloodlust.

They have cried wolf so many times that when they swerve into something they pray has some teeth, they can barely contain their glee, which they attempt to disguise as grave concern for the republic.

Having no legitimate reason to object to Kavanaugh’s appointment, Democrats seek the next best thing — to obstruct by deception, delaying his confirmation hearings until after the midterm elections, in which they hope to gain the majority in the House so that they can commence their already planned impeachment proceedings.

Hand-wringing Democratic senators are hemorrhaging phony concerns about proceeding with Kavanaugh’s confirmation hearings. Sen. Mazie Hirono said she would cancel a planned meeting with Kavanaugh because Trump, whom she called an unindicted co-conspirator, “does not deserve the courtesy of a meeting with his nominee” in the wake of Cohen’s claims about Trump in federal court Tuesday.

The composition of the Supreme Court is not a matter of what a president “deserves.” Nominating someone to the high court is not some kind of naked political reward governed solely by the president’s whims. And yes, it’s the president’s constitutional power to appoint justices, but the Senate’s confirmation decision should turn on the nominee’s qualifications and fitness, not the president’s approval ratings.

Sen. Ed Markey said he wouldn’t meet with Kavanaugh, either, ludicrously claiming, “His nomination is tainted and should be considered illegitimate.”

“The Senate must reject any SCOTUS nominee from a president who is an alleged criminal co-conspirator,” said Sen. Cory Booker, “especially when that nominee may rule to protect Trump from any accountability.” Sen. Richard Blumenthal said, “Under no circumstances should we be considering his nomination of Judge Kavanaugh to the Supreme Court in just one week.”

Senate Minority Leader Chuck Schumer, upon hearing the news of Cohen’s guilty pleas, breathlessly exclaimed, “It’s a game changer. … In my view, the Senate Judiciary Committee should immediately pause the consideration of the Kavanaugh nomination.”

For all the Democrats’ carping about Trump’s tweets, does anyone ever call them on their outrageous statements? Why on earth would Kavanaugh’s nomination be tainted and illegitimate? What do Cohen’s guilty pleas have to do with the Senate’s constitutional power to pass on judicial nominees?

Well, Kavanaugh, say Democrats, has a broad view on executive authority and would seek to shield Trump from special counsel Robert Mueller’s investigation.

“At the very least,” said Schumer, “it is unseemly for the president of the United States to be picking a Supreme Court justice who could soon be effectively a juror in a case involving the president himself.”

If Schumer’s talking about an impeachment trial, he’s all wet. The Senate acts as the court in such cases. But what if he’s talking about Trump’s fighting a potential subpoena from Mueller or about the fact that Kavanaugh might sit on the court that could decide whether a sitting president can be indicted?

It’s preposterous to suggest that Trump appointed Kavanaugh to insulate himself from a subpoena. It’s equally absurd for Democrats to delay Kavanaugh’s confirmation hearings based on how he might rule in a case that could come before the court. The question is not which way he would rule but whether he would honor the Constitution and rule of law, irrespective of the politics and personalities involved.

Democrats can’t hide their cynical view that the Supreme Court is simply a super-legislature that functions to advance or impede policy, personal and political agendas, which is why it’s rich to hear them decrying Trump as a clear and present danger to the Constitution. Appellate court nominees should not be confirmed or rejected based on their ideology. What’s relevant is whether they would render justice impartially and according to the law.

Kavanaugh’s extensive and readily accessible judicial record ensures that he would honor the Constitution and rule of law, which is why Democrats so adamantly oppose him. They count on activist liberal appellate judges to pervert the Constitution to diminish the protection of life for the unborn, the Second Amendment, religious liberty, America’s sovereignty, economic liberty and countless other things. They preserve the fiction of a “living Constitution” to advance their policy agenda, knowing that the more constitutionalists are on the court the less likely it will be to create, rather than interpret, laws and thereby thwart the people’s will.

For all their cacophony, the Democrats’ obstructionist ploy against Kavanaugh won’t work. As an unnamed GOP strategist correctly observed, “this isn’t going anywhere. It’s just the latest in a series of spaghetti-on-the-wall tactics that fall flat and make them look silly. … This actually makes things even more difficult for red-state Democrats and further energizes the Republican base.”

That’s exactly right. Trump voters know that Democrats were never going to give Kavanaugh a fair hearing and that they will continue trying to delegitimize Trump’s presidency and his lawful exercise of presidential powers. I’m betting the voters recognize this as just another chapter in the Democrats’ ongoing effort to overturn the election by any means and disenfranchise them.

David Limbaugh is a writer, author and attorney. His latest book is The True Jesus: Uncovering the Divinity of Christ in the Gospels. Follow him on Twitter @davidlimbaugh and his website at www.davidlimbaugh.com.