If Democrats don't want to be perceived as being anti-Christian in their attitudes and policies, they'd better regroup, because plenty of people have taken notice. 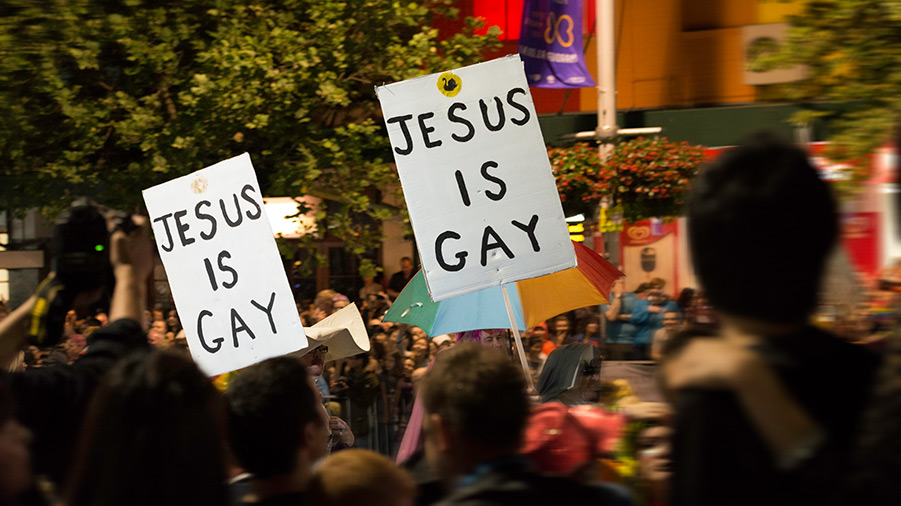 People on the left are outraged when you question their patriotism, their dedication to the nation as founded and their respect for the Constitution as originally written, but they continually vindicate our concerns.

The most recent example is the left’s unhinged mania at Judge Amy Coney Barrett’s inclusion on President Trump’s list of potential Supreme Court appointees. In times of perceived crisis — and this is certainly one of those times for leftists — they show their colors, and you can color them militantly opposed to Barrett, in large part because of her Catholicism. And guess what else. Rumor is that she frequents a Bible study, as well.

Forget Barrett’s distinguished career and formidable legal credentials. The leftist media went bonkers, unapologetically displaying their bigotry when it comes to Christians. One commentator pointed out that Barrett “went to Notre Dame. She is very Catholic.” Get that? She’s not only an evil Catholic; she’s very much a Catholic.

Another pundit said, “It’s kind of a dubious position, but I’m sure that if (Trump) does pick a woman, she’ll be known as the Aunt Lydia of the Supreme Court” — a derogatory reference to the villainous character in the popular show The Handmaid’s Tale. This is reminiscent of Dianne Feinstein’s astounding alarm, expressed during Barrett’s appellate court confirmation hearing in the Senate, that Barrett’s Catholic “dogma lives loudly within” her.

When leftists aren’t denying their prejudice, they often selectively cite Scripture to “prove” that Jesus Christ was a social justice warrior or that the Bible mandates open borders. Oh, yes, and Jesus didn’t judge people as we dastardly conservatives do. In a 2010 piece, liberal professor Michael Shermer quoted the oft-misinterpreted passage in which Jesus begins, “Judge not, that ye be not judged.” Then Shermer declared: “Would any red-blooded, gun-(toting), Hummer-driving, hard-drinking, Bible-(toting) conservative today (say) anything like this? (Matthew 5:43-44): ‘You have heard that it was said, “You shall love your neighbor and hate your enemy.” But I say to you, Love your enemies and pray for those who persecute you.'” (It is astounding that leftists see themselves as tolerant and nonjudgmental, but I’ll let their record speak for itself on this.)

But when they’re not cherry-picking Scripture to shame immigration hawks or to pander to Christian voters during political campaigns, they show us another side.

I’m not saying that no leftists are Christians, but I am saying that far too many of them show a hostility toward Christianity and Bible-believing Christians. It’s more than just a disdain for political conservatives who are also churchgoing Christians.

My 2003 book, Persecution: How Liberals Are Waging War Against Christianity, documents the left’s pattern of discrimination against Christian influences in culture, Christian values and Christian religious liberty. When I appeared on Hannity & Colmes for an interview on the book, I had great difficulty getting an airing with liberal co-host Alan Colmes because he couldn’t get over the subtitle. I was friendly with Alan, and he was respectful, but he insisted on my defending his inferred premise that I was saying that liberals can’t be Christian.

As I explained to Alan, I would never suggest that liberals can’t be Christian, and indeed, I know many who are. I happen to believe that in many cases, their political worldview is at odds with a biblical worldview, but I don’t presume to challenge the authenticity of their faith.

No — my point is that irrespective of their deep-felt faith or lack thereof, they too often are at odds with biblical Christianity and Bible-believing Christians in the media, at universities and other schools, in our culture, and in the political sphere. And is it any coincidence that the overwhelming number of mocking atheists on Twitter, in my admittedly anecdotal experience, are flaming leftists? I don’t think so.

Barack Obama infamously disparaged Bible- and gun-toting Americans who live in small Midwestern towns. “It’s not surprising,” said Obama, that “they get bitter (and) cling to guns or religion or antipathy to people who aren’t like them or anti-immigrant or anti-trade sentiment as a way to explain their frustrations.”

That statement set off alarm bells for me for many reasons, not the least of which was that Christians are supposed to cling to Jesus Christ. Their faith in him is central to the religion. There is not only no shame in trusting and depending on Christ; it is essential as the road to their salvation and their Christian living. What’s more telling than Obama’s appalling statement is that he was wholly unaware what he was revealing about himself with it.

It’s not just Obama but the Democratic Party at large. Is its frequent disrespect for the God of the Bible, Christian home-schoolers and the constitutionally protected religious liberty of Christians indicative of something or just a matter of my imagination? How about Democrats’ hostility to voluntary prayer in public schools, their selective excising of Christian history from public school textbooks, their allergy to Christian-themed hymns in public schools or their dislike of Christmas displays in the public square? How about leftist Hollywood’s routine depiction of Christians as fanatical lunatics? Remember when the Democratic National Committee denounced God in three votes and took the word and concept of God out of the party platform at the 2012 convention?

If you don’t like my anecdotal impressions, what do you make of the Pew Research Center’s reporting that just 45 percent of Democrats believe in the God of the Bible and a significantly lower percentage of white Democrats do? According to Pew, “in their beliefs about God, nonwhite Democrats more closely resemble Republicans than white Democrats.” (This fact alone, coupled with Kanye West’s admiration for Donald Trump, should have Democrats quaking in their boots — but I digress.)

If Democrats don’t want to be perceived as being anti-Christian in their attitudes and policies, they’d better regroup, because plenty of people have taken notice. You can’t convince me they’re unconcerned about it, or they wouldn’t spend so much time defending themselves against the charge. They definitely don’t want Middle America to believe these things about them, so they’ll continue to deny their prejudice during election season, but one of these days, to quote one of their Christian icons, their chickens will come home to roost.

David Limbaugh is a writer, author and attorney. His latest book is The True Jesus: Uncovering the Divinity of Christ in the Gospels. Follow him on Twitter @davidlimbaugh and his website at www.davidlimbaugh.com.