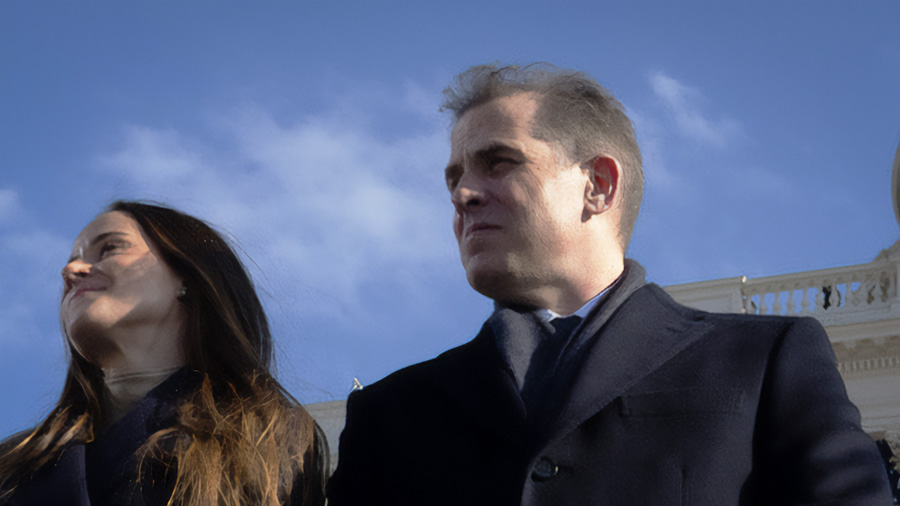 Hunter Biden, right, and Ashley Biden, left, look on as their father Joe Biden, not pictured, takes the oath of office as President of the United States on Jan. 20, 2021, in Washington, D.C.

With all that’s been discussed about Hunter Biden’s laptop — what it reveals about the Biden family and the shocking lengths to which government agencies, politicians, and the media lied, at least until Biden was safely in office — there’s yet another aspect to the story, one we touched on last week but would like to examine more deeply now.

The Casts of Characters Overlap

Doesn’t it seem like an odd coincidence that the very parts of the world that are exploding now are the ones the Biden family was greatly profiting from; namely, Ukraine, Russia, and China? (For this discussion, we’re focusing on Ukraine.) This is why voters deserve to know all about a candidate’s potential conflicts of interest before putting him in office.

And doesn’t it also seem weird that the same people whose names we first heard during Trump‘s first impeachment, some of them officials at the U.S. Embassy in Ukraine, are now popping up in revelations about the Trump/Russia Hoax? The two casts of characters overlap — why is that?

These people were all working together, folks, and that’s the real “collusion.”

It has long been known by people in government that the corruption in Ukraine made it possible for some Americans to profit hugely. Hunter Biden is an easy example, but numerous people with marketable influence in both parties have apparently used corrupt institutions in Ukraine as their own personal ATM, laundering huge piles of cash as they changed hands for various reasons. Nobody asked questions. The elite members of this club brought in their families, friends, and colleagues. It has been going on for decades.

NOTE: As we’ve said before, the corruption in Ukraine in no way excuses the cold disregard and unforgivable violence Putin has shown to its people, most of whom were just trying to make a living and support their families and communities. Russia is chock-full of corruption as well. So is America, for that matter, as we’re learning more each day. Those who use Ukrainian corruption to rationalize what Putin is doing are trying to defend the indefensible.

That said, it’s also important to recognize that what we’re seeing of the corruption is just the tip of the iceberg. Imagine if Hunter had somehow dimly remembered his laptop was at the repair shop and had managed, in his drug-addled state, to crawl his way back there and pick it up. Life would have gone on, with most of us likely never knowing the extent of Biden family graft. Maybe a few dedicated reporters like Miranda Devine and Peter Schweizer would have succeeded in nibbling around the edges, perhaps written books that conservatives would read, but that would’ve been it.

Likewise, what if Hillary’s use of a private server as Secretary of State had never been exposed? What if Guccifer had never hacked into Sidney Blumenthal’s account and ended up with her private address on classified emails about Benghazi, and if State Department lawyers hadn’t noticed that address themselves and looked into it? Hillary’s criminal (yes) use of a private server for classified official business would have remained a secret. With her load of baggage lightened, she might’ve been elected President after all. At any rate, she would’ve gotten away clean.

Some of my readers — I know, because they write to me — are thinking, “Well, she did get away clean. Why do we even bother talking about these scandals? Nothing ever happens.” At the risk of sounding like Hillary herself, they carp, “What difference, at this point, does it make?”

After the Lies. What’s Next?

I would argue that it makes a tremendous difference that we don’t just live with the lies. Those of us who’ve been investigating this for years are at last breaking through to the public at large, who only now are learning what we’ve known for some time: that a reasonable prosecutor would have taken Hillary’s case; that there really are deep-state actors in our bureaucracy; that the Bidens — including “the big guy” — are corrupt; that “Russia” was a hoax all along; that the laptop is real and the FBI withheld it during Trump’s impeachment; that social media is a leftist propaganda arm; and that some people who say they care about “our democracy” really just want to keep their personal gravy train rolling. Americans are wising up. The next step (and it’s a loo-loo) is to acknowledge that suppressing the laptop was election interference, likely changing the outcome of the Biden-Trump race.

Incidentally, Barr also says that Biden knowingly lied about the laptop being Russian disinformation. He was “shocked,” he says. Barr tells us this … now??

According to investigative reporter Peter Schweizer, the timing of the admission in The New York Times that the laptop is real, with the coordination we might assume they had with Hunter’s legal team and the White House, indicates to him that Hunter is likely to be indicted. (So, does he then get pardoned by his father?) Jonathan Turley, in an interview with Brian Kilmeade Monday night, agreed. “There’s only so long you can deny something that’s staring you in the face,” he said. He noted that since they’ve finally acknowledged it’s real, we can move forward to talk about what it means.

Which brings us back to Ukraine. Mollie Hemingway’s book Rigged, the chapter “Burying Biden Corruption,” details not only Hunter’s profits in Ukraine “serving” on the Burisma board but also how committee chairman Adam Schiff made sure this was never brought up in the impeachment hearings, as it would’ve justified Trump’s “impeachable” phone call to President Zelenskyy. The word “rigged” applies just as well to that sham impeachment as it does to the election.

Dan Bongino has been talking about the curious re-emergence of the same Ukrainian names we heard during the impeachment. He dug up an article in Politico from November 2019, about Ukrainian-American DNC political consultant Alexandra Chalupa wanting to “raise the alarm” about Trump campaign director Paul Manafort’s alleged Russian ties. Recall that Manafort was forced to resign, and later hounded by Robert Mueller’s special counsel, over the so-called “black ledger” of payments supposedly made to him by a pro-Russia political party in Ukraine — a ledger that has been determined to be fake. What Politico said at the time about Republicans trying to hold back “a mountain of emerging evidence” that showed Trump “used his leverage over Ukraine to pressure the country’s leaders to investigate his political rivals” seems laughable now. What a waste of our nation’s time and taxpayers’ money.

Let’s see … I can think of an American VICE-President who used his leverage to pressure Ukraine’s leaders not to investigate someone. That was Joe Biden.

A photo turned up of Chalupa in the White House, standing next to the man identified as the impeachment “whistleblower” over Trump’s phone call. Recall that we were never supposed to say his name, but we did: Eric Ciaramella. The big take-away: These people were all working together, folks, and that’s the real “collusion.” Remember this about Ciaramella, from Paul Sperry?

Look for our Part 2 tomorrow. In the meantime, we recommend two chapters in Bongino’s 2020 book Follow the Money: The Shocking Deep State Connections of the Anti-Trump Cabal: Chapter 1 — “Insane in Ukraine,” and Chapter 8 — “Whistleblowing in the Dark.”