The Day US Troops Saved Me and My Friends From Terror 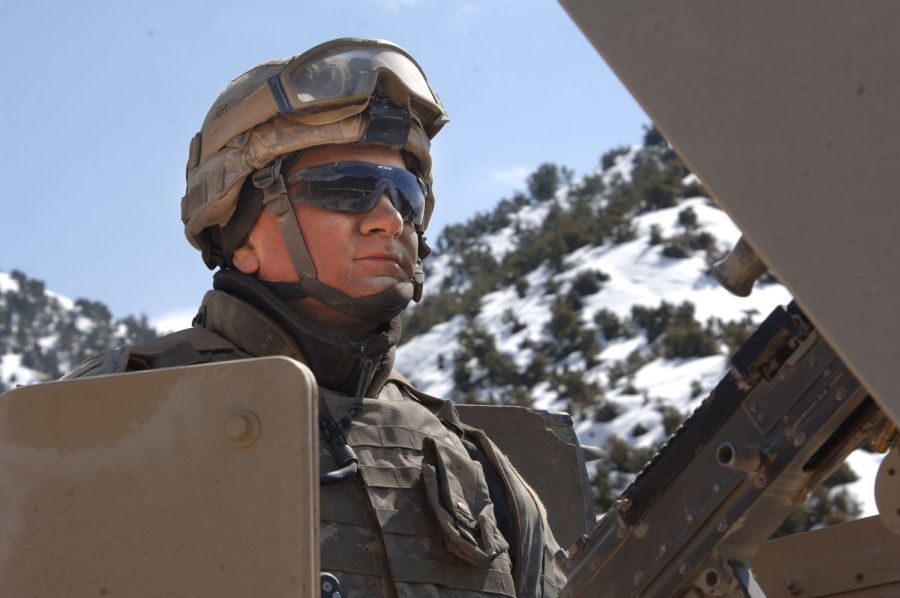 U.S. Army Spc. Victor Piacente, of 1st Battalion, 102nd Infantry Regiment, Connecticut National Guard, scans his sector while his convoy stops for a break during an extended patrol in the Gardez province of Afghanistan March 16, 2007.

A hail of bullets rained down from the skies overhead, hitting the ground in front of the U.S. Embassy in Kabul, Afghanistan. The rapid-fire artillery sounds filled my ears as I stood still underneath the small embassy awning.

Naively, I didn’t know that bullets fired into the air could travel up to a mile high. Then, depending on the angle they were fired at and their aerodynamics, anyone hit in the embassy courtyard would be dead.

Standing in front of the embassy, I could feel the tightness in my quadriceps from the fear.

“Teacher,” one of my Afghan workshop participants shouted to me, “don’t stand in front of the embassy! Get to the bomb shelter! We’re being attacked!”

It was lunchtime on the Friday before Memorial Day weekend in 2006. I was in Kabul for the third time, and it was my final day of the professional leadership development training I conducted before the holiday weekend.

Twenty-four Afghans successfully completed my two-week workshops. They were to receive a certificate of completion during a ceremony with an embassy official present.

To celebrate, we planned to have local cuisine together in an Army “hooch” (a temporary shelter), where the cuisine was served, have some cake, and play some Afghan music.

The successes of my previous two visits for training prompted the U.S. Embassy in Kabul to ask me to come back again to provide another series of workshops for the locally engaged staff, formerly referred to as “Foreign Service nationals.”

The workshops included basic and advanced communications skills training, conflict resolution, and negotiation skills. I also offered professional one-on-one or small group coaching for Afghans who needed extra help with how to understand — and to get along with — their American diplomat bosses.

My days at the embassy compound started with a 7 a.m. breakfast. I went early to see our U.S. troops coming in to eat after staying out all night in the mountains fighting the Taliban.

The men, most of them no more than 19 to 21 years of age, were dusty-looking, with tired faces. After eating and a few hours of shut-eye, the troops went back to fighting.

Sometimes, we engaged in small talk about what was happening back in the U.S. With total respect, “Ma’am” seemed to be every other word spoken to me, as often as the words “please” and “thank you.”

These men made up the majority of the International Security Assistance Force of a NATO-led security mission in Afghanistan, established by the U.N. Security Council in December 2001 in response to the attacks on 9/11.

Afghan Allies With a Price on Their Heads

The Afghan men and women of the embassy and the U.S. Agency for International Development were considered traitors by the Taliban.

Each of my Afghan class participants who worked for the U.S. Embassy and USAID had bounties on their heads. Although they were the higher-paid Afghans working for our government, they exited the gates of the embassy’s sovereign U.S. soil at great risk that they could be killed.

To make matters worse, their families were added to the Taliban’s hit list as well. These men and women took a great chance believing in our country, Operation Enduring Freedom, and Afghanistan’s freedom and security.

Amid a pause in the gunfire, I quickly scurried across the courtyard to the tunnel that connected the U.S. Embassy to USAID and the living quarters. From a security perspective, it was built to sustain a significant mortar hit or a bomb blast. The tunnel was deep and wide enough to hold embassy and staff personnel.

When I entered, there was a young man in his early 20s barking out orders for a number of us to be quiet and listen.

He gave us commands on what we needed to do to, which included leaving the tunnel, which I originally entered for safety. In my mind, I exclaimed, “I don’t want to go back out into the line of fire again!”

However, since my life and the lives of embassy personnel and other contractors were at stake and completely dependent on our U.S. troops, we shook our heads in agreement and obeyed.

At that point, you could hear more activity going on until another lull in the gunfire. The young man, now accompanied by other fully armed troops, quickly led us out of the tunnel and into the embassy to safety.

Gurkha warriors from Nepal were our partners and helped to guard our embassy. They were short, stout, serious men who were extremely loyal to the United States.

The young commander told one of the Gurkhas that if he saw unknown activity on embassy property to shoot to kill — no questions asked. In response, the Gurkha saluted in agreement.

Inside the embassy, we were split up, according to security clearance. Then-Ambassador Ronald E. Neumann, appointed by then-President George W. Bush, spoke fluent Dari to the Afghan staff who were also protected inside the embassy.

For four hours, there was fighting. Fifteen Afghans who attacked the embassy were killed.

Before the cellphone lines became jammed, I was able to get one quick call out to my parents to tell them we were being attacked. (I think the shock of the information I shared with them didn’t register until much later.)

At the end of the fighting, I had a headache, felt lightheaded, and my body was limp, realizing what had just happened. I went to my hooch and fell asleep.

The next day was Saturday. I went to every service member I saw and felt compelled to thank them for saving us. I cried uncontrollably and could not keep a straight face. I also thanked the Gurkhas, who guarded the embassy doors, and cried again.

It was trauma I was experiencing, but it was also a gratefulness I couldn’t explain.

I was overcome realizing the sacrifice these troops make because they zealously believe in what it is to be an American, to protect and serve, and to risk (and possibly give) their lives for our freedom and to fight against evil terrorists. (Yvonne Davis with U.S troops at the embassy in Kabul. Photo courtesy of Yvonne Davis)

My Small Show of Thanks

There are nearly 19 million military veterans alive today. They fought and served honorably. These true heroes and heroines must always be deeply appreciated for their service and the lives they were prepared to risk, all for the ideal of American freedom and democracy.

Last month, I ran in the Army Ten-Miler road race for the second time, beginning at the Pentagon. Just prior to the start of the race, and after the national anthem, Black Hawk helicopters flew overhead. They stayed with all 35,0000 of us runners along the route. We all knew we were in the safest place on the planet.

I come from a family of military heroes, and I still get choked up remembering my experience in Kabul and how those of us who were there would not be here today were it not for them.

Taking part in the Army Ten-Milers is my small way of thanking the troops I will never meet for what they do for our country, our world, and what they did for me personally. Yvonne Renee Davis is a foreign policy contributor for The Daily Signal. During the George W. Bush administration, she served as a contractor for the State Department and a speaker for the Speaker’s Bureau. Follow her on Twitter at @Teleos1