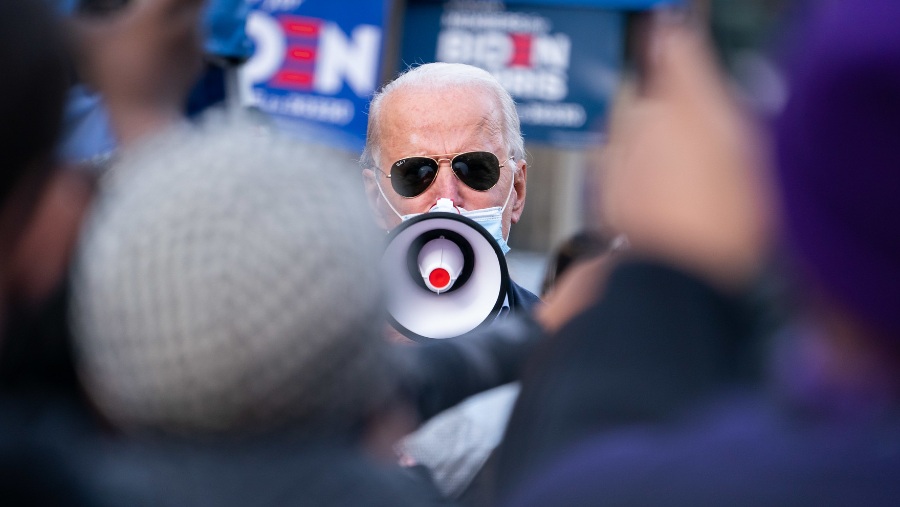 In this Nov. 3, 2020, file photo, Joe Biden speaks to supporters in Philadelphia, Pa., on Election Day.

By Marjorie Dannenfelser Published on December 3, 2020 •

In the aftermath of a singularly high-stakes election, as President Donald Trump fights to ensure that every legal vote is counted, Joe Biden claims to want to unify our nation and even “heal” our collective soul. There is ample reason for skepticism. By all indications, Biden and Kamala Harris have not changed their plans to lead from the extreme Left on issues like abortion, contrary to the will of the overwhelming majority of Americans.

The abortion lobby spent unprecedented sums to elect Democrats. They expect swift fulfillment of their wish list. We must not underestimate the damage a pro-abortion White House could inflict through personnel choices, executive orders, and regulatory actions.

Personnel is policy, and President Trump assembled a pro-life dream Cabinet. Vice President Mike Pence recently became the first sitting vice president to visit a pro-life pregnancy center, while Alex Azar and Mike Pompeo have led a united front in domestic and foreign affairs, standing up to pro-abortion radicals at the United Nations and spearheading a multinational coalition to assert that no international “right” to abortion exists. In contrast, a potential Biden Cabinet would most likely be stacked with abortion industry cronies, with disastrous results.

The Threat to Unborn Children and Their Mothers

First on the list of executive orders is the reinstatement of taxpayer funding to groups that promote abortion overseas. President Trump took the pro-life Mexico City Policy to a unique new level, expanding it to include all global health aid. His State Department even ceased working with foreign NGOs engaged in the abortion business. Biden could restore funding on day one and make the United States the world’s top abortion exporter again.

Next is the reinsertion of abortion in family planning. Under President Trump, for the first time ever, abortion giant Planned Parenthood forfeited $60 million in Title X funding. Also for the first time, pro-life pregnancy centers were welcome to apply for Title X funds. A Biden administration could force these centers to be involved in abortion or risk losing federal aid.

Pro-life conscience protections, strengthened under President Trump, would also be on the chopping block. No one — not pro-life health care workers, or religious organizations, or moral objectors like Susan B. Anthony List — should ever be coerced to participate in the destruction of innocent human life. Biden has promised to force the Little Sisters of the Poor to provide abortion-inducing drugs in their health plans.

Biden and Harris have both endorsed the idea of using the executive branch to scrutinize (and presumably reject) pro-life legislation brought forth in the states. Their authority to carry out this aggressive violation of the separation of powers is dubious at best. Like Roe v. Wade, it would prevent the people and their chosen representatives from enacting a variety of popular pro-life laws, like bans on discrimination abortions targeting unborn children with Down syndrome, or laws requiring parental involvement when minor girls seek abortions.

Perhaps most dangerous of all, abortion advocates are pushing to roll back Food and Drug Administration (FDA) medical safety standards for chemical abortion drugs. According to Charlotte Lozier Institute, abortion drugs are driving a worrisome uptick in the number of abortions nationwide. A Biden-Harris administration could convert every post office and pharmacy into a virtual abortion center — a longtime goal of the abortion industry, which prioritizes profits over health and safety. The threat to unborn children and their mothers is staggering.

What can pro-life advocates do? The unfortunate reality is that we have little to no control over executive actions. However, we can work to stop the White House and congressional Democrats from eliminating the filibuster, expanding the Supreme Court, creating new pro-abortion states, or rolling back longstanding pro-life policies like the Hyde Amendment that save millions of lives.

House Democrats retained their majority, but it is significantly narrower. In a strong rebuke to Nancy Pelosi and Chuck Schumer, the American people sent a record number of pro-life women to Congress — 10 of whom flipped seats from blue to red.

In the Georgia runoff elections this January, we have a crucial opportunity to send the same message and keep Sen. Chuck Schumer and his allies out of power. Susan B. Anthony List’s team is going all in to re-elect pro-life Sens. Kelly Loeffler and David Perdue, working to reach one million voters to preserve the Republican majority that will serve as a firewall against efforts to expand abortion via Congress.

At the state level, we can work with lawmakers and other allies on strategies to challenge Roe and to stymie the expansion of chemical abortion.

Biden and Harris clearly have no mandate to impose their deeply unpopular abortion agenda. We must remain vigilant and continue calling out their extremism, but if the 2020 elections prove anything, it is that we can win the long-term battle for life.

Marjorie Dannenfelser is president of the national pro-life group Susan B. Anthony List and author of Life is Winning: Inside the Fight for Unborn Children and Their Mothers.

The views and opinions expressed in this commentary are those of the author and do not reflect the official position of the Daily Caller News Foundation. Content created by The Daily Caller News Foundation is available without charge to any eligible news publisher that can provide a large audience. For licensing opportunities of our original content, please contact [email protected]