The Dangers of a Digital Bible 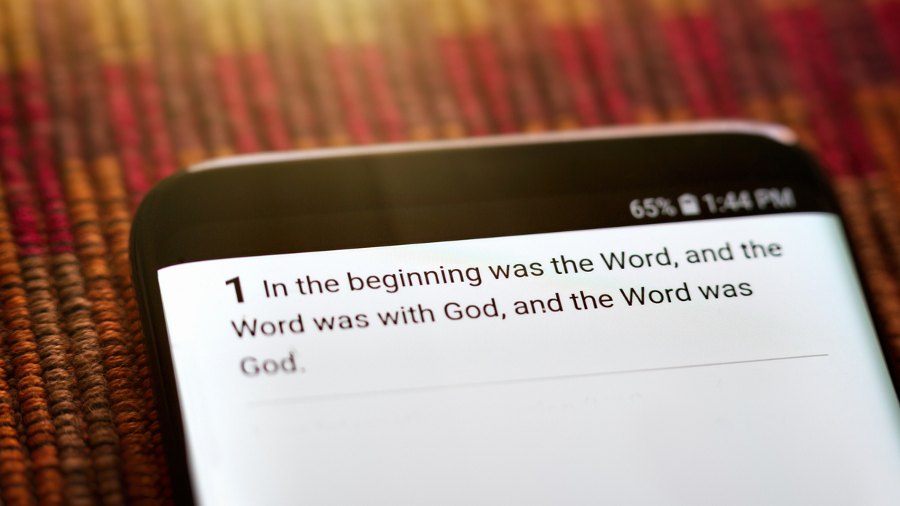 When I refer to the dangers of a digital Bible, I mean “digital” in two different ways. First, it is about the practice of interpreting the Bible as a collection of discrete packets of information instead of a continuously flowing narrative. Second, it is about the way the Bible, like every other kind of written communication, has been digitized so that we can read it on our electronic devices. There are dangerous aspects to both of these forms of digitization. And every Christian needs to be aware of them.

It’s hard for us to imagine not having chapters and verses in the Bible. We’ve never seen a Bible without them. But they haven’t always been there. Though earlier versions of the Old Testament contained chapter divisions, the first translation of the New Testament to include verses within those chapters was the Geneva translation of 1557. Chapter and verse divisions first appeared in the whole Bible three years later.

Chapters and verses are convenient. They make it easy to locate our favorite passages and memorize them. Some of those chapter-and-verse combinations have even become icons of the faith — a kind of mini-sermon on a sign.

But there are dangers that come with isolating sections of any written document and using them to make a point, even if it’s a good one.

Apologist Greg Koukl has said that the most important lesson he could ever teach any Christian is that they should “never read a Bible verse.” That sounds like a weird thing for someone who cherishes Scripture to say. But Koukl says that precisely because he cherishes Scripture.

It’s important to understand not only that the Hebrew Old Testament and the Greek New Testament didn’t contain chapters and verses, but that they didn’t have punctuation at all. The format in which they were written was a continuous flow of thought. We’ve added divisions in the text to appeal to our modern sensibilities. And there’s nothing wrong with that — unless you forget that you did it. Our propensity for extracting one-liners from the text means that we frequently take them out of context. The meaning of a phrase or sentence can change dramatically if you isolate it from the narrative in which it was written.

The minimal level of analysis that should go into interpreting a passage of Scripture is understanding the genre in which it is written. As an example, take the popular idea to: “Train up a child in the way he should go; and when he is old he will not depart from it” (Proverbs 22:6). It’s a proverb — a “wise saying.” It’s not a promise. And there are plenty of Christian parents with rebellious children who will attest to that fact.

Historical narratives, poetry, theological treatises, and circular letters addressed to churches are all completely different forms of writing. And the audience matters. Old Testament exiles in Babylon are not New Testament Christians suffering in Jerusalem, for instance. The purpose and form of the narrative matter.

The only place where people will quote a single sentence or phrase from a book as authoritative is when it’s in the Bible. But nobody thinks like that. You wouldn’t do it with any other book you’ve ever read. If you’re confused about how to understand a particular verse, the simple act of reading the entire paragraph in which it is embedded will often clarify its meaning. Always read at least a paragraph. Sometimes, it takes a chapter. But in every case, you have to take into account the context of the book in which the passage appears.

Along the same lines, most of our Bibles today include section headings meant to summarize what will follow. Ignore them. The original authors didn’t put them there. And they can be misleading. In fact, they sometimes interrupt a line of reasoning that is supposed to follow from a previous passage. A subtitle can thereby separate thoughts that were not meant to be separated.

Thomas Jefferson famously cut out all the references to miracles or the resurrection in his personal Bible. He didn’t accept that things like that could be true. So, he got rid of them. His version of the New Testament was only 84-pages long. But doing that took a lot of time and effort on his part. Imagine if he had an electronic version of the Bible. Cutting and pasting would be way too easy.

Don’t like some “judgmental” idea you read about in Romans 1? Right-click -> Select -> Delete.

This illuminates the second kind of danger that comes with a digital Bible: If it’s electronic, it’s not reliable.

Don’t get me wrong. I have the Bible on my phone and on my computer. This is not some old-fashioned Luddite declaration that the only kind of Bible you should own is a real one that you can hold in your hands. Personally, I prefer actual books to digital ones. But that’s not my point. The problem with a digitized Bible is that it can be so easily altered by those who control the platform on which it is delivered.

To those of us who grew up with an actual book, this issue is not as big of a deal. We’ve read the real words and would recognize if they were changed or missing. But in a world of only e-books and Kindle Bibles, how do our grandchildren — or, worse, our great, great, great, great-grandchildren — have any guarantee that the Bible they’re reading is the one the disciples wrote? For that matter, what happens if we reach the day when the Bible is only available in electronic form … and the powers that be don’t approve of it at all?

In 2 Timothy, Paul exhorts us not only to “continue in what you have learned and have firmly believed, knowing from whom you learned it” (2 Timothy 3:14), but to “guard the treasure that has been entrusted to you” (2 Timothy 1:14). The treasure is in the form of a collection of inspired manuscripts we call the Bible.

Ideas matter. And the ideas God wanted to be preserved are expressed in the words the original authors wrote down. That’s the only standard that should concern us. Pithiness, convenience, and cultural acceptability have no bearing on the message God meant to convey through Scripture. And that’s why, no matter how many ways we find to do it, digitizing the Bible is a bad idea.

If you’re interested in a short video course on how to interpret Scripture, the Bible Project guys are a fun, informative resource. Their “How To Read The Bible” videos are a great introduction.

If you’d rather hold a book in your hand, I highly recommend these two outstanding books: How To Read The Bible For All It’s Worth, by Gordon Fee & Douglas Stuart and Playing With Fire, by Walt Russell.

Why the Bible? — Colin Smith on LIFE Today Live