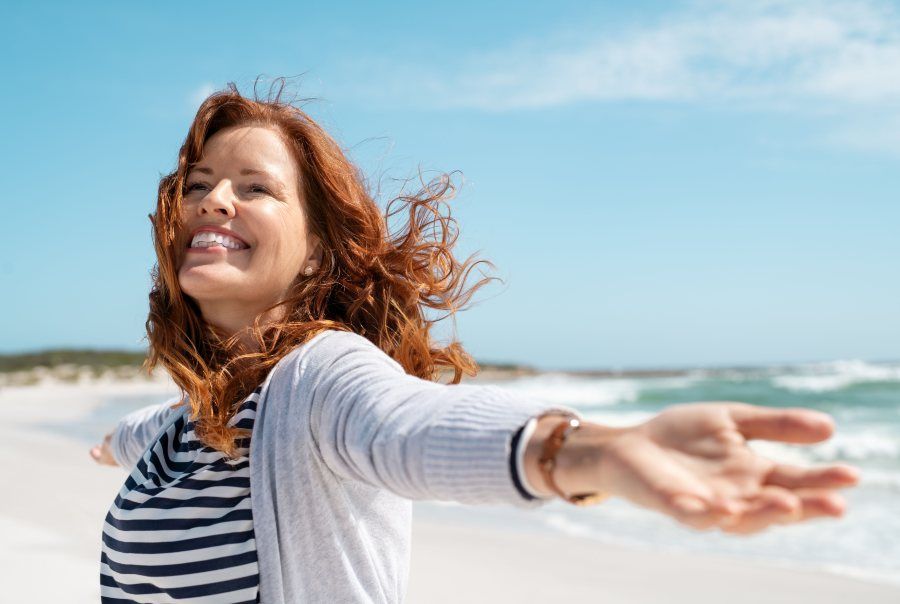 Have you ever been around a miserable, mean person? Someone who emits real negativity, and when you’re in their space it kind of sucks the life out of you? It’s as if they’re a black hole that might drag you in if you get too close, so something in you says to stay away. That is a person who chooses over and over to stay in their pain. It may have been one big choice or a million little ones, but each time the chance to choose joy arises, the decision is made, instead, to continue down the path of hurt and bitterness.

Now, let’s be clear: l am not saying we aren’t meant to experience sadness or grief. Of course we are. I am also not speaking to those who suffer with debilitating mental illness or chronic depression. But for many people, there comes a point in your journey of pain and loss when you have to make a choice between embracing happiness or staying in your despair. If you want to climb out of the darkness — out of that pit of sadness — you have to be purposeful about it.

Had My Doctor Lied?

Many years ago I went to my first radiation appointment. I was nine months into my breast cancer treatments, and radiation was the final phase. Six weeks earlier l’d had my mastectomy, and for six awful months before that I’d endured chemotherapy. The first signs of hair were beginning to grow on my head, and I was oh-so-ready for this final stretch.

I arrived at the treatment center and was sent into a dressing room. I took off my shirt and bra and put on one of those incredibly attractive hospital gowns that tie in the back but never seem to work correctly, so you constantly fear a bit of naked is showing through. Praying that nothing too upsetting was hanging out, I entered the pretreatment waiting area and sat down.

Directly across from me was a woman who appeared to be in her late fifties. She had all her hair, had a plump figure, and her face was full of healthy color. She looked at me and asked, “ls this your first radiation treatment?”

“Well, I have to tell you, it’s hard,” she said. She let out a big sigh. “The first week you will feel fine, and then you’re going to get incredibly tired and you won’t be able to function, and your skin is going to be so burned you won’t be able to wear clothes. I don’t even know how much more of this l can take.”

I was stunned. That wasn’t at all what I was expecting. My oncologist had assured me that this was the easy part. Had he lied just to keep me going?

The woman told me she was seventeen rounds in and had only three more to go. I needed thirty-three, and her uplifting chat was sending me into full radiation freak-out mode.

About two minutes later, they called me back. l entered the room and lay down on the table. The technician marked up my breast with a Sharpie and aimed the radiation machine at my chest. The machine was on for eleven seconds in three different angles and l was done. Two minutes, tops. That was it.

The next day I returned, same routine, only this time sitting across from me was a frail, bald, white woman who looked painfully thin. I couldn’t tell her age because she was in the throes of such sickness, but I would have guessed around seventy. She smiled immediately, her sickly face brightening as she said hello.

“How many rounds have you done?” she asked.

“One,” l replied cautiously, fearful to hear another horror story of what was ahead.

She waved her hand like she was shooing a fly. “Oh, honey, this is nothing. lt’s a breeze. Today is my last round of thirty-three. Compared to what we’ve been through, this is a walk in the park.”

l wanted to let out a burst of relief tears but managed to hold it together. As we talked a little more, I learned she had been battling cancer for years, in and out of hospitals, and yet I could see the way she chose to be a joyful light to others.

One chose joy, one chose misery. Physically, this second woman was suffering more than the previous day’s lady, but nonetheless she chose to find the light in her day. She chose to lift me, even in the midst of her pain.

Choosing to Speak With Joy

It would take almost an entire year before I fully understood the significance of her choice to speak with joy. That is when I too reached thirty-three rounds of radiation. I found myself exactly where that kind, frail woman must have been that day. l was exhausted, tired of being tired, and my skin was burned and blistered so badly that even the slightest brush of fabric was excruciating. I realized she must have been feeling just like this, and yet she had spoken to me with a smile, breathing belief into me, even through her own suffering.

Finding joy in your life does not mean you walk around in a perpetual state of skipping and laughing. It doesn’t mean you are grinning and waving to every single passerby, although that would be fun. It means when you are sitting in the pain, you can take a deep breath and smile because God gave you one more breath to live.

Joy, my sweet friend, is your choice. It can be a little choice or a big choice, but it is yours and yours alone.

Dawn Barton tells more of her story this Thursday on LIFE TODAY. Excerpted from Laughing Through The Ugly Cry by Dawn Barton. Copyright © Dawn Barton. Used by permission of Thomas Nelson.