The Battle of Middlebury 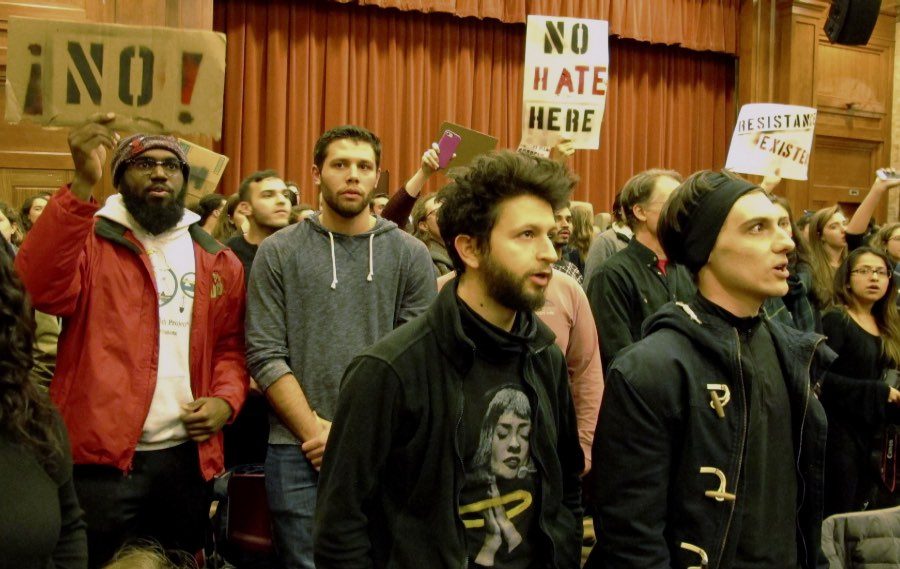 Middlebury College students turn their backs to Charles Murray, unseen, who they call a white nationalist, during his lecture in Middlebury, Vt., Thursday, March 2, 2017. Hundreds of college students on Thursday protested the lecture, forcing the college to move his talk to an undisclosed campus location from which it was live-streamed to the original venue, though it couldn't be heard above protesters' chants, feet stamping and occasional smoke alarms.

In a significant escalation of the campus speech wars, protesters hooted down the conservative scholar in a lecture hall and then roughed up a Middlebury faculty member escorting him to a car.

The Middlebury administration commendably tried to do the right thing and stand by Murray’s right to be heard, but was overwhelmed by a yowling mob with all the manners and intellectual openness of a gang of British soccer hooligans.

Sometime soon, we may yearn for the days when college students were merely childish and close-minded. If campus protests of speech begin to more routinely slide into violence, Middlebury will be remembered as a watershed.

First, there was the target. Charles Murray is controversial — mainly for his book The Bell Curve, about IQ — but he is one of the most significant social scientists of our age. He is employed by the prestigious conservative think tank the American Enterprise Institute, and his books are highly influential and widely reviewed. His latest, which was to be the topic of his Middlebury talk, is Coming Apart, a best-selling account of the struggles of the white working class that illuminated some of the social forces behind the rise of Donald Trump.

No one is bound to accept any of Murray’s ideas, but they are inarguably worth engaging. He exists in a different universe than Milo Yiannopoulos, the alt-right provocateur infamous for saying or doing anything to try to get infamous. That Middlebury protesters can’t tell the difference between the two shows that their endeavor to know or understand nothing outside their comfort zone has been a smashing success.

Second, there was the venue. No one has ever mistaken Middlebury, a small Vermont liberal arts college founded by Congregationalists, for Berkeley. It doesn’t have a reputation as a hotbed and training ground for rabble-rousers, and yet has given us one of the most appalling episodes of anti-speech thuggery in recent memory. If it can happen at Middlebury, it can happen anywhere (or at least at Swarthmore or Bucknell).

Finally, there was the violence. The students who brought in Charles Murray framed the evening as “an invitation to argue,” and in that spirit asked professor Allison Stanger, a Democrat in good standing, to serve as Murray’s interlocutor. When chanting students commandeered the lecture hall, Stanger and Murray repaired to another room for a live-streamed discussion. Protesters found the room and pounded on the windows and pulled fire alarms. When Murray and Stanger exited at the end of the live-stream and headed for their get-away car, protesters assailed them. They shoved and grabbed Stanger, who was shaken up and later went to the hospital, and pounded on the car and tried to obstruct it.

Stanger wrote afterward that she “feared for my life.” And for what offense? Talking to someone who thinks differently than the average Middlebury faculty member or student.

Political correctness has been a phenomenon on campuses since the 1980s, but now has become much more feral. The root of the phenomenon is the idea that unwelcome speech is tantamount to a physical threat against offended listeners. If this is true, it follows that dissenting speech needs to be shunned (in safe spaces) and attacked (in protests). Shutting down a speaker and literally running him off campus is, from this warped perspective, an entirely justifiable defensive action.

Of course, speech doesn’t threaten anyone. The appropriate response to an erroneous argument is counterargument. And the free exchange of ideas always allows for the possibility that someone will actually learn something.

If campuses aren’t to sink further into their current miasma of illiberalism, administers will have to actively fight the tide of suppression. It’s not enough to say the right things about free speech; they have to punish thuggish student agitators. Otherwise, college campuses may become increasingly unsafe spaces for anyone departing from a coercive orthodoxy.

Rich Lowry can be reached via e-mail: comments.lowry@nationalreview.com