The Battered Angel Atop Our Family’s Tree 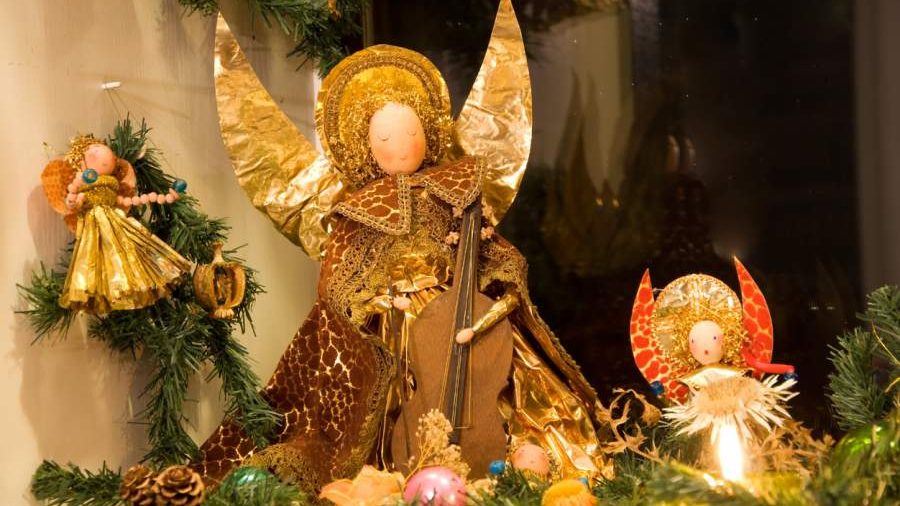 A few Christmas memories stay with me over the decades. Each one carries a meaning, like a tiny piece of parchment in the wings of a dusky brown sparrow. Let me pluck a few out of the air for you, as we all wait together for the coming of the King.

Working with my father and the other men of the Holy Name Society on the church’s nativity scene. The Holy Name Society exists for a very good purpose: To gather ordinary men in a noble cause: promoting respect and love for the “name above all other names,” the Holy Name of Jesus. One way they did that was to meet every month for Mass. The second Sunday of every month, the church would fill up with dads and sons. I remember my father singing the hymns in the odd Irish brogue which he’d picked up as a boy from the Irish Christian Brothers at school. It only kicked in when he prayed or sang. As he belted out those songs in his coat and tie, I’d sing along. Now that he has passed, I can hardly sing them. Classics like “Faith of Our Fathers” or “Holy God, We Praise Thy Name,” just make me break down crying. So I choke up and quietly listen.

Each year we’d screw together the boards for the Nativity scene in the first week of Advent. The next week we’d put in the animals. Then the shepherds. In the last week, the angels and the Holy Family appeared. But the manger would always stay empty, till Christmas Eve. That vacant crib, that kingless throne, sat for a few days like a hole in the world — the hole that our first parents tore, which only Christ could come to heal.

Putting Together the Tree

For a few years, my high-strung mother put up with it: the deadly “fire hazard” of a real pine Christmas tree. I remember helping dad to haul it through the streets of Astoria, Queens. Then we’d schlep it up the four flights of stairs in our tenement, leaving a long trail of needles on the steps. But mom was of the same school of thought as the priests in our parish. For “safety reasons” they’d pulled out all the real wax candles and replaced them with electric ones. Drop the quarter in the slot and a little red light that looked like a flame would flicker in front of the saint. My mother assured me that it carried our prayers up to God just as a real fire would. But I was a skeptic.

Likewise, my mother prevailed, and one year dad brought home an artificial tree. It lacked that amazing smell, and that struck me as sad. But at least we didn’t have to watch it die, then take it like pallbearers back down the stairs as a withered skeleton after New Year’s. No, that tree stayed with us, every year. I’ll never forget how dad would climb up a ladder and take the box down. Then we’d squint for the little color codes painted at the base of every branch — to show us where to put the short boughs, then the long ones. There was actually something special about our annual rite. Together we’d build a tree. Then we strung it with lights and ornaments. The last step was hurling silver tinsel on it like snow.

Dad had this very old angel, which he said came from Bavaria.

It was meant to be gold, I guess. The little silk and tarnished brown angel, that dad always insisted we put on top of the tree. I wanted a big blue and gold glassy tree top, which they sold at the 5 & 10. But dad had this very old angel, which he said came from Bavaria. I doubt it came down in our family, but it had been passed along in someone’s. It spread its battered wings, and its arms reached out in prayer. A tiny brown halo floated behind its head. I thought it was ugly, because it was old. He told me that I was wrong, that old things could be more beautiful than new ones. They carried something with them, he said. They pointed us to our grandparents, and their grandparents before them. Just like the song I loved so much (which I still can’t sing all the way through), “Faith of Our Fathers.”

As the years went by, and I began to be older, and now middle-aged, that angel means more to me than it ever did before. It bears on its fragile back so many years — the very years that Jesus came to sanctify. The time that is the water in which we mortals swim. That water was cold once, dark and desperate. But He came down to warm it. To drive away the monsters  of winter and hatred and death. An angel came to announce Him:

And the angel said unto them, Fear not: for, behold, I bring you good tidings of great joy, which shall be to all people. For unto you is born this day in the city of David a Saviour, which is Christ the Lord.

And now, let me try that hymn again. If I can’t finish it, would you mind doing it for me?

This piece originally appeared at The Stream Christmas 2017. John Zmirak is a senior editor at The Stream, and author or co-author of ten books, including The Politically Incorrect Guide to Immigration.

Christmas Is So Much More Than a Wish