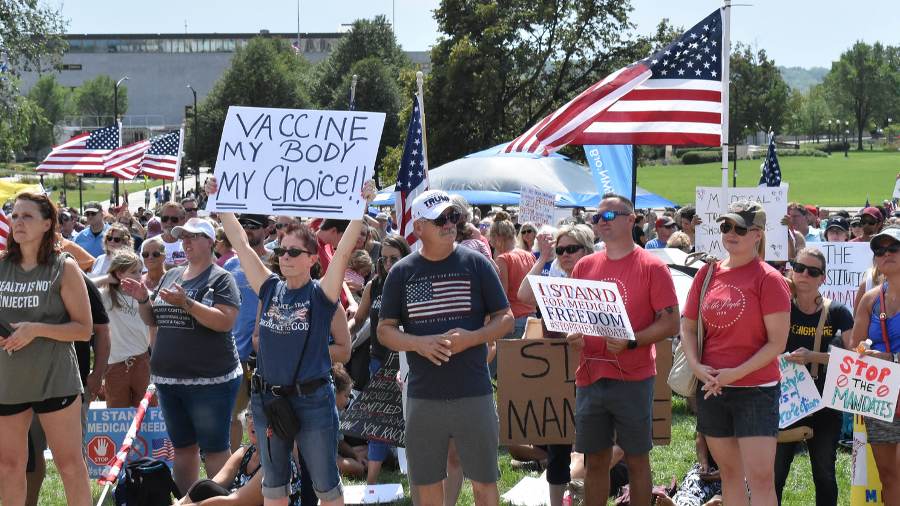 What is it with liberal Democrats treating nursing homes like Godzilla treats Tokyo? First, it was Andrew Cuomo ordering nursing homes to take in COVID-19 patients. Now, with the aging population and the pandemic already creating a shortage of elder care workers, President Biden’s vaccine mandate is set to make it worse.

I told you yesterday about the hospital that was shutting down its maternity ward because so many staffers quit rather than comply with the government mandate. Now, it’s going to affect people on the other end of life, too.

And the backlash against the vaccine mandate is hardly limited to health care workers. A number of state Governors are already planning lawsuits to fight it. A big protest broke out in New York (hardly a bastion of right-wing Trump supporters), and teachers were seen among the protesters.

The situation varies with each individual, which the government doesn’t want to acknowledge.

A new Trafalgar survey also finds that anger is pretty common across America.

There’s also an angry backlash over news that Congress is exempt from the vaccine mandate, although to be fair, Biden has no power to issue such an order to the legislative branch. But some would argue that he also doesn’t have the power to issue it to every business with over 100 workers, but here we are.

The “Uniter” Wields Power With a Caveman’s Club

And it didn’t have to be this way. There are much more effective ways that Biden could’ve helped the U.S. reach herd immunity other than acting like a dictator and assuring that millions of Americans would dig in their heels and say no.

For instance, he might have expressed gratitude to President Trump for facilitating such rapid development of vaccines and asked Trump to join him for a joint effort to promote vaccination (which Trump has done.) But again, demonizing Trump is more important than convincing people to get vaccinated. That’s certainly how Trump sees it.

Biden ran on a promise of being a bipartisan uniter, but all he’s done since taking office is attack anyone who disagrees with him and wield government power like a caveman’s club. What happened to that balloon juice about being the “adult in the room”?

When I was a kid, my mother (the real adult in the room) didn’t get me to eat spinach by threatening me. She told me that Popeye ate spinach and it made him strong, and that did the trick. And having both had the jab and eaten spinach, I can assure you the latter was much less pleasant to a kid.

What This Administration Will Not Acknowledge

We have readers leaving messages in our comments section who are genuinely concerned about the reports they’ve read of serious side effects. They don’t know whether to believe these sources or not. One man mentioned that he’s 78, a prime danger zone for COVID, but he’s afraid to get vaccinated. That greatly concerns me.

I’m not a doctor or a dictator, so I don’t feel it’s my place to tell strangers what medical decisions to make. The situation varies with each individual, which the government doesn’t want to acknowledge. Some people might have a history of serious adverse reactions to vaccines. Many millions have already had COVID and might have natural immunity that’s at least as effective as vaccination, if not more so. Each person has to weigh the risks vs. benefits.

For many people (particularly my reader who’s 78), the risks of COVID infection likely far outweigh the risk of vaccine side effects. They need to talk to their doctors for advice.

In my case, I had respiratory issues that would make COVID extremely dangerous, so I was grateful to get vaccinated, and like the vast majority of people, I’ve suffered no side effects. It’s important to remember that almost nothing is pure black and white. Yes, there are breakthrough cases, but no vaccine is ever 100% effective.

Yes, some people suffer side effects, even severe ones; but that’s a minuscule percentage of the hundreds of millions of vaccine recipients (and there are different vaccines; you might be scared over stories about a vaccine we don’t even use in America.)

The best way to persuade people to get vaccinated isn’t through threats and demonization, it’s through persuasion and education. Be completely transparent and honest, give them the facts, and respect their right to make the best decision for themselves.

Or are all those things beyond this Administration?