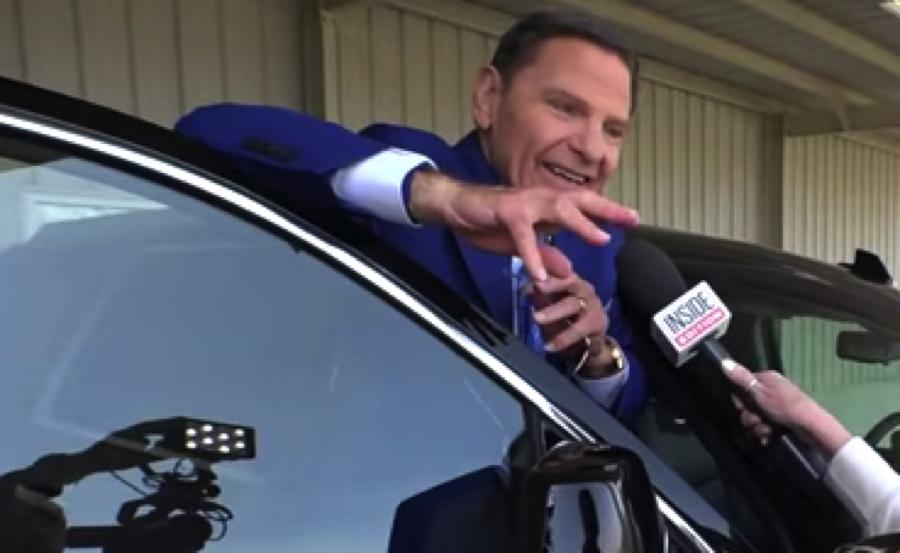 Note: The media is all amped up by an interview television evangelist Kenneth Copeland gave to Inside Edition. More accurately, they are in a feeding frenzy over statements made by the interview-shy 82-year-old after he was ambushed in a garage by a reporter. The news hook is a familiar one … if stale: Bashing Copeland for having a private plane for his non-stop engagements all over the globe. Blowing up an old quote where Copeland said he flies private because he “doesn’t want to fly in a long tube with a bunch of demons.”

The ambushing of Copeland is no surprise. Jesus said, “If they hate me, they will hate you.” And clearly, as Rev. James Robison has written today on The Stream, in the current social climate all Christians are a target.

Like James, Charisma Magazine publisher Steve Strang has known Kenneth Copeland for decades. Last evening, he posted a response to the Inside Edition attack piece.

We reprint it here now:

As a journalist, I understand the media game. So when I saw how Inside Edition did an ambush interview with evangelist Kenneth Copeland — and how it was picked up by the Ft. Worth Star Telegram and Fox News online — I felt I needed to share my opinion. In my view, it was the “same old, same old” journalistic treatment of successful media ministers. At the same time, I believe other Christian leaders should stand with Copeland and let him know we believe he handled the situation well.

Copeland could have closed the door and driven off, and some ministry leaders would have done that. Instead, he answered the questions and talked about spiritual warfare, the Abrahamic covenant, the number of people who have accepted Christ through his ministry and the millions they give to the poor. To me, it was if he was ministering to a brand-new audience on Inside Edition as he showed respect and love to the reporter, even praying for her by name.

Of course, the media that picked up the story reported none of that and instead only focused on his use of a private airplane.

The Integrity of Kenneth Copeland

Kenneth Copeland can speak for himself. He doesn’t need me to speak for him, and no one from his ministry asked me to record a podcast or write this newsletter with my insight on how the secular media covers ministries. In my opinion, this type of journalism is so predictable I could write the story and just leave the names blank. I saw this same thing four decades ago when I was in secular journalism.

Then on the other side, I share on my podcast my unscripted thoughts about the integrity I’ve seen in Copeland and his ministry going back 40 years to when I first interviewed him in 1979.  I interviewed Copeland while sitting in the back of his prop plane all those decades ago. Charisma highlighted Copeland and his ministry on the cover of our June 1979 issue and explored his message of faith and abundant life — a message he has held to faithfully to this day.

Since that interview 40 years ago, I have watched Copeland conduct his life and ministry with integrity. He has consistently preached the gospel, winning as many as 122 million people to Christ, according to what he said in the interview. His ministry has also given millions of dollars to help the poor — something they couldn’t have done if they weren’t as big as they are.

Every person I’ve ever known who works in Copeland’s ministry is of high caliber, ethical and honest. I feel at peace with the way Copeland’s ministry conducts its affairs — to the extent that I support them financially each month out my own pocket.

But the reporter didn’t focus on those good qualities. She focused on one quote from several years ago in which Copeland said he bought his own private plane so that he didn’t have to fly “in a long tube with a bunch of demons.” Those who know Copeland immediately realized his comment was purposefully a little tongue in cheek. And Copeland made it clear that he wasn’t referring to people when he was talking about demons. On the contrary, he emphasized how much he cared about people. Instead, he was talking about the spiritual atmosphere of a public place.

To put it into perspective, he could have said the same thing about Greyhound buses. How many people choose to buy their own cars instead of riding a public form of transportation, despite the lower cost of a bus ticket? We don’t question the motives of people who buy their own cars, yet we question the motives of an evangelist who would prefer to fly in his private plane to minister around the world instead of using a public airline.

Although the Inside Edition reporter had no business asking Copeland some of the questions she did, I believe Copeland was still very gracious with her. When she told him that both her grandfathers were poor preachers who would’ve been appalled at Copeland’s lavish lifestyle, he responded with a smile and thanked God for faithful preachers like them.

We Must Speak Up in Defense of our Brothers and Sisters

The bottom line is that this kind of skepticism and criticism is rooted in jealousy. Unfortunately, there are many people who are jealous of successful ministries. I’ve witnessed the same kind of jealousy in the publishing business and in the media. I’ve even come to expect this kind of criticism from the secular media, but it’s disheartening when it comes from other Christians.

It’s also discouraging to see how few believers came to his defense after the interview came out. I believe Christians should speak up and defend brother Copeland, because if they don’t, the secular world will continue to misconstrue and even demonize his words.

So I encourage you to share this article and my podcast on your social media. Tell people that you don’t think Inside Edition should have treated Copeland that way. Speak up in defense of the many other Christian leaders the secular media berates and accuses. Be the one who is willing to say that biased ambush journalism is wrong.

My Response to the Media Ambush of Our Brother in Christ, Minister Kenneth Copeland

The Media Trashes the Pences’ Church For … Being a Christian Church