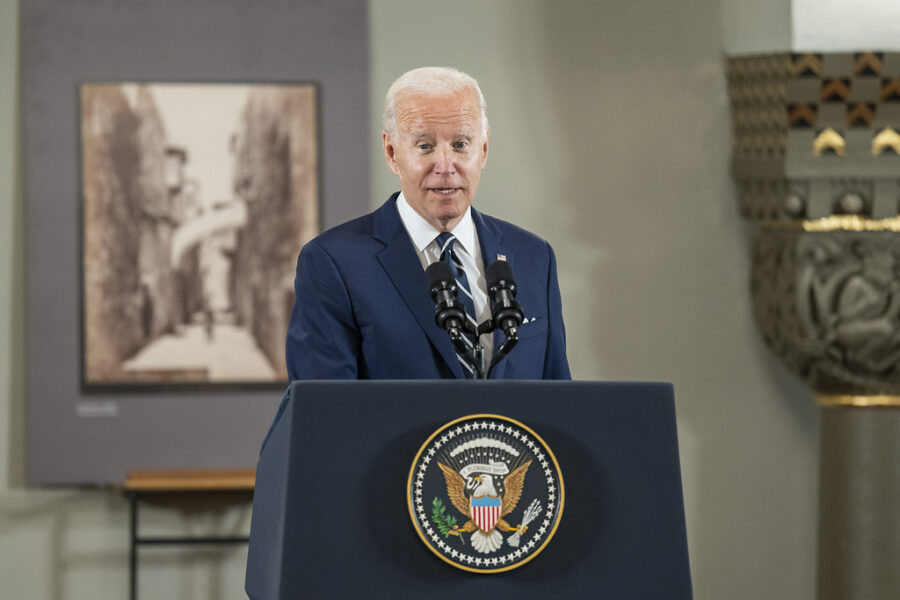 Joe Biden speaks in Jerusalem. Earlier this year, Biden threatened "there'd no longer be a Nord Stream 2" if Putin invaded Russia. This week, someone sabotaged the Nord Stream pipelines.

One Polish official appeared to cheer the suspected sabotage on the Nord Stream gas pipelines Tuesday as his country celebrated the completion of its own northern pipeline project.

European Parliament representative for Poland Radek Sikorski said “Thank you, U.S.A.!” in a tweet Thursday as European Union officials traveled to Goleniów, Poland, to inaugurate their own pipeline project. The partially EU-funded Baltic Pipe project will bring Norwegian natural gas to Poland through Denmark, and simultaneously create an export market for Poland in Denmark.

“BTW, there’s no shortage of pipeline capacity for taking gas from Russia to Western Europe, including Germany,” Sikorski said after comments to his initial statement derided the U.S. for cutting off a potential energy source for Europe. “Nordstream’s only logic was for Putin to be able to blackmail or wage war on Eastern Europe with impunity,” he added.

Sikorski then addressed Russia’s foreign ministry. “Someone … did a special maintenance operation,” he said, referencing the official Russian label of “special military operation” for the war in Ukraine. He shared a video of President Joe Biden vowing to axe Nord Stream 2 if Russia invaded Ukraine.

“All Ukrainian and Baltic sea states have opposed Nordstream’s construction for 20 years. Now $20 billion of scrap metal lies at the bottom of the sea, another cost to Russia of its criminal decision to invade Ukraine,” Sikorski added.

Polish Prime Minister Morawiecki immediately attributed the pipeline damage to sabotage connected directly with escalation of the conflict in Ukraine, according to Reuters.

The CIA warned Germany in the summer of possible attacks on the crucial pipelines.

Poland fought the construction of Nord Stream 2, according to German-language paper Der Spiegel, UAWire reported. The Polish Energy Regulatory Office dispatched a letter to Germany’s economy ministry in 2021 arguing that the pipeline, which would allow Russia to double its gas exports directly to Germany, might “jeopardize the security of gas supplies to certain member states, regions or even the entire European Union.”

Nord Stream 2 was set to come into full operation in early 2022 before German Chancellor Olaf Scholz put a pause on the inauguration as a response to Russian aggression. Since then, European countries have looked to diversify natural gas sourcing away from Russia as the Kremlin steadily crimped gas supply through the Nord Stream 1 pipeline.

An earlier-than-expected date for pipeline completion could bring in double the amount of gas initially anticipated, Reuters reported.

“The Baltic Pipe is a key project for the security of supply of the region and the result of an EU policy drive to diversify sources of gas. The pipeline will play a valuable role in mitigating the current energy crisis,” EU Commissioner for Energy Kadri Simson said in a statement.

Sikorski, the Polish foreign ministry and embassy, Energinet and GAZ-SYSTEM did not respond to the Daily Caller News Foundation’s requests for comment.