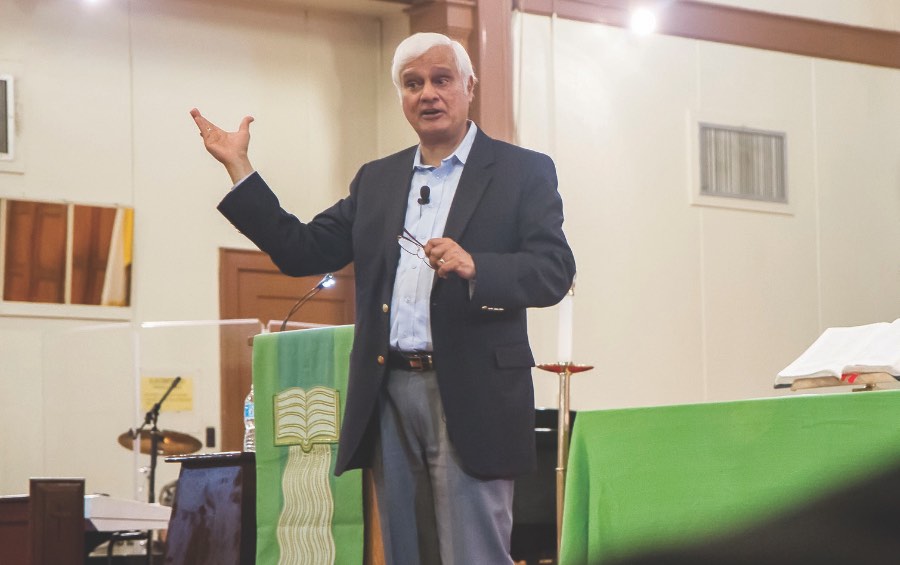 Few people have done as much as Ravi Zacharias — author, speaker, and founder of Ravi Zacharias International Ministries — to advance Christian thinking in our generation. He has made it known that he is in a battle with cancer. It seemed to us at The Stream that it would be fitting at this time to ask other leaders in his discipline of Christian apologetics (the study and communication of reasons for confidence in Christianity) to extend their words of appreciation for his long and influential global ministry.

I count it a great honor to be a close friend of Ravi Zacharias. I do not know anyone who more clearly reveals the undeniable reality of transforming power found in the Gospel of the Kingdom. Ravi’s defense of biblical truth is effective not only because of the wisdom and knowledge he freely shares, but because his life demonstrates the effectiveness found in absolute, unshakable truth.

Those who push back against absolutes find they are not only standing on sand, but quicksand. Their nonsensical belief system immediately swallows them up, revealing how unstable and unsound it is. He presents truth in a clear spirit of unconditional, redemptive love. To say that Ravi is captivating is an understatement! He presents truth in such a way that it moves beyond captivating to actually capture the hearts and minds of all those with ears to hear.

We are all praying together for supernatural healing and a miraculous recovery for our dear friend, Ravi.

It is no exaggeration to say that Ravi Zacharias is one of my heroes. While there are many things I admire about him, two stand out. First, he models what it means to be gracious in his interactions with others. While he is clearly brilliant and well-studied, he always aims to show kindness to others, which is why I admire his demeanor and have often tried to imitate it myself. And second, his faithfulness speaks volumes to my generation. He has stayed firm in his character and commitment to the gospel. In an age when it is increasingly easy to water down the truth, Ravi is an example of bold faithfulness and commitment to truth.

Ravi Zacharias was one of the first Christian thinkers in my life whom God used to shape my passion for truth. His articulation and acuteness at addressing issues combined with his demeanor and compassion are winsome characteristics sorely needed to productively engage the culture. May God multiply Ravi’s impact around the world!

Fond memories of ministry partnership with Ravi go back more than three decades. Some of the earliest go back to Veritas Forums on university campuses where we did tandem presentations. My part was to present compelling scientific evidence for the God of the Bible, and then Ravi would follow with an exquisite articulation of the philosophical and theological implications of this evidence. His eloquence always amazed me, and still does. He can turn a phrase in such a way that listeners even years later readily recall both his words and their impact.

I especially admire the way God has used Ravi to instill confident hope. While some people in his audiences may have failed to recognize, at first, their need for it, eventually they found themselves in desperate need of it, and Ravi’s message would race back to mind and take root. What joy and inspiration have come from watching RZIM grow and flourish as a powerhouse for the advance of Christ’s kingdom — “helping believers think, and helping thinkers believe!” My colleagues at Reasons to Believe join me in upholding Ravi in prayer as he continues to minister in the face of major health challenges. May he continue to bring many to faith in our Savior through his profound words and gracious, Christlike demeanor.

Ravi Zacharias is an inspiration to me and countless others around the world, and has been for decades. I deeply appreciate his heart for God, his passion for truth, and his zeal for the gospel. I’m saddened by his current health situation, but pray that during these challenging days he will sense God’s presence, strength, and even joy — and that he’ll make a full recovery. May God continue to bless, protect, and use our friend Ravi for His redemptive purposes.

Ravi is a prince and giant in the apologetics community, a man of eloquence, grace, and brilliance. And, with his Indian background, he brings a much-needed world perspective. What a joy it is to be able to point seekers and skeptics to Ravi’s words of wisdom.

Ravi Zacharias is one of those people who has left a mark on mankind: we are better than we were without him. He is a man whose wit is only surpassed by his love of people and his love of God. I found refuge in his work, “Can Man Live Without God?” when I had become heartbroken at the hypocrisy I found in church. In that time of searching, he was not just an intellectual sparring partner for me, but a weaver of stories that spoke to the artist in me. I know that so many others can say something similar about his influence in their own lives. Ravi, with his warm smile, kind eyes, theological thoughtfulness, and deep love of Christ, reaches out across generations and cultures. I’ve heard him quoted by teenagers, senior adults, and every age in-between. His works have helped us to understand the difficult questions of life, and to navigate our own lives with grace and truth.

The first time I met him, I was speaking for one of his RZIM Summer Institutes and I had no idea what to say. How do you thank a person for the depth of thought and the expansion of imagination that they have brought to your faith? But I decided I should do so, and as I approached him, he greeted me with that endearing smile and said, “Mary Jo Sharp, you’re a professor at HBU.” While it doesn’t seem like much, the gesture was important because he had taken the time to get to know something about me. He wanted to know me personally. You see, the mark he leaves on mankind is great in works and education, but it is also great in love. If he could know everyone in his audiences personally, I believe he would do so. For he is someone who sees each human being in a manner that reflects how Jesus sees them; Ravi’s love of his fellow mankind is immense. That love pierces the heart of the hardened, brings the heartbroken to a safe harbor, and inspires the imagination of us all. So thanks, Ravi, for your many sacrifices for us; so many of which we may never know.

Ravi Zacharias has for years been an inspiration to me. He has a gift of making a winsome case for the truth of Christianity that is both rigorous, moving, and accessible. I am also thankful for the work of his ministry in supporting other Christian apologists. Some years ago, RZIM sponsored supported me for a a highly successful apologetic tour in Asia. I could never have pulled it off without their support.

I cannot count the number of my students who learned of apologetics and got passionate about apologetics through the speaking and writing ministry of Ravi Zacharias. Few Christian statesmen grace the platform with better logical skills, more passion, greater eloquence, or deeper conviction than this soldier for Christ. He is truly one of our leading public intellectuals. Even more, he started and leads a profound and powerful apologetics ministry with a worldwide impact. Thank you, Dr. Zacharias, and Godspeed.

Ravi, thank you so much for your example, heart, and leadership over the years, especially insofar as speaking words of truth into political, social, and biblical culture. Your publishing and speaking in world religions is much-needed, as well, especially when comparatively so few apologists work in that area. You’re the man to do it, too! Hope you’re feeling at least a little better from the chemo. Everyone is praying for you, so be encouraged in the Lord!!

And finally, from a fellow modern pioneer with him in advancing Christian apologetics:

Ravi, so many out here so love you and are so thankful for your life, ministry and the enormous impact you have had in many lives. I always tell people, “There are two people I would not want to debate: 1) Ravi Zacharias and 2) Norm Geisler.” Wish I could give you a big hug. Millions love and serve our master because of you.