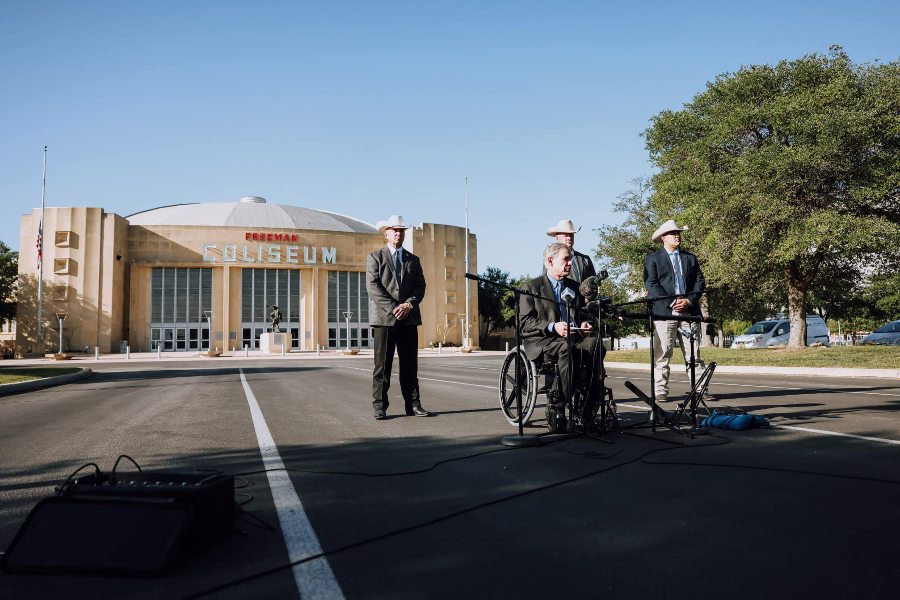 Texas Gov. Greg Abbott at the Freeman Center in San Antonio, April 7, 2021, demanding an investigation into allegations children are being sexually abused at the migrant child facility set up by the Biden Administration.

Thousands of unaccompanied migrant minors are being held at the federally managed Freeman Expo Center in San Antonio, Texas, according to Abbott. Allegations of conditions in the facility include sexual assault, not enough staff to supervise the number of children and lack of food available to the detainees, Abbott said.

“The Biden administration opened the borders and failed to plan for the influx of unaccompanied children crossing the border, and now we are faced with our worst fears—allegations of child abuse and neglect,” Abbott said in a statement.

Biden opened the borders & failed to plan for the influx of unaccompanied minors.

Now he must respond to allegations of child abuse & neglect on his watch.

The administration must close the facility & protect these children. pic.twitter.com/s1chzDQYlx

The reported conditions at the facility are a direct result of President Joe Biden not closing the border or planning for the outcome of perceived open borders, Abbott said in the statement. Abbott called for the facility to be closed and said the migrants should be taken to federal facilities in other states where the government is prepared to ensure their safety.

Children at the facility who tested positive for COVID-19 are allegedly not separated from the rest of the population, according to Abbott.

“I am calling on the Biden administration to close this facility, and I am directing the DPS and the Texas Rangers to immediately begin investigating these allegations. President Biden’s disastrous decisions caused this crisis, and his administration must act now to protect these children, secure the border, and end this crisis,” Abbott said in the statement.

Customs and Border Protection officials encountered over 172,000 migrants including nearly 19,000 unaccompanied minors and more than 99,000 single adults in March, according to the agency.

The Texas Department of Public Safety and the Texas Rangers are conducting the investigation, according to Abbott.