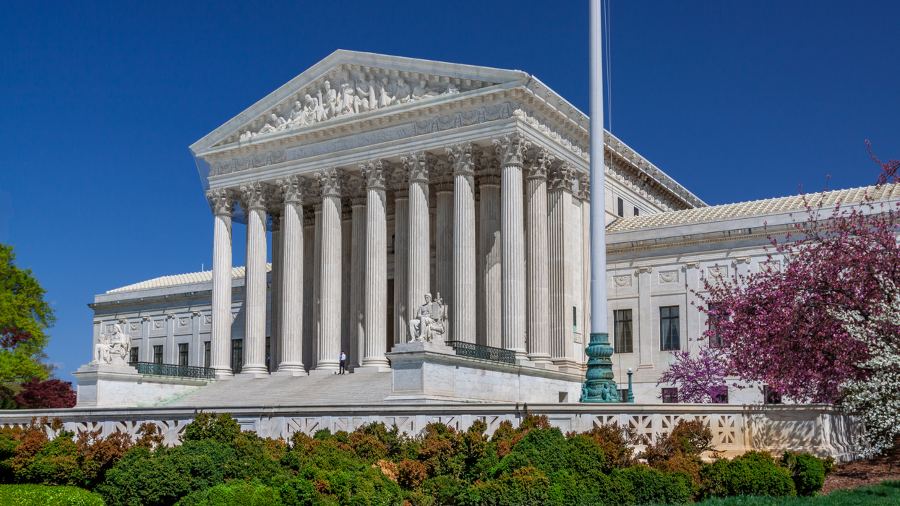 The Texas Heartbeat Act, known as SB 8, is once again up for consideration before the Supreme Court as a result of two consolidated cases.

Whole Woman’s Health v. Jackson and United States v. Texas — scheduled for oral arguments on Monday — will require the court to consider whether the federal government can sue to enforce the right of Texas women to get an abortion and, if so, whether the Texas Heartbeat Act can be enforced at all.

SB 8 — a Texas law banning abortions after a fetal heartbeat is detected, usually around six weeks’ gestation — has remained in effect since Sept. 1.

This is the second time the court has considered the Texas Heartbeat Act’s unique procedural positioning and is being asked to halt its enforcement while the case is litigated in the lower courts. The court declined to halt the law while the appeal is underway.

Both cases have been scheduled for oral arguments much faster than usual. A week ago, the court granted “certiorari before judgment,” placing the cases on what’s known as the Supreme Court’s rocket docket. This is an emergency review procedure that allows a party to leapfrog over the appeals court — in this case, the 5th U.S. Circuit Court of Appeals — without waiting for its outcome and go directly to the Supreme Court.

The two cases came to the Supreme Court at different times and originated in different ways due to the unique procedural questions presented. The court has joined the two and set them both for oral arguments on Nov. 1.

SB 8’s unique enforcement mechanism provides the basis for both legal challenges. It has proven to be a barrier to those interested in maintaining the availability of abortion in the Lone Star State.

According to SB 8, state officials may not enforce the law and are granted sovereign immunity against anyone seeking to bring suit on the grounds that the bill is contrary to constitutional law.

Instead, the Texas Heartbeat Act allows private citizens to bring their own enforcement actions for violation of the law against those performing the outlawed abortions and anyone knowingly aiding and abetting them. This enforcement technique is generally reserved for state and federal fraud claims.

Therefore, the only way for an abortion provider to claim a defense against application of the law is to wait for a private actor to sue, and then raise the argument that the law itself is unconstitutional.

But for studious court-watchers and those following developments on abortion, Americans will recognize that this isn’t the first time SB 8 has appeared before the justices — even this year.

November: The Texas Heartbeat Act Is Back at the Supreme Court

Since the 1973 Roe v. Wade decision, when the Supreme Court made abortion a constitutional right, states have enacted more than 1,300 life-affirming laws, with more than 500 of them implemented in the last decade. The Supreme Court established a generalized right to privacy broad enough to include a right to abortion in its landmark 1973 decision.

Then, in 1992, the court in Planned Parenthood v. Casey affirmed that a state can’t impose an “undue burden” on a woman’s right to an abortion and may only restrict her right to abortion after a fetus becomes viable outside the womb, which is at approximately 24 weeks’ gestation.

SB 8 opposes the court’s jurisprudence on abortion and the framework set forth in Roe v. Wade and Planned Parenthood v. Casey. Therefore, on its face it’s unconstitutional under current Supreme Court precedent.

But the civil enforcement mechanism — criticized by abortion advocates as “vigilantism” — has allowed the law to remain in effect so far by shielding state officials, those normally tasked with enforcing the law from liability by way of sovereign immunity.

Unlike past state iterations of so-called heartbeat bills, the Texas law’s unique structure has flummoxed opponents and resulted in two trips to the Supreme Court and its continued operation at the state level during litigation.

The Texas law is rooted in both principle and science. Life is our most basic freedom. Science shows us that human life begins at conception and a baby’s heartbeat can be detected at roughly six weeks.

Since the Texas Heartbeat Act went into effect on Sept. 1, most abortion activity in Texas has come to a halt and an estimated 150 unborn children per day have been saved from abortion.

The efforts of Texans have also demonstrated how civil society rallies to support women experiencing challenging or unplanned pregnancies. In one single year, according to the most recent data available, Texas pregnancy resource centers provided $33 million in “services, materials, and support at virtually no cost to Texas women and families.”

That work continues in communities across the state every day. Nationwide, such centers served nearly 2 million people and provided $266 million worth of services and assistance in 2019.

Most Americans support significant restrictions on abortion. Yet, America is only one of seven countries in the world that permits elective late-term abortions after 20 weeks — five months — of gestation.

America is an outlier when it comes to earlier restrictions, too. A recent study found that “47 out of 50 European nations limit elective abortion prior to 15 weeks.”

These statistics are reminders of the Supreme Court’s arbitrary and unworkable abortion jurisprudence, which has been a barrier to states seeking to enact life-affirming policies that protect unborn children before viability and reflect advances in technology and science on fetal development.

While the Supreme Court will not address the constitutionality of the Texas prohibition on abortions before viability per se, the issue will likely come up during the argument itself. Rather, the primary focus will be on strictly procedural questions.

For its part, Texas is arguing that “neither the federal government nor abortion providers are entitled to demand Texas write its laws to permit them to be challenged” before they are even enforced. In the alternative, and if the court decides to address the underlying constitutionality of the six-week ban on abortion after all, Texas also argues that the court should overrule Roe v. Wade and Planned Parenthood v. Casey.

It’s highly unlikely the court will get to such substantive constitutional questions in the Texas cases. But on Dec. 1, the justices will hear oral arguments in a case that will explicitly reexamine Roe v. Wade and Planned Parenthood v. Casey’s arbitrary “viability” framework and address head on whether the court should even be mired in the minutiae of state abortion restrictions in the first place.

In Dobbs v. Jackson Women’s Health Organization, the court will consider the constitutionality of a Mississippi law that prohibits abortions after 15 weeks’ gestation with limited exceptions for medical emergencies or severe fetal abnormalities.

At that time, the court will be asked to consider whether all pre-viability restrictions on abortions are unconstitutional (that is, prohibitions on abortion before the child can survive outside the womb).

In the meantime, the Texas Heartbeat Act is saving hundreds of lives every day.

Ultimately, the Supreme Court’s abortion jurisprudence has distorted the Constitution, failed to settle the abortion debate in our country, and poisoned our laws, courts, and culture.

The court’s arbitrary and unworkable standards do not account for advances in science, shifts toward pro-life public sentiments, and the status and financial independence of women — both of which have increased significantly since the court’s determination to legalize abortion in Roe v. Wade.

The Texas Heartbeat Act isn’t the first time pro-life policymakers have gotten creative to challenge the status quo, and it likely won’t be the last.

Regardless of the outcome of Whole Woman’s Health v. Jackson and United States v. Texas, Dobbs v. Jackson Whole Women’s Health will provide the court with a prime opportunity to make a course correction on abortion jurisprudence rooted in a proper understanding of the Constitution.

Should the Supreme Court change course and reverse its prior holdings in Roe v. Wade and Planned Parenthood v. Casey, all abortion policymaking would return to the states.

There, through legislation, debate, and representative government, states would have the power to further address outdated and extreme abortion laws without being subject to an arbitrary and unworkable viability standard.

Policymakers could then craft laws that acknowledge the humanity of children in the womb and reflect public sentiment that supports protecting unborn children before and after viability.

In her scathing dissent to the court’s refusal to stay SB 8’s operation during the pendency of United States v. Texas, Justice Sonya Sotomayor argued that the court should have put a temporary hold on the law so that women might continue to receive abortions.

She argued, “There is no dispute that under this Court’s precedents, women have a constitution right to seek abortion care prior to viability…[But] SB 8 was created to frustrate that right by raising seemingly novel procedural issues [and] it has had precisely the intended effect.”

For the drafters of SB 8, and pro-life advocates in Texas and beyond, they might consider Sotomayor’s statement proof of a job well done.