Why the Terrorists Are Winning the Intelligence War 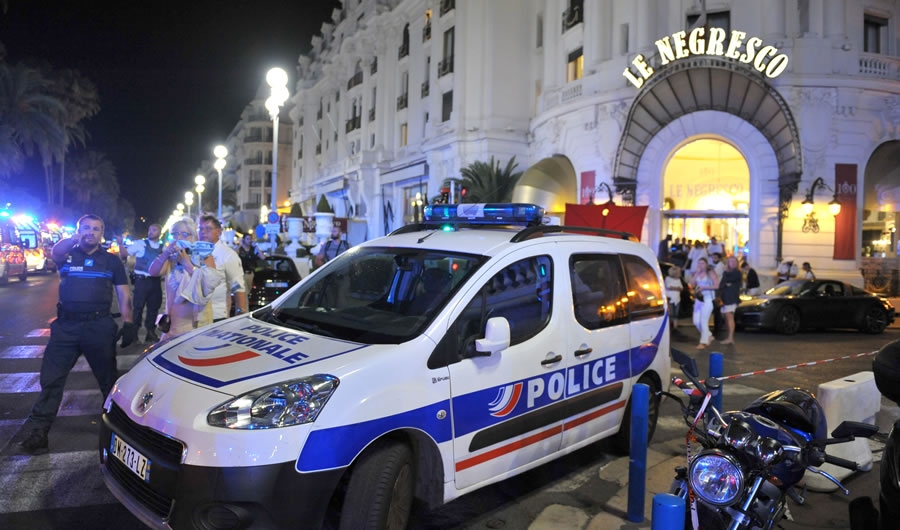 A police car is parked near the scene of an attack after a truck drove on to the sidewalk and plowed through a crowd of revelers who'd gathered to watch the fireworks in the French resort city of Nice, southern France, Friday, July 15, 2016.

Yet another criminal known to security services has perpetrated a mass killing, the Tunisian Mohamed Lahouaiej-Bouhlel. Why did the French police allow a foreign national with a criminal record of violence to reside in France? Apart from utter incompetence, the explanation is that he was a snitch for the French authorities. Blackmailing Muslim criminals to inform on prospective terrorists is the principal activity of European counter-terrorism agencies, as I noted in 2015. Every Muslim in Europe knows this.

The terrorists, though, have succeeded in turning the police agents sent to spy on them and forcing them to commit suicide attacks to expiate their sins. This has become depressingly familiar; as Ryan Gallagher reported recently, perpetrators already known to the authorities committed ten of the highest-profile attacks between 2013 and 2015.

The terrorists, in other words, are adding insult to injury. By deploying police snitches as suicide attackers, terrorists assert their moral superiority and power over western governments. The message may be lost on the western public, whose security agencies and media do their best to obscure it, but it is well understood among the core constituencies of the terrorist groups: the superiority of Islam turns around the depraved criminals whom the western police send to spy on us, and persuades them to become martyrs for the cause of Islam.

These attacks, in other words, are designed to impress the Muslim public as much as they are intended to horrify the western public. In so many words, the terrorists tell Muslims that western police agencies cannot protect them. If they cooperate with the police they will be found out and punished. The West fears the power of Islam: it evinces such fear by praising Islam as a religion of peace, by squelching dissent in the name of fighting supposed Islamophobia, and by offering concessions and apologies to Muslims. Ordinary Muslims live in fear of the terror networks, which have infiltrated their communities and proven their ability to turn the efforts of western security services against them. They are less likely to inform on prospective terrorists and more likely to aid them by inaction.

The terrorists, in short, are winning the intelligence war, because they have shaped the environment in which intelligence is gathered and traded. But that is how intelligence wars always proceed: spies switch sides and tell their stories because they want to be with the winner. ISIS and al-Qaeda look like winners in the eyes of western Muslim populations after humiliating the security services of the West.

As a result, western European Muslims fear the terrorists more than they fear the police. The West will remain vulnerable to mass terror attacks until the balance of fear shifts in the other direction.

As the Prussian army drove into France during the 1870 war with France, Germany’s Chancellor Otto von Bismarck sought the advice of the American military observer, none other than Phil Sheridan, whose cavalry had burned out the farmers of the Shenandoah Valley in the last stages of the conflict. What should Bismarck do about French snipers and saboteurs from villages along the Prussian route of march? Sheridan told Bismarck to burn the villages, leaving the people “with nothing left but their eyes to weep with after the war.” That, and hang the snipers, Sheridan threw in.

Like Gen. William Tecumseh Sherman, who burned a great swath through Georgia and the Carolinas, Sheridan believed that war is won not just by killing soldiers but by denying them support from a broader civilian population. There’s nothing particularly clever about this insight. One learns from James Lee McDonough’s new biography of Sherman how ordinary the great man was — a competent military officer without a minute’s combat experience before the war began, then an honest but unsuccessful banker. When the war came Sherman almost had a nervous breakdown, trying in vain to convince his masters that they would have to kill 300,000 Southern soldiers and devastate the Confederacy to win the war. He then distinguished himself in combat at Shiloh in 1863 and went on to become the scourge of the Deep South.

The Union always had more men and more resources; what it lacked was generals with the stomach for the job. That meant not only the grisly war of attrition waged by Grant, another middling commander with absolute resolve, but also retaliation against civilians: When snipers fired on Union soldiers from Tennessee or Kentucky villages, Sherman expelled residents, burned houses and laid waste to crops. There are lessons here for what we used to call, quaintly, the Global War on Terror.

Destroying ISIS, al-Qaeda and other Muslim terror groups is not particularly difficult, far less difficult than Sherman or Sheridan’s task during the Civil War. It simply requires doing some disgusting things. Western intelligence doesn’t have to infiltrate terror groups, tap phones, mine social media postings and so forth (although these doubtless are worth doing). Muslim communities in the West will inform on the terrorists. They will tell police when someone has packed up and gone to Syria, and when he has returned. They will tell police who is talking about killing westerners, who has a suspicious amount of cash, who is listening to broadcasts from Salafist preachers.

Most Muslims are peaceful people who disapprove of terrorism, but many are not. Opinion polls show a large and consistent minority of 20% to 40% approves of at least some form of terrorism. Support for ISIS generally is low, but much higher for Hezbollah, Hamas and other terrorist groups. By any reasonable count there are a few hundred million Muslims who in some way approve of terror, although very few of them would take part in terror attacks. But they are the sea in which the sharks can swim unobserved. They may not build bombs, but they will turn a blind eye to terrorists in their midst, especially if those terrorists are relations. They also fear retaliation from the terrorists if they inform.

The way to win the war is to frighten the larger community of Muslims who passively support terror by action or inaction — frighten them so badly that they will inform on family members. Frightening the larger Muslim population in the West does not require a great deal of effort: a few thousand deportations would do. Western intelligence services do not even have to deport the right people; the wrong people know who they are, and so do many of their neighbors. The ensuing conversation is an easy one to have. “I understand that your nephew is due for deportation, Hussein, and I believe you when you tell me that he has done nothing wrong. I might be able to help you. But you have to help me. Give me something I can use — and don’t waste my time by making things up, or I swear that I’ll deport you, too. If you don’t have any information, then find out who does.”

This approach to quashing insurgency has worked numerous times in the past. It is not characteristic of peacetime life in western democracies, to be sure, but neither was Phil Sheridan’s ride through the Shenandoah. We prefer to think about winning hearts and minds. Winning the hearts and minds of a people, though, isn’t difficult once they fear you.