Will we accept terrorism as "the new normal," as some have suggested, or will we see this as the war that it is and respond as we have to attacks in the past? 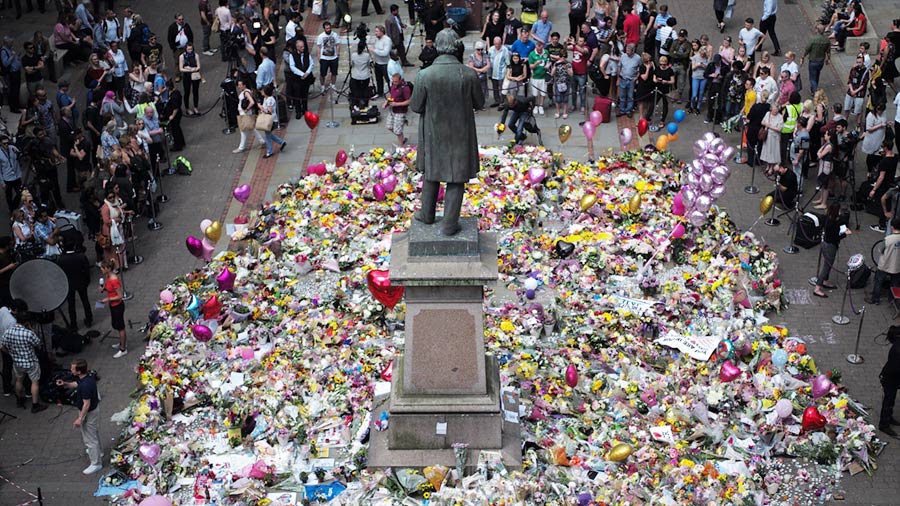 The terrorism scenario is always the same. Events repeat themselves, like in the film Groundhog Day.

First the video of screaming innocents, as in Manchester, England, where an Islamist detonated a suicide bomb at an Ariana Grande concert, killing at least 22 people, many of them children, and wounding dozens of others.

Then, politicians condemn the attack and pledge “solidarity,” thoughts and prayers. These are followed by an increased police presence — or in Manchester’s case heavily armed troops in the streets — as if after-the-fact toughness can rewind the tape. Following that come the flowers, candlelight vigils and songs and signs about love triumphing over hate, a sentiment clearly not shared by the enemies of modernity.

None of this twaddle happened after the Japanese attacked Pearl Harbor. The reaction to that horrific event, as well as the September 11, 2011 terrorist attacks, was quite different.

Various media reports in the UK say the Manchester suicide bomber was known to security services. Salman Abedi, 22, had visited Libya and likely developed connections with al-Qaida and Islamic State in the country from which his parents had emigrated. Abedi was born in Manchester.

A school friend told The London Times that Abedi visited Libya as recently as three weeks ago. Other classmates also contacted security services about Abedi. Even his own mother, according to the Daily Mail, “told authorities that her son had been radicalized.”

Most disturbing was a comment by the imam at the local Didsbury mosque, a place of worship, which, according to the Daily Telegraph, has been accused of fundraising for jihadists. The Telegraph quotes the imam, Mohammed Saeed El-Saeiti, as saying Abedi was a dangerous extremist and that he had shown him “the face of hate” following a talk the imam gave on the dangers of ISIS. He said Abedi’s act was “not a surprise to me.”

Why, then, didn’t the imam contact authorities? Outside the Manchester arena, Abedi was heard by witnesses chanting loudly the first kalma, or Islamic prayer, “There is only one God and the prophet Mohammed is his messenger.” Why didn’t a witnesses call 999, the UK equivalent of America’s 911 emergency number?

The New York Times reports authorities are still “trying to find the ‘factory’ where the bomb was produced and to discern whether Mr. Abedi had received help assembling the device.” Four men believed to be connected to Abedi have been arrested. “What role those men might have played in the attack is not yet clear.”

One of Abedi’s neighbors said a “huge flag,” possibly Libyan or Iraqi, hung from the house, but “We thought it was about football or a protest at home or something.”

How many more signs did authorities need before conducting a pre-emptive strike on Abedi?

Reaction to the incident and information about Abedi was swift. Many posting comments on the Telegraph‘s website called for the Didsbury mosque to be investigated and the imam to be prosecuted for not declaring his suspicions. Others called for “observers” to be placed inside mosques to monitor them for extremist rhetoric before anyone is radicalized to carry out acts of mass murder.

To those who scream about “rights,” what about the rights of those now dead and wounded young people and children to live a normal and productive life? How do you explain the “rights” of terrorists to grieving parents?

This is the choice for Britain, continental Europe and the U.S. Will we accept terrorism as “the new normal,” as some have suggested, or will we see this as the war that it is and respond as we have to attacks in the past? Clearly the current Groundhog Day scenario isn’t working.