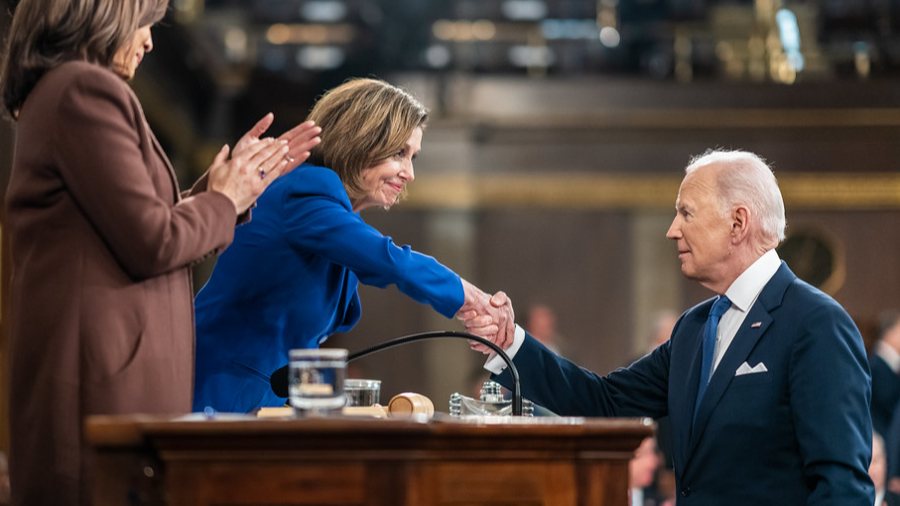 This was written late last night, before Speaker Pelosi’s arrival in Taiwan.

Yesterday, I asked the question, “Why is Nancy Pelosi going to Taiwan right now?” It seemed no one else was asking this, but last night on his FOX News show, Tucker Carlson brought it up. There still are no answers, just questions.

At the time of his broadcast, government officials in Taipei had been advised that Pelosi’s arrival was “imminent.” One source told the Wall Street Journal that “she’s definitely coming.” The only thing yet to be determined was whether she’d spend the night there. This is happening despite the Chinese signaling that if she goes there, it could trigger “serious consequences.”

“If House Speaker Pelosi insists on visiting Taiwan, China will take resolute and strong measures to defend its sovereignty and territorial integrity,” a State media spokesperson said. If U.S. fighter jets escort Pelosi’s plane into Taiwan, they consider it an invasion and will “forcibly dispel” her plane and the military escort, by firing warning shots and making “tactical movement of obstruction.” If these moves are ineffective, the next step is to “shoot them down.”

The White House wouldn’t address this in Monday’s press briefing, choosing not to respond to a “hypothetical.” Note: the threat itself is not a hypothetical. It has been made, repeatedly.

Will we ever know the extent of the Biden family’s corruption? And if so, will it be long after the damage has been done?

“This is one of the weirdest moments in the weirdest presidency in American history,” Tucker said. (I can’t speak to all of American history, but it certainly is in my memory.) “The Biden administration is provoking a hot war with China,” he continued, “which, by itself, would seem to be headline news.”

Even if all this Chinese swagger is just a bluff, why did we put ourselves in this position? Pelosi must go to Taiwan now, as the Chinese are surely testing us. They need to know: they don’t get to say where Americans can go and where we can’t. We need to tell them where to go, and I think you know where I mean.

But as I observed yesterday, Biden’s administration isn’t exactly known for a firm stand with China. Just the opposite, and it just might be because his family has taken millions of dollars from the Chinese government. Biden has been complicit in China’s effort to hide the origins of COVID. He’s also shut down the China Initiative, intended to discourage Chinese spying. He’s dropped tariffs on Chinese goods. He’s even selling a portion of our Strategic Petroleum Reserves to China and, as Tucker put it, “handing our entire energy grid over to the government of China.”

The controversy surrounding Pelosi’s trip seemingly gave the Pentagon the opportunity, through spokesman John Kirby on Monday, to utter this sentence: “We do not support Taiwan independence.” Perhaps this administration is using Pelosi’s trip as an excuse to offer yet another gift to the CCP: to say out loud the exact words they demand we say.

It’s a balancing act, but officially, America doesn’t support Taiwanese independence. We acknowledge, without endorsing, the “One China policy” that says Taiwan is part of China.

Yesterday, we said the stance taken by our otherwise pro-China administration — provoking them with this unnecessary trip — made no sense, and Tucker concurs. “This does not make any sense at all,” he said. “In fact, it only makes sense if the Biden White House is intentionally trying to weaken and destroy the United States.”

This Makes No Sense

I’d say just about everything this administration has done makes sense only in that light.

Tucker likened this situation to what happened with Ukraine earlier in the year. Biden sent…(drum roll)…Kamala Harris…to deal with the complexities of peace negotiations there, so we ended up with (what else?) war between Russia and Ukraine.

Fast-forward to this moment. Does anyone really expect that Nancy Pelosi’s presence in Taiwan, if she does go, will be helpful in promoting peace? I imagine Taiwanese leaders quietly signaling, “Um, Madame Speaker, why don’t we take a raincheck on that visit?”

Tucker went on to note that China, if we were at war, “could simply turn off our economy.” Their navy is larger than ours, and if they control shipping lanes, they could shut down Taiwan’s huge semiconductor industry. We depend on China for much more: car batteries, computers, phones, refrigerators, food preparation equipment, shipping containers, the cranes you see at loading docks, and most medications — including more than 90 percent of antibiotics.

We know for sure that the Bidens, including “the Big Guy” (our President), are incredibly compromised. Last week, Wisconsin Sen. Ron Johnson said he expected Biden’s Department of “Justice” to keep any indictment of Hunter (if there even is one) sealed. They’ll “do a deal,” he said, and “the American people will never get the full truth.”

I have a feeling that if Hunter Biden eludes indictment after all he’s done to put our national security at risk, or if he gets a slap on the wrist and his charges are sealed, the level of response from the American public will shock Washington DC. I think they underestimate how much we have grown to detest what we’ve learned about the “ruling elite.”

Consistent with this, The Epoch Times reports in a premium story that a watchdog group called Protect the Public Trust is suing the DOJ for withholding records on high-profile investigations, including the Hunter Biden case. Over a year ago, they filed a Freedom of Information Act (FOIA) request for documents relating to ethics waivers and “determinations to allow potentially conflicted employees to work on cases.”

These would deal with potential conflicts of interest such as the one involving Biden appointee Nicholas McQuaid, whose former colleague represents (yes) Hunter Biden.

The Epoch Times ends its story with an unintentionally hilarious quote from AG Merrick Garland: “Transparency in government operations is a priority of this Administration and this Department. We stand ready to work with each of you to make real the Freedom of Information Act’s promise of a government that is open and accountable to the American people.”

Is Joe Biden a Chinese Agent?

Will we ever know the extent of the Biden family’s corruption? And if so, will it be long after the damage has been done? John Hinderaker, in this must-read piece posted at POWERLINE, wonders:

Is the Biden administration deliberately trying to sell us out? Is Joe Biden a paid agent of the Communist Chinese, or perhaps of the Putin regime? I have always assumed the answer is no, but the troubling question is, if Biden were a Chinese agent, what exactly would he be doing differently? The answer: nothing.

Hinderaker is focusing mostly on Biden’s “climate” initiatives that will destroy our economy and energy grid and enrich China by trillions of dollars. But Biden is helping China and risking our national security on multiple fronts. So, tell me again: Why is Nancy Pelosi going to Taiwan?