And other dispatches from the frontlines of the Sexual Revolution 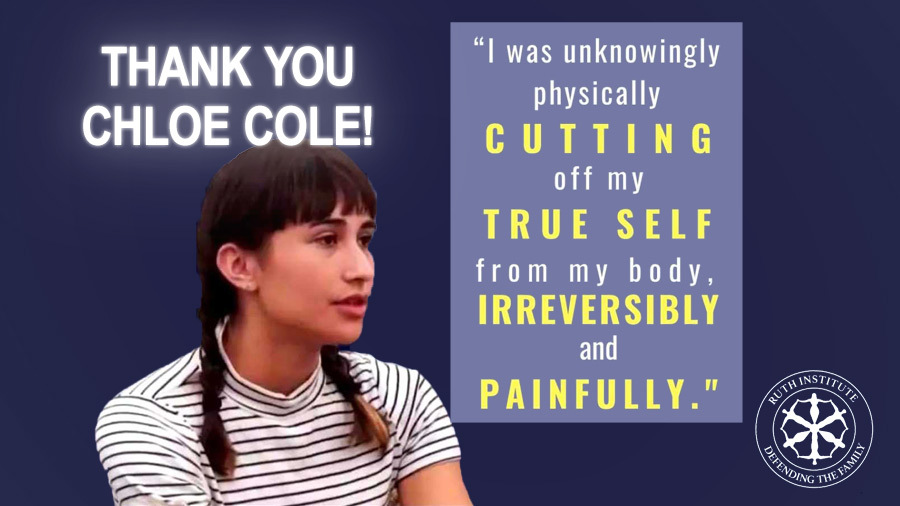 “Increasingly, detransitioners are coming forward to tell their stories and warn of the physical and psychological dangers of so-called gender transitioning,” said Dr. Jennifer Roback Morse, Ph.D., president of the Ruth Institute.

Chloe Cole, a California teen who formerly identified as “transgender,” recently testified at a Florida hearing on a rule that would allow the state to restrict Medicaid funding for drugs and procedures that interfere with the natural functioning of the body.

Now 17, Cole, who decided she was “transgender” at 12 and underwent a double mastectomy at 15, told the hearing, “I was unknowingly physically cutting off my true self from my body, irreversibly and painfully.”

“I don’t know if I’ll be able to fully carry a child, and I might be at increased risk for certain cancers, mainly cervical cancer,” Cole testified. “And because I do not have breasts… I’m not able to breastfeed whatever future children I have.”

Morse commented: “This courageous young woman is helping to expose the dangers of these radical procedures. The law and common sense considers a 15-year-old too young to consume alcohol. Neither the law nor any decent person should consider her old enough to choose to have her breasts cut off.”

“An extremist movement is promoting these unnatural interventions. A segment of the medical/pharmaceutical industry benefits from having lifelong customers who need constant chemical intervention to maintain the fiction that they have changed the sex of their bodies,” Morse charged.

“Transgenderism is a dangerous lie. Whatever sex you were born, you will be for the rest of your life. No amount of hormone therapy or surgical intervention will alter that reality.”

“Allied with individuals like Walt Heyer, a man who identified as a transgender woman for eight years, the Ruth Institute is working to expose one of the most dangerous movements in our society,” Morse said.

“Our Transgender Resource Center tells the stories of people like Miss Cole, and provides research to refute the seductive lies about gender,” Morse noted.

“I can only echo the words of Chloe Cole, who urges: ‘Do not transition your kids… If you are considering transitioning, please wait until you are a fully developed adult. Transitioning can damage your body and mind in ways that we may not fully understand.’”

The latest Dr. J Show features Christa Brown, Director of Medical Impact at Heartbeat International, the largest organization of pregnancy help centers in the world, with locations in 70 countries.

“I’ve helped thousands of women over the course of 20 years, and I never had one come in and say, ‘I would like to end the life of this child,’ or, ‘I’m so excited about my abortion,’” Brown says.

“One of the first questions I ask is, ‘What is it that you want to do?’ It would always stun me that there would be a moment of silence because no one had asked her that. This is ‘her body’. This is ‘her choice’, but no one had bothered to ask her.”

Then Brown says: “What are the problems that keep you up at night? Let’s see if we can solve those.” Many women don’t realize that pregnancy centers can help them for years beyond the birth of their child, dispelling the myth that pro-lifers only care about the unborn.

Another major resource of Heartbeat International is a hotline for abortion pill reversal. Often women say they feel a darkness come over them and they feel suicidal after taking the first abortion pill of a two-pill process. They call Planned Parenthood with regrets but are told there’s no such thing as reversal, that they need to finish what they’ve started.

However, abortion pill reversal has a 68% success rate. More than 3,000 babies have been saved this way.

The rhetoric of the abortion pill is that it’s “safer than Tylenol,” and they can “have an abortion in the comfort of their own home,” but the reality is, there’s a lot of bleeding and pain.

What also isn’t well known is that abortion pills are actually medication for ulcers and other medical conditions, and aren’t FDA approved for abortion.

Frighteningly, there are more than 70 websites where women can buy these drugs without seeing a doctor to confirm they’re pregnant and that they’re not having an ectopic (tubal) pregnancy. Abortion pills will not stop the growth of babies outside the uterus, which means if the mother doesn’t seek medical treatment, she will likely die.

“It’s a lie of media and Big Abortion to say that women need abortion to succeed because that is absolutely not true.” Brown sees women finishing high school or college and beginning their career path, even with their baby. “We can succeed.”

“Women almost all say, ‘My baby was always wanted. There was never a doubt.’ … They just felt the pressure [to abort]. Once they realized there was hope, we were able to help them.”

Watch to learn more, including how you can get involved with pregnancy centers near you.

The Utopian Dream of the Sexual Revolution

Morse is a guest on Fr. Rob Jack’s radio show, “Driving Home the Faith,” where they discuss why we must fight for Christian sexual ethics in order to secure the rights of children.

They also talk about the explosion of violence against Catholic churches and Chicago’s mayor pledging $500,000 of city funds for the promotion and safeguarding of abortion.

Morse posits that sexual revolutionaries have always sought taxpayer-funded abortion and points out the irony of ‘reproductive health’ being about not reproducing.

Listen to it all here!