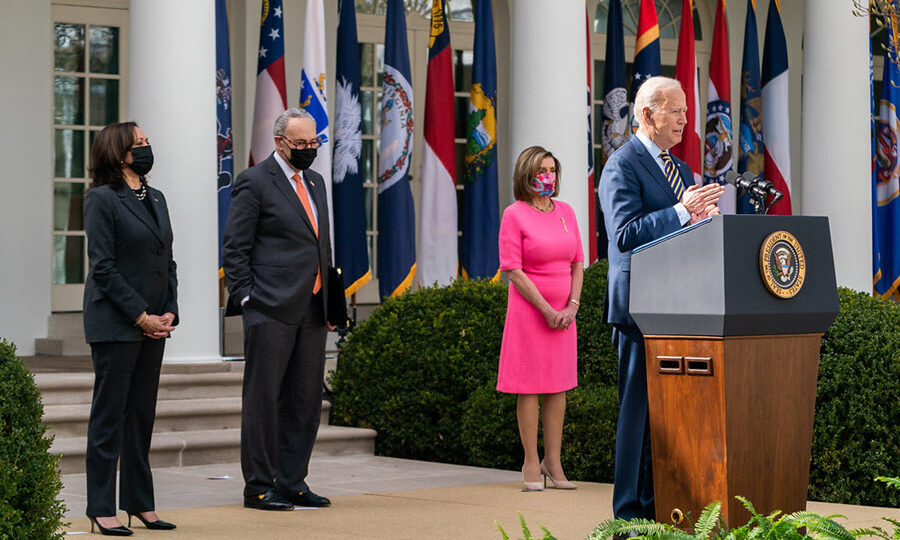 My major takeaway from President Biden’s joint address to Congress is that he and his handlers are continuing to employ the Democrats’ primary strategy from the Obama years: Never let a crisis go to waste.

To scare the American people into accepting his reckless spending proposals, Biden is leveraging the pandemic, which means he is framing it as still hot, raging and dangerous, while immodestly taking undeserved credit for the progress that we’ve made.

To begin, he staged an image of crisis for television viewers by having a group of entirely vaccinated people unnecessarily wear masks and socially distance, though Massachusetts Institute of Technology researchers recently suggested that the six-foot rule offers no protection in indoor settings, whether or not people are vaccinated. This charade is destructive to the American psyche, which desperately needs positive images and an end to the climate of fear the White House continues to perpetuate.

Limiting the audience size also allowed Biden the luxury of hand-picking a more favorable audience for his speech. Everything in this bizarre administration must be carefully orchestrated because the powers behind the scenes can’t afford the titular president to go off script even slightly.

To set the table, Biden said we are in “extraordinary times” and invoked the word “crisis” in his opening remarks. “Tonight, I come to talk about crisis and opportunity,” he said. He immediately tied the “crisis” to his plan for Big Brother to start “rebuilding the nation.”

It’s not American enterprise and ingenuity that will rebuild it, mind you, but government spending pursuant to the Democrats’ command-control economic model. Just like with former President Obama’s “stimulus” package, they’re effectively promising “shovel-ready” jobs galore, many of them catered toward another “crisis” — the “climate crisis.” Never mind how disastrous Obama’s record was on that (Solyndra). We’ll see similar failures should Biden shove this monster spending package, euphemized as an “investment,” through Congress via the reconciliation process.

Biden continually expanded the scope of the crises. “One hundred days ago, America’s house was on fire,” he said, and he “inherited a nation … that was in crisis. “The worst pandemic in a century. The worst economic crisis since the Great Depression.” That last claim, by the way, is manifestly false. As National Review’s Philip Klein tweeted, when Biden took over, the unemployment rate was 6.3% and the economy had just experienced two consecutive quarters of strong growth. In fact, Klein noted, during the Obama-Biden years, the unemployment rate was above 6.3% for the first five years.

Upping the ante, Biden breathlessly reported that 10 million homes and 400,000 schools and child care centers have lead in their pipes, “including in drinking water, a clear and present danger to our children’s health.” But these problems are nothing his proposed beneficent American Jobs Plan can’t solve.

Big Brother to the Rescue

Ratcheting up the projected atmosphere of crisis and laying a further foundation for the public to accept his Big Brothership, he said that the Jan. 6 attack on the Capitol was “the worst attack on our democracy since the Civil War.” Sane Twitter properly refuted this lie, noting that Biden conveniently forgot the Senate bombing of 1983. Mollie Hemingway cited the “deadly Summer of Rage with its attacks on the WH and federal court buildings, four presidential assassinations, another five assassination attempts, Pearl Harbor, and 9/11.”

But, thanks to Biden’s messianic magic, he boasted, “America is on the move again, turning peril into possibility, crisis to opportunity, setback into strength.” Notice how those three word pairings are designed to accentuate the gravity of the alleged crises — “peril,” “crisis,” “setback” — and the indispensability of big Biden government to rescue us — “possibility,” “opportunity” and “strength.” Further milking that theme, he said that the government was able to “rescue” American households through his American Rescue Plan — the government’s distribution of checks (printed money).

Grossly taking personal credit, Biden stressed that “We’re also providing rental assistance,” and patronizingly added, “you all” — his fellow Big Brotherites in Congress — “know this, but the American people — I want to make sure they understand.” Thank you, Generous Joe. He added that his friendly feds kept people from being evicted from their homes, provided loans to small businesses and enrolled 800,000 Americans in the Affordable Care Act because he “established the special sign-up period to do that.”

Incidentally, the federal government’s main accomplishment in turning the corner on COVID-19 — Operation Warp Speed — was initiated by former President Donald Trump and involved a robust partnership with private businesses and industry to produce vaccines. Yet Biden took credit for the vaccines and ungraciously offered no praise to Trump, all while pretending to project a bipartisan spirit.

Biden audaciously claimed that America on his watch is choosing “hope over fear, truth over lies and light over darkness.” Precisely wrong. He is perpetuating fear — keep those masks whether or not you’re vaccinated, or even outside, or even in schools, where there’s minimal risk — and spreading lies so the darkness of these manufactured crises swallows the light and optimistic spirit of the American people. The actual crises we face are mostly created by the Democrats’ war on cops, opening of the borders, pandemic fearmongering, fanning the flames of race, undermining confidence in America’s founding (canceling Trump’s 1776 commission and resurrecting the America-hating 1619 Project) and trying to spend us into irreversible bankruptcy.

Throughout the speech, Biden hammered the message that our crises are multifaceted and existential — and the only remedy is his government and its limitless trillions of rescue dollars.

To paraphrase our ludicrously labeled “unity president,” I realize conservatives “know this,” but let’s hope a significant portion of the other half of America understands the full implications of this madness.