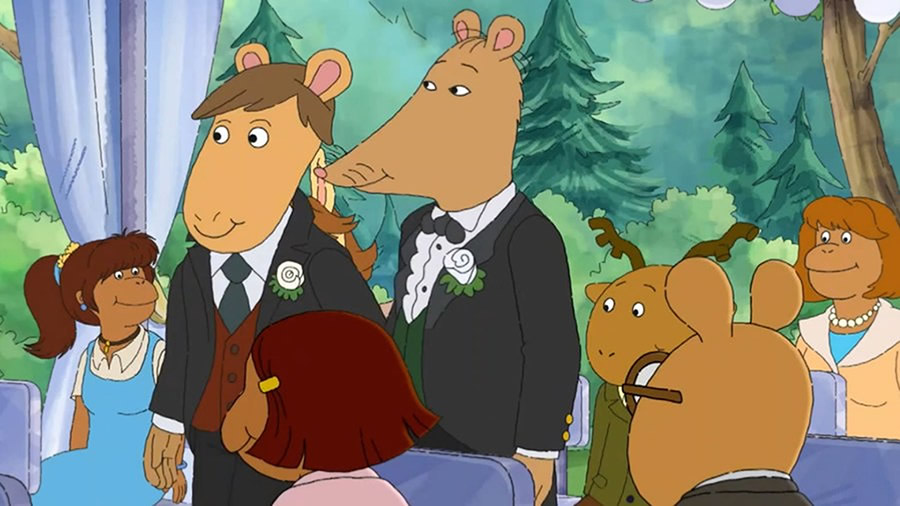 Arthur isn’t just the longest-running cartoon series on television — it’s also the most controversial. That’s all thanks to PBS, who’s spent the last umpteen years using its half-billion taxpayer dollars promoting the agenda of the far left.

Now, apparently, that agenda includes pitching same-sex marriage to kids as young as 4 — and using one of their favorite characters to do it.

The episode, part of Arthur’s 22nd season, is called “Mr. Ratburn and the Special Someone.” Naturally, Mr. Ratburn’s third-grade students (and every child watching) thinks that “special someone” is a female. So imagine their surprise when Mr. Ratburn walks down the aisle on the arm of an aardvark named Patrick. The show cuts to Arthur, who’s still trying to process the idea. Then suddenly, he and his friends break into happy smiles.

One parent who tuned in contrasted the characters’ reaction to her own children’s. “The [cartoon] children are a bit surprised but mostly nonchalant about the whole thing. Needless to say, in the real world, our children were shocked and confused.”

Of course they are. The target audience for the show is pre-school and elementary kids. They barely know the alphabet — let alone L-G-B-T.

For PBS, though, this is all par for its liberal course. Taxpayers have fought for years to stop the government’s broadcasting arm from sexualizing kids on everything from the Muppets to Sesame Street.

When Donald Trump became president, one of the first things his budget proposed was slashing the $445 million for the Corporation for Public Broadcasting.

The left always pleads with Republicans to lay off Bert and Ernie, but what they really mean is: Don’t stop funding the left’s free microphone.

For years, NPR and PBS have taken advantage of the airwaves to spout their radical agenda. And in the end, taxpayers are the ones that have been puppets — for the left. But now that PBS has shown that it can’t be trusted, it’s time for Big Bird’s liberal friends to feather their own nest.

“Remember,” the Family Research Council’s Cathy Ruse says, “Americans didn’t ask for a re-definition of marriage. It was forced on them by activist judges, who overturned tens of millions of votes cast to keep marriage a man-woman institution. But gay activists are not satisfied with just changing the law — people must change their beliefs, too. There can be no dissent. Children are not asking for their cartoon characters to be gay — activists in the entertainment industry are forcing it on them.”

Which is all the more ironic, considering how “impressionable” liberals say kids are when it comes to something like religion. Out in Pennsylvania, secularists were hyperventilating that students had been exposed to the words “God Bless America.”

Thanks to today’s technology, there’s no reason to sit your kids in front of live TV and wait for messages like this to assault them.

They’re too susceptible to messages like that, they said. They might be overly affected by the idea of faith, they argued.

But throw a same-sex wedding in a popular cartoon, or pornographic sex ed material in the classroom, or Drag Queen Story Hour at the local library, and somehow it’s perfectly OK.

That’s the double standard of liberal activism. It’s fine to indoctrinate kids — as long as they’re the ones doing the indoctrinating.

Moms and dads, be warned. “Children’s entertainment is no longer informed by a Judeo-Christian values system, but by left-wing political interest groups,” Ruse cautions. “Now more than ever, parents have to be vigilant about the media their children consume. Parents trust shows made for children, and the creators of the show are taking advantage of their trust.”

Thanks to today’s technology, there’s no reason to sit your kids in front of live TV and wait for messages like this to assault them. If you’ve run out of VeggieTales and are looking for shows you can trust, don’t give PBS a second thought. Try a Christian media provider like JellyTelly.

Students Ordered to Reveal Their Sexuality, Religious Beliefs. A Mother Fights Back