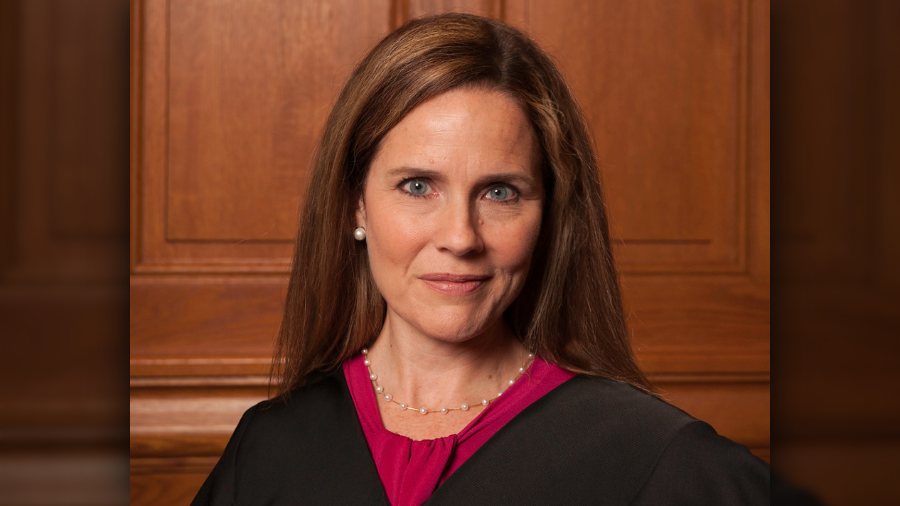 "So long as they're not sectarian, it's a thumbs-up?” Justice Amy Coney Barrett asked during arguments Wednesday before the Supreme Court in Carson v. Makin.

A prohibition on distributing government funds to “sectarian,” or religious, schools is written into the constitutions of 36 states.

Such provisions are known as Blaine Amendments. Last year, the Supreme Court considered and then invalidated the specific prohibition contained in the Montana Constitution.

In Espinoza v. Montana Department of Revenue, the high court ruled that although states aren’t required to subsidize private education, when they do they may not exclude religious schools from receiving funds simply because they are religious.

The court held that the “no aid” provision of the Montana Constitution discriminated against both religious schools and the families with children enrolled in them, in violation of the U.S. Constitution.

However, the Supreme Court left open the question of whether a state could exclude families and schools from funding based on the religious use to which a student’s aid might be put at a school.

“You don’t have to choose between receiving a public benefit and your faith, right?” — Justice Neil Gorsuch

In other words, does it violate the Constitution to prohibit students who participate in educational aid programs from using that aid to attend a religious school?

That question formed the crux of oral arguments Wednesday in Carson v. Makin, a lawsuit brought by Maine parents who were prevented from using available state tuition assistance to send their children to private Christian schools.

The parents couldn’t do so despite the fact that in sparsely populated Maine, over half of the school districts don’t operate their own high schools and instead offer tuition assistance for students to attend public or private schools elsewhere. These schools may be inside or outside Maine, so long as they aren’t religious schools.

As the petitioners point out in their merits brief, when a question arises about whether a school is “nonsectarian” (that is, nonreligious) and therefore a suitable choice for families who get tuition assistance, the Maine Department of Education examines curriculum and activities to determine whether the school “promotes faith or presents its teaching through a faith-based lens.”

The U.S. Court of Appeals for the 1st Circuit had upheld Maine’s exclusionary provision, determining that the elimination of religious schools from educational choice options hinged on whether the money was used for religious instruction, rather than simply because the school itself was religious. (The Supreme Court already had considered and resolved the latter issue in Espinoza, as well as in a 2017 case, Trinity Lutheran Church of Columbia v. Comer).

If this sounds like the appellate court was splitting hairs, it’s because it was.

As Andrew Wimer of the Institute for Justice (one of the law firms representing the Maine parents) argued in an op-ed for Forbes, the “status” versus “use” division is “a distinction without a difference.”

“Parents don’t choose religious schools based on a label, they send their children to those schools because of the values they actively promote,” Wimer wrote.

During the argument presented Wednesday by the Institute for Justice’s Michael Bindas, counsel for the petitioners, the Supreme Court’s conservative justices were almost universally silent.

On the other hand, liberal Justices Sonia Sotomayor, Elena Kagan, and Stephen Breyer were highly animated, peppering Bindas with questions aimed at proving that the religious tenets of both Christian schools at issue were themselves discriminatory.

At one point, Breyer said: “There are — there are beliefs that no gay students, no gay teachers, the man is superior to the woman, and a few other things like that. Is that right?”

Bindas replied that the Maine Human Rights Act permits a religious employer to require that employees adhere to the religion’s tenets, and that he was aware of no provisions of either school that prevented gay students from being enrolled.

[T]here are 65 religions or more in this country and they believe a lot of different things. And what’s worrying me is … if the state must give money to the schools, they’re going to get into all kinds of religious disputes. One state says, no, you — in this kind of a situation, you’ve got to hire the gay teacher. The other says yes, yes. The other says no. … And so there was a reason why this court’s cases have said we do not want to get into a situation where the state is going to pay for the teaching of religion by religious — you know, practicing religious organizations.

But Bindas made a critical distinction that remained a theme throughout his argument: Maine’s tuition program is not a subsidy for religious instruction.

The program does not fund religious schools. Instead, it grants funds to families who simply want to choose a religious school as the best option for Maine’s legal mandate that children be educated, Bindas said. Private, independent, parental choice severs any potential link with government “funding” of religious education.

Therefore, Bindas concluded, there is no violation of the Constitution’s establishment clause prohibiting the government from establishing or supporting a specific religion.

Kagan discussed the “play in the joints” that the Supreme Court had allowed in all its cases involving religion clauses and said states should be allowed to weigh the interests differently. She echoed Breyer’s point that the Christian schools involved in the case were “proudly discriminatory,” and taxpayers surely wouldn’t want to fund schools with discriminatory teachings.

Justice Neil Gorsuch intervened, retorting that “we’re not being called upon today to interpret Maine’s anti-discrimination laws, and we don’t need to do that to decide this case.”

Christopher Taub, chief deputy attorney general for Maine, argued that the state had determined that public education should be religiously neutral, and that the petitioners instead wanted a different benefit than what was provided for in the tuition assistance program — an education with religion attached.

Chief Justice John Roberts then ran a hypothetical: School A is run by religion A and its doctrine instructs students to practice charity and service to neighbors, with no requirement of propagating its faith. This school looks just like a public school, Roberts said, but is “owned by religion.”

By comparison, Roberts said, “Religion B also has a school, but its doctrine requires adherence to educate children in the faith, and the — the school is infused in every subject with their view of the faith.”

Would school A be funded in Maine, while school B would not? Roberts asked.

Taub struggled with a response, at first agreeing to that funding scenario before Roberts added: “We have said that that is the most basic violation of the — the First Amendment religion clauses, for the government to draw distinctions between religions based on their doctrine.”

Roberts also noted how difficult it would be to determine how religious each school is. What about if a school were only 50% sectarian, or had only one chapel service every day, or one class with a religious perspective offered?

Stumped, Taub responded that “these are hypotheticals the Department of Education would have to look at.”

Shortly thereafter, Justice Amy Coney Barrett weighed in on how the Maine Department of Education would make determinations among “sectarian” and “nonsectarian schools.”

“How would they even know?” Barrett asked. “Because it’s my understanding that in choosing whether a nonsectarian school can be funded or not, you’re not engaging in that kind of oversight about what the belief systems are of the school. So long as they’re not sectarian, it’s a thumbs-up?”

When Barrett asked whether there were specific curricular requirements, Taub responded that the Maine Department of Education would “do a little homework,” but that schools were not sending their curriculum to the agency.

So “it’s just kind of what you can find on the website?” Barrett asked.

Presenting the views of the Biden administration, Deputy Solicitor General Malcolm Stewart argued that the state of Maine has a “legitimate anti-establishment interest.”

That comment seemed to raise a few eyebrows among the conservative justices.

Stewart referred back to Kagan’s statement about “play in the joints” when it comes to analyzing religious exercise.

He said that while, for example, state legislatures may begin their sessions with brief prayer, they are not required to do so. And if a state later determines that was the wrong choice, it may discontinue the practice.

Stewart argued that Carson v. Makin was about what the government has to fund, “not a case about the government either imposing affirmative restraints on religion or denying generally applicable benefits to persons based on religious exercise outside the program.”

Gorsuch jumped in, noting that the belief that parents could still send their children for religious instruction after school or on weekends “would be pretty offensive to religious beliefs, right?” He added: “You don’t have to choose between receiving a public benefit and your faith, right?”

Gorsuch noted that Maine’s tuition assistance program seemed to favor religions for which secular private schools are an adequate substitute for religious education over those for which those schools are not.

Stewart admitted that yes, the program burdens some religious parents differently than others, but it wasn’t discrimination based on the religion of the parents.

At this, Kavanaugh retorted:

Well, that’s slicing it pretty thin in the real world, I think. It’s discrimination against the different schools because of the religion and people who prefer those schools, prefer religious schools over secular schools. … I think the lesson of some of the cases is discriminating against all religions versus secular [institutions] is itself a kind of discrimination that the court has said is odious to the Constitution.

A problematic issue, and one addressed in his closing rebuttal, was Bindas’ assertion that the determination of whether a school is sectarian was based upon the decision of a regulator who sits in judgment on whether a school is religious or secular enough for families to use their tuition assistance dollars there.

Such centralized power, and such potential for anti-religious discrimination in the hands of an unelected bureaucrat, should send chills down the spine of all those who seek to exercise their faith as they see fit.

If a state chooses to establish a program that provides tuition assistance to parents living in areas where there are no public schools, parents who wish to practice their faith by sending their children to a religious school should be able to participate in that program. And parents should be able to do so to the same extent as parents who are content to send their children to a secular school.

Exactly Where We Want Them