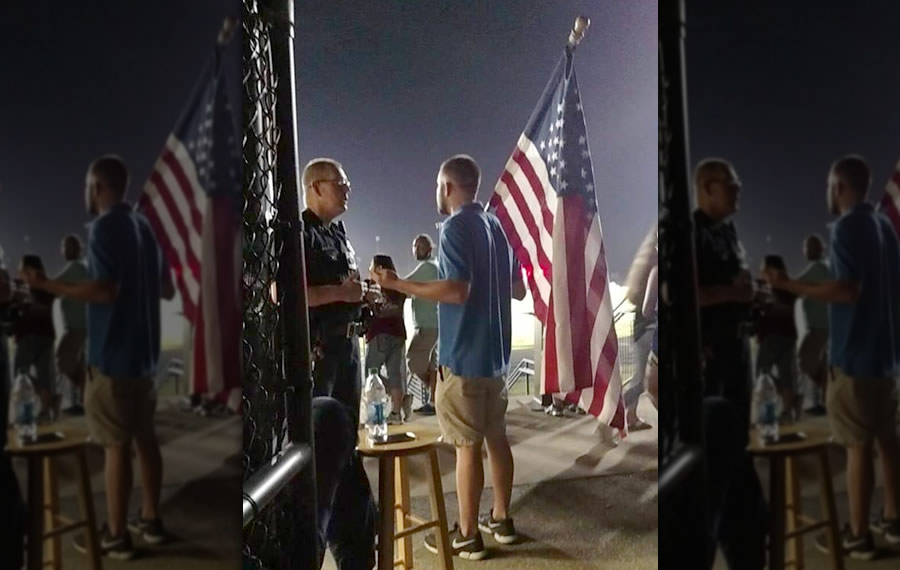 Travelers Rest alumni Hunter Ballew is stopped by security as he attempts to bring an American Flag into the Chico Bolin stadium on Wednesday, August 26, 2016.

Dean “Chico” Bolin was my great uncle. But to the folks around Travelers Rest, South Carolina, Uncle Chico was a legend — on and off the football field.

He was a good man — a Christian man — a no-nonsense disciplinarian. Uncle Chico was also a Marine. He fought in World War II and was severely wounded — shot in the leg at Iwo Jima.

Uncle Chico, who passed away in 2007, lived long enough to see the school name its new football stadium in his honor — a decorated war hero who loved America. So you can understand why our family was disturbed to learn that students and fans were blocked from entering the stadium with American flags.

This item appeared in the Greenville News:

Beth Brotherton, a spokesperson for Greenville County Schools, confirmed to me that several students who wanted to bring American flags were blocked from entering the stadium.

“The principal, in an effort to prevent any potential issue in this rivalry game, decided not to allow students to bring in full-sized American flags,” she told me. “They were turned away at the gate with the flag and told they were welcome to come in but they could not bring their flags with them.”

So here’s the back story: during last year’s game, some students allegedly flew Old Glory and hollered out, “Go home, go home.”

“The principal made a decision in terms of what he thought was best for student safety,” Ms. Brotherton said. “Because of prior incidents, that was not something he felt like was in the best interest of maintaining a good relationship between the two school communities.”

Travelers Rest Police Chief Lance Crowe disagrees with the principal’s decision and fired off a statement letting the locals know that the police department loves America and Old Glory.

“To my knowledge, every TRPD officer, except one, believes that barring the American flag from a football game is not a correct policy,” Chief Crowe wrote.

The school district wanted me to make it very clear there is no official policy banning the American flag. Blocked, barred, whatever.

But if that’s the case — if there is no ban on the flag — will fans be permitted to fly the Star-Spangled Banner on Friday night?

“We’re going to have to make decisions wisely on a case-by-case basis,” she replied.

It’s a mighty sad day in Travelers Rest, South Carolina — where patriotism is determined on a “case-by-case” basis — in a stadium named after a Marine who nearly gave his life defending the Stars & Stripes.

Todd Starnes is host of Fox News & Commentary, heard on hundreds of radio stations. His latest book is God Less America: Real Stories From the Front Lines of the Attack on Traditional Values. Follow Todd on Twitter @ToddStarnes and find him on Facebook.