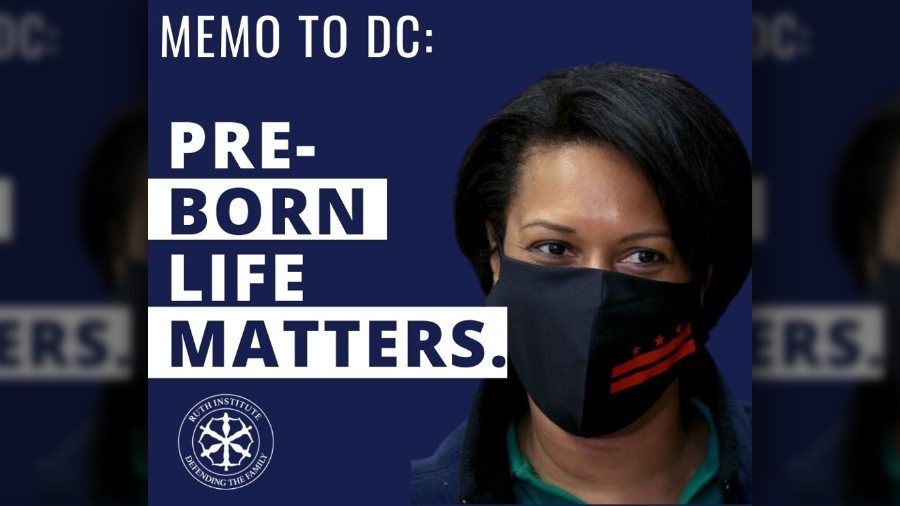 Washington, D.C. mayor Muriel Bowser’s new vaccine mandate has caused the cancellation of at least one event connected to the January 21 National March for Life. Ruth Institute President Dr. Jennifer Roback Morse, Ph.D., said, “We are disgusted by the transparently heavy-handed tactics of the mayor’s office in interfering with the biggest pro-life event in the nation.”

“It’s hard to believe that the timing of the mandate, which goes into effect several days before the March, is a coincidence. Rather, it looks like a deliberate move by a pro-abortion politician to throw a monkey wrench in a week of pro-life events.”

The mandate requires those entering indoor spaces (including hotels, restaurants and conference centers) to provide proof of vaccination or obtain an exemption.

“How could the mayor not know that pro-lifers are among those least likely to be vaccinated, due to concerns that fetal cells were used in the vaccine?” Morse said.

At the same time, Morse praised Students for Life of America for their perseverance in holding their National Pro-life Summit January 22, despite the new restrictions.

“We appreciate that Students for Life have not canceled themselves. Rather, these young people will be there, training to stand for life more effectively, in spite of the obstacles. If these courageous young people can put themselves on the line, the Ruth Institute will stand with them.”

“We call on everyone to attend the March for Life and the Students for Life Summit! If you’re at the Summit, please come visit us at the Ruth Institute booth!”

What Happens When Roe is Overturned?

The latest Dr. J Show guest is Kristan Hawkins, president of Students for Life of America and Students for Life Action, the nation’s largest pro-life youth organization. She grew a small organization of a few dozen student groups scattered around the country to a coordinated national team that serves 1,250+ Students for Life chapters in all fifty states and has trained over 100,000 young people. Their mission is to abolish abortion by transforming our culture through recruiting, training, and mobilizing this pro-life generation, who are the direct targets of today’s abortion industry.

Hawkins also hosts a weekly podcast, “Explicitly Pro-Life,” has been interviewed on many mainstream TV news channels and has spoken at countless universities.

Listen as Hawkins describes what will happen if Roe v. Wade is overturned and the power to decide on abortion is left to each state. In anticipation of that, the abortion industry is now pushing chemical abortions. “This is their end run around Roe,” Hawkins said.

Now a doctor can mail pills to a woman he’s never seen in person, never mind that the pills could potentially kill her or render her infertile. The woman doesn’t even need to prove she’s pregnant. Or if she is, there’s no way to know if she’s having an ectopic pregnancy, which could kill her. “Nothing about this is pro-woman,” Hawkins points out.

The good news is, pregnancy help centers out-number abortuaries by nearly 4 to 1, which means there are already resources in place for a post-Roe America. Also, there were more pro-life laws and restrictions passed in 2021 than in any previous year. Under Hawkins’ leadership, the pro-life generation continues to push forward and lobby to save lives.

Will You Help Me Now?

Rev. Walter Hoye held a sign reading, “God Luvs U and UR Baby! Let us help U” outside an abortion clinic. A young woman, on her way both to and from her appointment, asked Rev. Hoye, “Will You Help Me Now?”

Hear Rev. Hoye’s heart-wrenching story of why sidewalk counselors need to be prepared to help women even after they’ve had the abortion. Listen as he explains how many women have no positive male influences in their lives and therefore settle for something less than a real man. Hear how one woman couldn’t believe that he, as a man, would care or want to help her. Watch to see what happened.

Our Culture Sexually Grooms the Young

Regarding Ghislaine Maxwell, convicted of sex trafficking and grooming minors for abuse, Dr. Jennifer Roback Morse said, “The Maxwell case isn’t just about a depraved woman and her equally depraved partner and lover, Jeffrey Epstein, now deceased. The real story is that our culture sets up young women for abuse. Every day, in so many ways, our culture grooms minors for sexual exploitation.”

“As an ally of the Sexual Revolution, the culture takes every opportunity to convince youth that casual sex is natural, healthy, and risk-free, and those who oppose it are uptight Victorians.”

“Through public education, entertainment media, Drag Queen Story Hour, movies like Cuties, and even half-time Super Bowl shows, there’s a steady drumbeat. Behavior that can only be described as indecent or aberrant is offered to minors as a natural part of life.”

“The objective is convincing prospective victims that overtly sexual displays are normal and empowering, and so, softening up victims to ‘consent’ to illicit sex more readily. These are the hallmarks of sexual grooming.”

Morse concluded: “The case of Jeffrey Epstein (who died in prison under mysterious circumstances) shows that there are rich and powerful people who want to have sex with children. The culture is grooming adolescents to be victimized.”