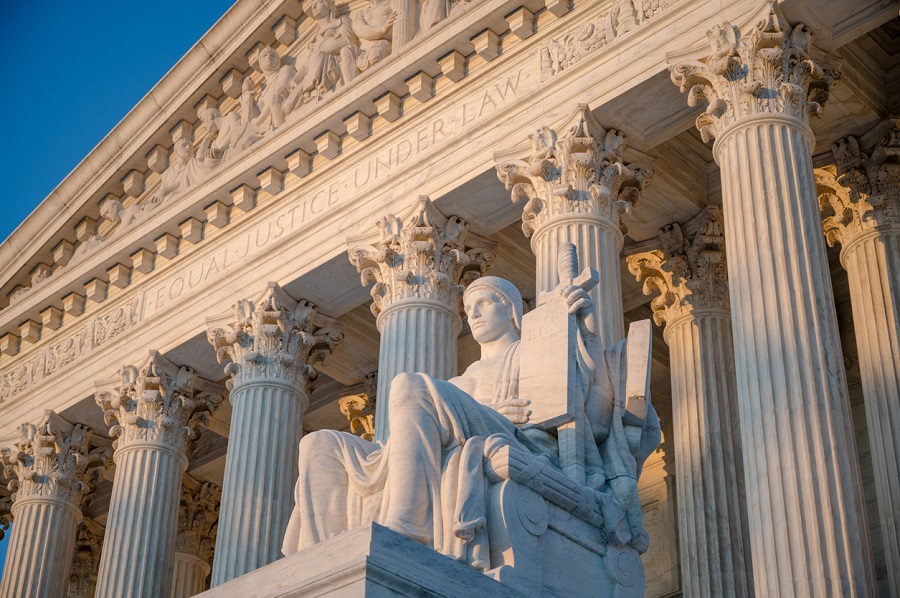 Elections have been center-stage for two weeks, starting with the Supreme Court’s abdicating its duty to resolve serious problems with our elections, to former President Donald Trump’s CPAC speech, to the House’s passing H.R. 1 on a party-line vote. Justices Brett Kavanaugh and Amy Coney Barrett disappointed the nation, but Republicans must unite to stop the illegal problems of 2020 from permanently becoming legal, which will happen if H.R. 1 passes the Senate.

H.R. 1 is an existential threat to America’s form of government, because it would create one-party rule with a Democrat Party permanently dominated by socialists and communists. (And hopefully Sen. Joe Manchin (D-WV) will keep his word to preserve the filibuster, because if H.R. 1 passes, the moderate wing of the Democrat Party would be forever eradicated, and his grandchildren would live in a country radical leftists control.)

So Republicans cannot afford to be in a circular firing squad taking shots at each other over why the Supreme Court does not have a majority of constitutional conservatives who are willing to head toward the sounds of gunfire to decide the most contentious issues. I don’t know if the GOP civil war has been canceled like Sen. Rick Scott (R-FL) said, but it needs to be postponed until we beat the deadly threat that is one step from destroying the GOP. Donald Trump and Mitch McConnell need to get along for the next 20 months, along with all their supporters.

Trump’s speech at CPAC hit hard on the issue of election integrity, and how the Supreme Court let down not just 75 million Trump voters, but every American, because elections are indispensable to the constitutional form of government that governs everyone in this nation for all generations. Yet the justices refused by one vote to hear any cases raising serious constitutional problems with the 2020 elections in several key states, with Kavanaugh and Barrett disappointing all those who supported their elevation to the High Court, as either one could have supplied the needed vote to grant review.

We need every moderate Republican and establishment Republican to stand with every grassroots MAGA activist and every constitutional conservative to defeat H.R. 1 so that the election procedures that went off the rails in our recent past do not also become our future.

Then late last Wednesday night, the House passed H.R. 1 by a vote of 220-210. Every single Republican voted against it, and every Democrat except one voted for it. That’s because both sides understand that this is an attempt at a federal takeover of elections on cynical terms that will enable Democrats to rig the election process forever, taking everything that went wrong in 2020 — and don’t let Democrats and the media lie to you, there were massive and widespread irregularities — and make those travesties permanent nationwide.

I’ve been in national politics since the Reagan years in the 1980s, ran elections for eight years as Ohio secretary of state — where we were Ground Zero in the 2004 presidential election, been chairman of a national campaign, and been on the ballot many times myself. I’ve never seen election laws not followed on as broad a scale as we saw in 2020, irregularities resulting in lawsuits. It looked more like elections I’ve seen when serving as an official election observer in troubled countries overseas.

Trump was right to hammer H.R. 1 in his CPAC speech, which would take all the vulnerabilities in current law exposed by the 2020 lawsuits and convert those problems into legal requirements. And Trump was right to say that the Supreme Court let us down by failing to hear any of the appeals from lawsuits in states were judges and election administrators rewrote state election laws, because the Constitution says that state legislatures decide how presidential electors are appointed, not judges and election administrators. That means that because every state legislature passed laws long ago — mostly in the 1800s — saying that state’s Electoral College members every four years are the electors supporting the winner of the statewide popular vote, then the statewide election must be conducted according to those laws as the legislature wrote them.

But in at least a half-dozen states, the election deviated from what the legislature mandated in state law. So people sued, and then they asked the Supreme Court to take it up. The justices’ courage to do so in 2000 is how Republicans won the White House in Bush v. Gore.

Yet the Supreme Court dashed Republicans’ and conservatives’ hopes for vindication and stage-setting for election reform when it voted 6-3 not to take up any of four cases raising legal issues from the 2020 election. The vote was only 6-3 because Kavanaugh and Barrett voted to reject those appeals.

Where Do We Find Good Judges?

Frustrated constitutional conservatives are left asking: What must be done to get originalists on the Supreme Court who are unafraid of the Left and will do their job? Democrats never fail to get liberals on the Court. Why can’t Republicans get conservatives who don’t buckle under media pressure? Ronald Reagan was hit-or-miss on Supreme Court nominees, with courageous conservatives like Antonin Scalia and William Rehnquist, but also moderates like Sandra Day O’Connor and Anthony Kennedy.

There was even more of a whiplash with George H.W. Bush (Bush 41), who gave America both the Court’s most consistently principled constitutional originalist, Clarence Thomas, and someone who turned out to be a full-on liberal, David Souter.

Although George W. Bush (Bush 43) didn’t pick any Souters, he gave us one true conservative fighter in Samuel Alito, but also an establishment elite Republican in John Roberts, who has caved on Obamacare, amnesty for illegals, the census, abortion, and other issues.

Then we had the Trump presidency. Scalia died unexpectedly during the 2016 campaign. Trump came up with his public list of Supreme Court possibilities, which was expanded several times. He had a team in the White House, more people at the Justice Department, and consulted with outside advisers from the Federalist Society and Heritage Foundation.

And Trump got great intel from those outside advisers. But anyone on the outside can do only so much. The loudest voices are the ones in the room speaking to the president each day.

Out of that process, we got Neil Gorsuch. He’s brilliant and a fighter. Even if his libertarian philosophy drives conservatives nuts on some important issues, he’s definitely been a hard-changer on the Constitution’s mandate that presidential electors are chosen by the system established by state legislatures, which means enforcing state election laws as the legislature wrote them.

Then we got Kavanaugh in 2018. We fought through the ugliest confirmation any of us can remember. And we got some type of conservative, and on the religious liberty cases brought by organizations I work with he’s voted for a conservative view of the Constitution. No doubt he will on various other issues, too.

But why won’t Kavanaugh fight? Whether he’s listening to Roberts or the mainstream media, Kavanaugh needs to embrace the fact that the Constitution gives him a lifetime appointment so he can ignore politicians and public opinion and focus solely on the law. You cannot uphold the Constitution if you don’t vote to take cases where the Constitution is at stake.

In October, Kavanaugh voted to weigh in on one of these election cases. In February, he reversed himself on the same case. Kavanaugh can’t let the Swamp and the Far Left intimidate him (if that’s what’s happened), or let Roberts’ focus on protecting the Court instead of the Constitution become his focus, too.

And then we have Barrett. The 2020 election cases were Barrett’s first big test, and she failed. Scalia would be disappointed in his star former law clerk. These appeals needed to be heard, for all the reasons Thomas explained in his dissent. This kind of controversy sits at the heart of why we have an independent judiciary, and until the Supreme Court decides these issues they will come back again, could change the outcome of future close elections, and further, erode Americans’ confidence in democracy.

To the battle at hand, if the Supreme Court had shined a spotlight on those state-law problems from November it would have helped inform the public and keep those problems from being made permanent in federal law in H.R. 1.

Yet Barrett is brand new. As damaging as her decision not to take the 2020 election cases is, if the Republic survives by defeating H.R. 1 anyway, she yet has time to redeem herself by making this a one-off to what could still be decades of courageous service.

Willing to Fight, Together

The next Republican president needs justices who are both constitutional conservatives and willing to fight, especially when the issue is one where politicians and the public are whipped into a political feeding frenzy. The Court needs justices who will never flinch from controversy, and never run from an assault on the Constitution. History shows that many constitutional conservative issues are issues where only a fearless justice will stand strong.

But all this is a discussion for 2024. Republicans will not survive that long if we allow internecine warfare to consume us now. Leftwing Democrats see a two-year window to achieve permanent power in America. This common threat requires everyone shooting in one direction, not in a circular firing squad.

We need every moderate Republican and establishment Republican to stand with every grassroots MAGA activist and every constitutional conservative to defeat H.R. 1 so that the election procedures that went off the rails in our recent past do not also become our future. This is all-hands-on-deck, because in the immortal words of Benjamin Franklin, “We must all hang together, or most assuredly, we will all hang separately.”

Ken Blackwell is Senior Fellow for Human Rights and Constitutional Governance at the Family Research Council.