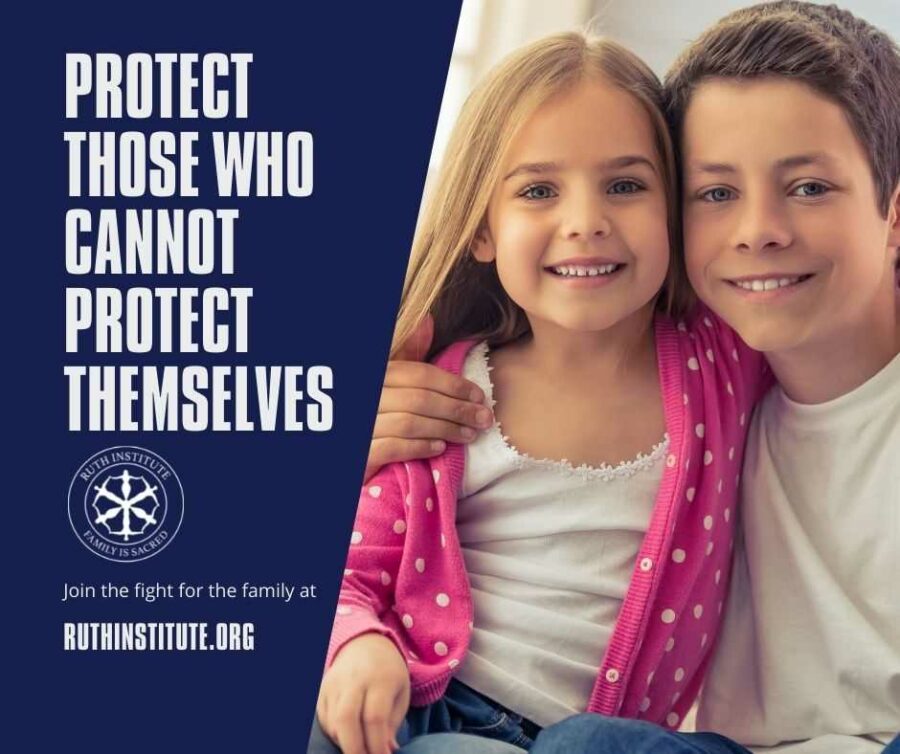 “There is no respite in the war on the family,” said Dr. Jennifer Roback Morse, Ph.D., President of The Ruth Institute. “Self-proclaimed ‘Progressives’ are absolutely committed to destroying the family and taking every opportunity to advance their cause.”

Recently, the Biden administration released a 42-page “National Strategy on Gender Equity and Equality,” which pushes the feminist agenda, but short-shrifts the family.

“In 42 pages, there are only six mentions of ‘marriage.’ None of them is relevant to the alarming decline of marriage in the United States. ‘Forced marriage’ is mentioned six times, while ‘marriage equality’ and ‘child marriage’ are each mentioned once,” Morse noted.

Also last week, the National School Board Association finally apologized for labeling parents “domestic terrorists” for protesting what their children are exposed to in school.

“This is an empty gesture,” Morse observed. “Families have every right to object to what’s being done to their children in the name of equality. In Loudoun County, VA, a parent was put in handcuffs and forcibly removed from a school committee meeting for charging that the district’s transgender policies were partly responsible for the rape of his daughter in a school restroom.”

“How can a father’s understandable anger be equated with terrorism?” Morse asked. “And, as far as we know, the Justice Department is still investigating parents who speak out at school meetings about the indoctrination of their children.”

“How is it possible to look at all of this and not see it as a part of a pattern? Progressivism attempts to dismantle the family, that institution on which society depends for its continued existence,” Morse said.

Sam Brinton, who claimed to have been tortured while undergoing therapy to change his pattern of sexual attraction and behavior, is almost certainly lying. That’s the conclusion of a comprehensive analysis of his videos. Yet this man has become an international poster-child for anti-Sexual Orientation Change Efforts (S.O.C.E.).

Susan Constantine is the founder of the Human Behavior Lab, has been an expert behavior witness in many high-profile court cases, is published worldwide, and has been on multiple national television news programs. Her masterclass, “How to Spot a Liar in 7 Seconds or Less,” was released this past summer. Dr. Jennifer Roback Morse interviews Susan Constantine on the latest episode of the Dr. J Show.

When Constantine and her team analyzed Sam Brinton’s “testimony,” the deception markers were off the charts. That Brinton refuses to name the doctor or therapy group that supposedly tortured him, and that no one can corroborate his ever-changing story, casts further doubt on his truthfulness.

Nevertheless, Brinton’s tale is out there, influencing worldwide legislation to prevent those seeking therapy for unwanted same-sex attraction from receiving it, even though there has never been a complaint against a licensed therapist practicing S.O.C.E.

Laws to ban S.O.C.E. are not about counseling, but about advancing the LGBTQ+ agenda.

Stories of people who have successfully overcome same-sex attraction are a threat to the “born this way” agenda. Watch this video to see for yourself. Then share it with others who need to learn the truth.

Roses for a Bishop Who Defends Human Integrity

Morse remarked: “We are delighted to honor Bishop Michael Burbidge with Roses from Ruth. His Excellency was very gracious to my colleague, Fr. Sullins, and me. We are impressed with the bishop’s commitment to helping his people address the gender ideology with clarity and charity. Significant controversies and confrontations are taking place within the boundaries of the Arlington Diocese. The bishop’s statement will provide aid and comfort to those who are fighting for the integrity of the human body and for scientific, philosophical and theological truth.”

The commendation stated in part: “As a sign of support for Bishop Burbidge, the Ruth Institute offers these roses and our prayers for him and for all the people of Arlington, Virginia, Catholic and non-Catholic alike.”

We All Know “Trans” Isn’t Real

On October 19, Bishop Burbidge was interviewed on the syndicated radio talk show, Catholic Answers Live. He explained that his letter was a call to parents not to “buy into that which is false.”

In the interview, Burbidge remarked: “Every part of my DNA tells me who I am. Someday, individuals who’ve ‘transitioned’ may ask their families, ‘Why would you let me do this? Look at what happened.’”

The Ruth Institute looks forward to working with Bishop Burbidge to, as he stated in the interview, “give people the language to communicate what they already know.”

In an earlier press release, the Ruth Institute said: “Thank God for clergy like Bishop Burbidge for having the moral fortitude to speak out against such dangerous delusions.”

Save the Date for The Ruth Institute’s 2022 Survivors’ Summit

Ruth Institute President Dr. Jennifer Roback Morse, Ph.D., announced that the 5th Annual Summit for Survivors of the Sexual Revolution will be June 24-25, 2022, at the beautiful West-Cal Events Center in Sulphur, LA, near Lake Charles.

“The 2021 Summit, ‘Reclaiming the Professions for Life and Family,’ was deemed a ‘transcendent fundamental experience.’ Next year’s Summit will be even better,” Morse said. “We’ve moved to the West-Cal Events Center to accommodate an even larger audience with state-of-the-art facilities and equipment.”

She added: “While we’ve just begun planning the program, those attending can expect to hear from a broad range of experts on the transgender movement, on-going efforts to sexualize children through public education, the cancel culture, saving marriage and the family, and the perilous decline of fertility known as Demographic Winter.”

Once again, there will be an invitation-only Ambassadors Program the day before the Summit to train an elite cadre of activists to oppose the Sexual Revolution in its various guises.

“Mark June 24-25, 2022, on your calendar for what we expect to be one of the most important pro-family conferences of the year: The 5th Annual Summit for Survivors of the Sexual Revolution,” Morse said.