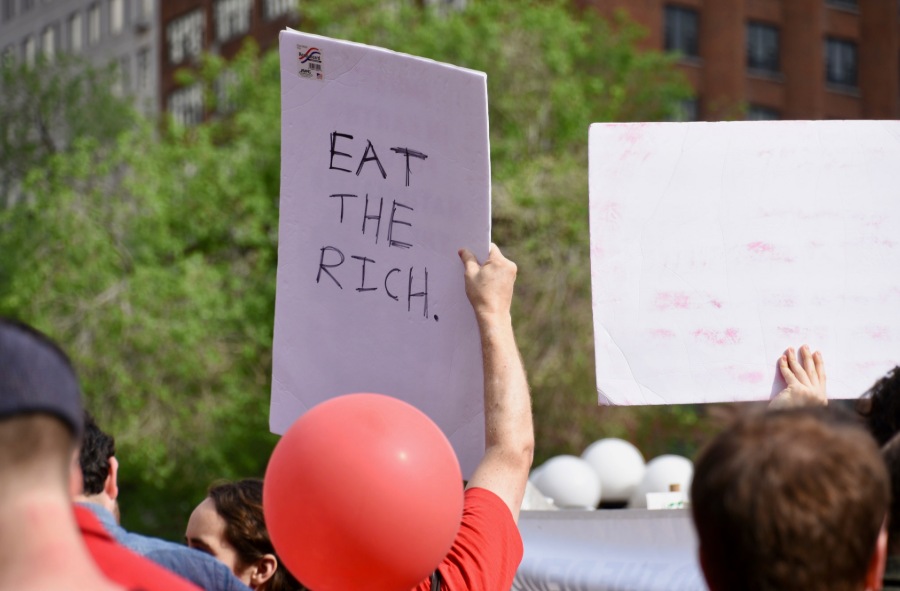 When democratic socialists were asked what they would build in place of Amazon’s HQ2 now that Alexandria Ocasio-Cortez had chased it out of Queens, the response was “a guillotine.” So says an insightful and in-depth portrait of young socialists in New York magazine. That reply distill the difference between the worldview of secular collectivists and free market champions.

One may take from Simon van Zuylen-Wood’s thorough essay that today’s socialism is built on the three-legged stool of envy, ignorance, and faith.

For all their talk about solidarity with suffering humanity, young socialists disregard the fundamental human dignity of their opponents. Their casual embrace of decapitation suggests as much. This guillotine comment is no mere aberration. “The magazine Jacobin — named for the insurgents who led France’s murderous Reign of Terror during the Revolution — has only grown in influence since its 2010 founding,” writes van Zuylen-Wood.

Escorting Jeff Bezos to the gallows for the crime of offering people jobs seems unduly harsh. That is, unless one has polarized the world into hermetically sealed camps of oppressors and liberators. One hears this contempt in the counsel of Chapo Trap House podcast host Will Menaker. He warned young socialists that they must come up with “a smart response” when asked how they plan to pay for their policies:

“The smart response is: ‘All the numbers are correct. All this is true about the deficit. But, f–k the deficit because it’s not real and it doesn’t matter.’” The audience whooped. Another option, he said, is to “turn all the existing billionaires into millionaires. Or Soylent.” (The original article did not censor the curse word.)

His comments betray not only a chilling inhumanity but a widespread ignorance — not only of economics but of exactly what socialism is.

This fondness for nebulous socialism has become especially popular with those born after the end of the Cold War. “[T]he word had lost its meaning by the time it got hot again,” writes van Zuylen-Wood. Socialism’s idealistic adherents eagerly project their hopes and desires onto it. A recent Gallup poll showed only 17 percent of Americans could properly define socialism. And the confusion is not merely limited to everyday Americans. It extends to its most ardent proselytizers.

To describe a totalitarian philosophy — one which systematically starved, enslaved, and murdered hundreds of millions of people for a century — as a minimal state is, to put it mildly, ahistorical.

Ash Sarkar promotes a brand of “fun Communism” to her followers. She’s the young British polemicist lionized by Teen Vogue for screaming “I’m literally a Communist” at Piers Morgan. “Communism is a belief in the power of people to organize their lives as individuals — their social lives, their political and their economic lives — without being managed by a state,” she told fellow leftist Owen Jones. In another context, she explained that Communism is “the desire to see the coercive structures of state dismantled, while also having fun.”

To describe a totalitarian philosophy — one which systematically starved, enslaved, and murdered hundreds of millions of people for a century — as a minimal state is, to put it mildly, ahistorical. To characterize Communism as “fun” reveals either the depths of ignorance or sadism.

… Or a false faith. Van Zuyen-Wood concludes his article by noting that he attended a recent Democratic Socialists of America meeting. Here, before the members could endorse a candidate, they had to engage in a convoluted and boring bureaucratic process. (This should give them a tiny window into life under socialism.) However, he writes the comrades sat through the ordeal enthusiastically, “like devoted members of a social club, or a church parish.”

The proposals of today’s young socialists are unwittingly unrealistic. They are deliberately so. The thirst for communion with God and man, placed in the heart by our Creator, is ineradicable. When belief in that God wanes, faith seeks new vessels of adoration. Socialists vulgarize the communion of saints into “solidarity” with the proletariat.

They swap asceticism aimed at purging their sinful passions for political activism on behalf of those they deem historically oppressed. (The article humorously notes the DSA’s “demographic makeup, as usual” is “considerably whiter” than the neighborhoods its members purportedly represent.) They switch a reasoned dialogue to discover the good, the true and the beautiful with an endless array of critical codes aimed at stamping out forbidden thoughts.

Replacing God with an Economic Idol

Socialists’ proximate exchange of productive, good-paying jobs for publicly beheading billionaires reflects their choice of an economic idol. They offer this idol in place of their deeply religious yearning for their meaning, purpose, and significance as children of God. They replace their hunger to enter the kingdom of Heaven with fantasies of an earthly Utopia. Snd tragedy inevitably follows.

They replace their hungering to enter the kingdom of Heaven with fantasies of erecting an earthly Utopia — and tragedy inevitably follows.

Free enterprise is far from perfect. But it respects the dignity of every child of God by assuring his or her agency. Virtue constrains that agency — which is just another term for “free will” — into means and ends that benefit others. And faith is the surest ground for virtue. Gouverneur Morris, one of the most virulent opponents of slavery among the Founding Fathers, wrote that “religion is the only solid basis of good morals.”

Those who believe in free markets should hope that the mass of their fellow citizens do. And adherents of true faith should do all in their power to gain adherents — before their religion is eclipsed by a misguided, and barbarous, pretender.