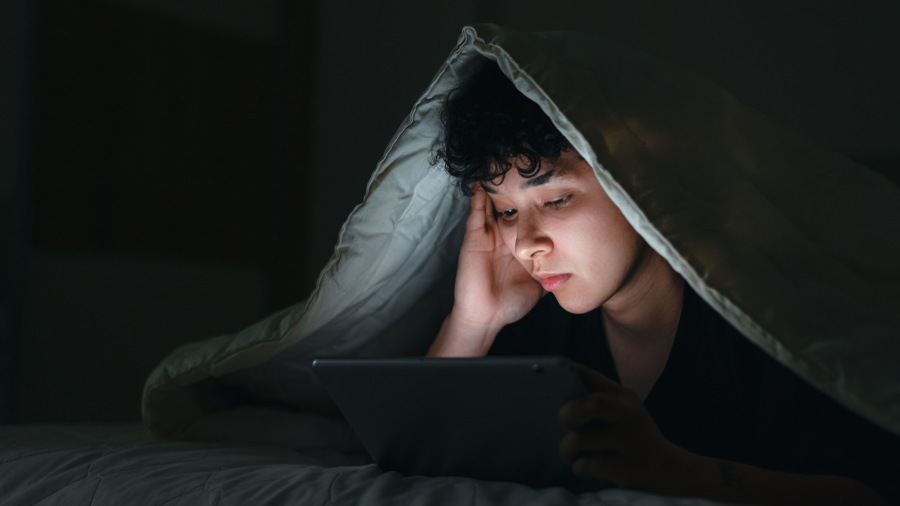 The social media site TikTok is teeming with videos promoting “top surgeries,” double mastectomies performed on women — and in some cases on adolescents — in order to help them present as male.

The website contains countless videos of young people, most of whom appear to be in their teen years, showing off their mastectomy scars, laying in hospital beds after operations and trying to raise money for the procedure, according to a Daily Caller News Foundation review of the site’s content. Young people also share videos showing the impact cross-sex hormones have on their voice and appearance, with a consistent subtext of encouragement and the promotion of medicalization.

Many experts critical of the rising popularity of transgender identities view the rise among young people as a kind of “social contagion” and credit social media with helping to spread these ideas.

“Social media has presented an image of gender transition which is far from the reality, but many teenagers buy this positive spin on a difficult process,” Stella O’Malley, psychotherapist and director of the gender-critical organization Genspect, told the DCNF. “When teenagers look at trans kids on social media, medical transition seems edgy, cool, and interesting. In reality this is a difficult pathway that is littered with complicated problems that come about because of difficulties with medicalizing our bodies.”

Young transgender people share post-operation videos to TikTok and encourage peers who are considering the procedure with affirming messages, insisting that it’s worth the pain, that they’ll love how they look and they won’t regret it. They explain their recoveries, revel in their ability to go outside without a shirt on and share their glee over looking the way they want to in their favorite clothes. 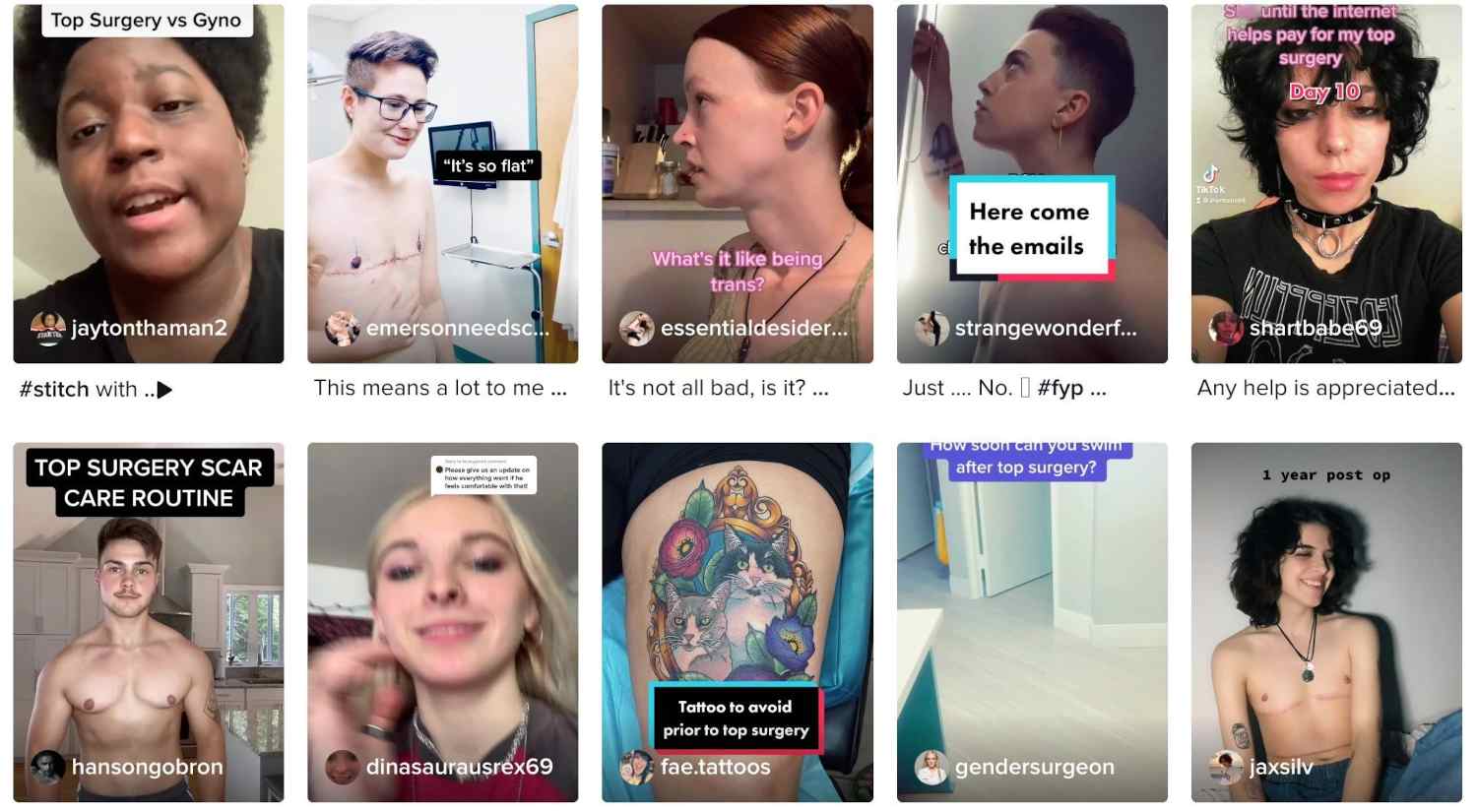 In one TikTok, an adolescent who had undergone a mastectomy encouraged girls not to throw away shirts that made them feel self-conscious about their bodies, explaining that they’ll love how they look in their clothes once they undergo the procedure.

“My first piece of advice for those of you who have yet to get top surgery is very important,” one young person said in a TikTok offering post-mastectomy recovery advice. “Keep that f—— shirt. Keep that shirt that’s been in your closet that you look at and get sad about because you know that if you had surgery you would love the way that you look in that shirt.”

Some doctors who perform sex change surgeries or administer cross-sex hormones use TikTok to promote their work, such as Dr. Sidhbh Gallagher, a Miami-based plastic surgeon who specializes in transgender surgeries. She has posted dozens of videos about the surgeries she performs and often shares photos and videos of her young post-operation patients to show off her work.

Young females exploring transgender identities encourage each other to dive deeper into the ideology, with one TikTok trend suggesting that common teenage struggles or serious mental health issues are actually just the result of gender dysphoria and would be alleviated by “coming out” as trans and pursuing cross-sex medicalization. Teens offer advice to each other about signs they might be trans, which include disliking their bodies, disliking puberty, having a short haircut, not wanting to wear “girly” clothes, not liking one’s birth name or taking an interest in people of the opposite sex.

Online subcultures on social media websites like TikTok provide a sense of community for troubled adolescents that they may not find otherwise, and trans influencers’ optimism about irreversible medical procedures is an effective way of drawing in young people, O’Malley told the DCNF.

“They find it very beguiling,” she said. “When you look at the elements that bring about social contagion — excessive rumination, repetitive discussion of problems, positive reinforcement of similarities and friendship cliques, it is easy to see how teenage girls in particular might be prone to this and also how medical transition is commonly associated with social contagion.”

Before there was TikTok, there was Tumblr, where teenagers were discussing gender ideology and adopting trans identities years before Caitlyn Jenner’s 2015 transition brought the issue into the mainstream.

Helena Kershner discovered gender ideology on Tumblr when she was 15 and viewed it as the answer to her adolescent problems: depression, an eating disorder and a persistent feeling of not fitting in, she wrote in a February Substack post. She adopted a transgender identity in adolescence and started testosterone at 18, but by the time she was 19 she came to regret her transition and stopped taking hormones, which she believed were responsible for her worsening psychological state.

“When the disillusionment fully set in, I stopped the testosterone treatment and began the process of getting my life back on track,” she wrote. “It has not been easy, and the whole experience seriously derailed my life in ways I could never have foreseen when I was that fifteen-year-old kid playing with pronouns on Tumblr.”

In past decades, patients seeking counseling and medical interventions for gender dysphoria — the sense of discomfort with one’s biological sex that motivates some people to become transgender — were almost exclusively male, O’Malley explained, but in the past 15 years there’s been a meteoric rise in females identifying as transgender. The Gender Identity Development Service at Tavistock in the U.K, the world’s largest pediatric gender clinic, saw a 5,337% increase in adolescent girls over the course of a decade.

Erica Anderson, a transgender psychologist who treats children with gender dysphoria, recommends the medical transition of children in some situations but has spoken out about the social contagion issue and the influence of social media on young women.

“What happens when the perfect storm — of social isolation, exponentially increased consumption of social media, the popularity of alternative identities — affects the actual development of individual kids?” Anderson told The Los Angeles Times.

“To flatly say there couldn’t be any social influence in formation of gender identity flies in the face of reality,” she said. “Teenagers influence each other.”

Transgender advocates have denied that social contagion is driving the soaring rates of transgender identification in adolescents and instead argue that growing social acceptance is driving transgender people to make their identities public more readily.

“It’s developmentally appropriate for teenagers to explore all facets of their identity — that is what teenagers do,” Dr. Angela Goepferd, medical director of the Gender Health Program at Children’s Minnesota hospital, told The New York Times. “Generationally, gender has become a part of someone’s identity that is more socially acceptable to explore.”

One recent study attempted to debunk the social contagion theory by disputing that transgenderism is growing in prevalence and this surge is primarily affecting young females, although a Daily Caller News Foundation investigation found numerous errors with the methodology of the study.

TikTok and Tumblr did not respond to the Daily Caller News Foundation’s requests for comment.