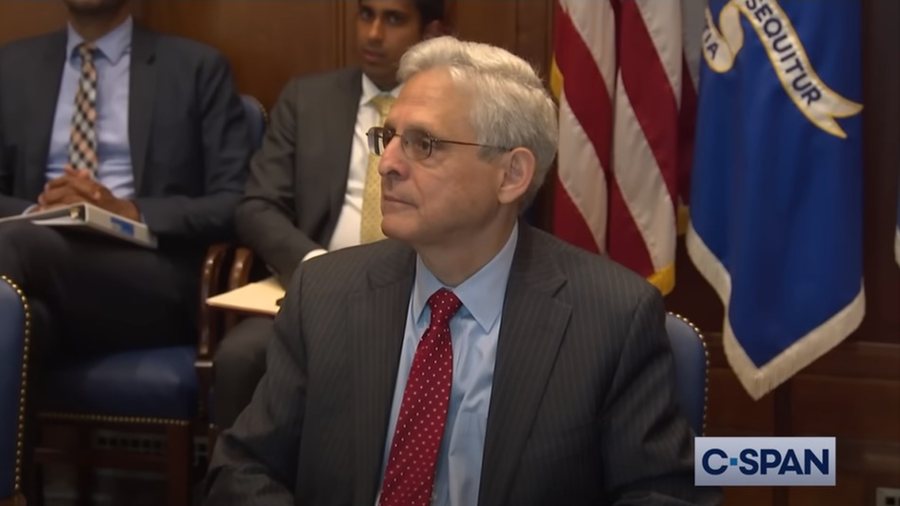 The White House still won’t comment on last Monday’s raid on Mar-a-Lago. President Biden was quickly spirited away on vacation, and the unfortunate spokesperson left behind refuses to answer any questions. But it’s easy to see why. If Biden had anything to do with this action against a former President and likely 2024 election opponent, or even knew about it and didn’t stop it, that would certainly be an impeachable offense.

Of course, it’s ridiculous to believe the White House didn’t know about something this consequential. But if anyone can sound convincing saying he doesn’t know anything, it’s Biden.

Consider that Trump was impeached for even mentioning towards the end of a phone call to Ukrainian President Zelenskyy that he might want to look into what Hunter Biden was up to and letting him know Biden had bragged about “stopping the prosecution.” A so-called whistleblower, later identified as Eric Ciaramella, wrote up a complaint greatly mischaracterizing the call. Fortunately, Trump was able to clarify what did and did not happen on that call by releasing the transcript. (Hey, the President can declassify documents, remember?) Then as now, transparency is the best option when one is telling the truth, and that’s why Trump wants the affidavit for the raid released and the “Justice” Department doesn’t.

Transparency is the Best Option — When You’re Telling the Truth

Dershowitz also said that sensitive information — names of sources, for example — can still be redacted. And let’s hope the Trump people just release the security video to the public and let us see what happened.

Dershowitz doesn’t think Trump will be indicted. For the appointee of a current President to indict a future presidential opponent, “you need Nixon-type crimes,” he said. “Smoking guns. You need absolute corruption.” He doesn’t think it can be over “what Hillary Clinton did and what Sandy Berger did.”

“The optics here are ugly,” legal analyst Gregg Jarrett said Tuesday, “and Americans deserve a greater measure of truth.” As for putting Trump on trial in a DC court, he said, “You could prove Christmas occurred in July in a DC court, but it wouldn’t hold up on appeal.”

A hearing is scheduled for Thursday on whether or not the affidavit will be made public. Trump attorney Alina Habba appeared with host Sean Duffy on FOX NEWS Tuesday evening to talk about the affidavit, and she said she does not expect it to be unsealed. “Don’t forget, Judge Reinhart is the same magistrate judge that recused himself from my Hillary case about a month ago,” she said, referring to the lawsuit Trump has against Hillary and other Democrats over the Trump-Russia Hoax. Recall that Judge Bruce Reinhart recused himself in that case, reportedly over the issue of impartiality, and if he couldn’t be impartial on that, he had no business dealing with this. Of course, he’s also the one who was presented with the affidavit by the DOJ and signed the warrant for the raid.

“He is definitely not going to be a friendly judge, necessarily,” she said, showing her gift for understatement.

She said Trump’s team has asked for an independent “special master,” a neutral party, to go through materials and “preclude any funny business” to see what might be safe to reveal, but the DOJ has indicated they do not want that. (My question: WHY NOT?) She also said they still need to go through the documents and see what is privileged.

By now, the FBI has returned the three passports (one current, two expired) that they never should have taken in the first place. And a few commentators have done my joke about Trump being a flight risk. “I don’t know how [taking Trump’s passports] is done even in error,” Habba said. Indeed, taking someone’s passport is a big deal and normally requires a special, separate warrant. “Unfortunately, there are a lot of questions that are unanswered at this point,” she said, “so we’ll see what happens on Thursday.”

Here’s some bad journalism about the passport issue, from CBS News’ Norah O’Donnell.

As Duffy reported, Peter Strzok tweeted a snarky attempt at humor that sounded right out of 2017: “Please oh please keep asking how you can turn down the temperature in the country. And why does he have two passports? The Russian passport, of course, is kept in a vault at Yasenevo and only swapped out at third country meets, so it can’t be that one.”

It shouldn’t surprise us that Strzok is lamely sticking to his story of Trump being in league with Russia, even though we all know it was a frame-up, and he knows we know, and we know he knows we know.

So, how can we tell that the story about “nuclear secrets” was made up after the fact? If that had been a real situation, Attorney General Merrick Garland wouldn’t have waited weeks to get those documents. But this involved “weeks of meetings between senior ‘Justice’ Department and FBI officials.” I can hear them now: “Okay, he needs to look really, really guilty. So…do we target the home and grounds of a former and potentially future President with a land, sea and air invasion, or do we not? Think about the pros and cons, and we’ll meet again closer to the election.”

The Failings of Merrick Garland

Jonathan Turley, in his new piece “The Incredible Shrinking Merrick Garland,” accurately describes the failings of our esteemed attorney general but concludes, oddly, that the AG’s problem isn’t one of politics but of personality. He just doesn’t have the personality to be attorney general.

Turley still thinks of Garland as a moderate — never mind that virtually every decision he’s made as head of “Justice” has smelled of political hackery and favored the left. He calls Garland a man of “unimpeachable integrity and ethics.” Funny he should use the word “unimpeachable,” as Garland seems eminently impeachable to me, in the literal sense.

But here’s a thought: If it’s true that, as Turley says, “Garland’s judicial temperament may be ill-suited to the demands of this office,” maybe the decisions emanating from that office are really coming from his second-in-command…(drum roll)…Deputy Attorney General and former Obama attorney Lisa Monaco. As Garland shrinks in power, perhaps she grows. Here she is from January of this year, delivering “tantalizing news for those who want to see those at the highest levels brought to justice over the attempted coup,” talking about the DOJ’s “active criminal investigation into Trump fake electors coup plot.” It doesn’t get more political than that.

For many months, Revolver News has been doing some great reporting about the possible role of the FBI in the January 6 riot. Most recently, they say that “the FBI’s explanation for the January 6 pipe bombs is in fundamental conflict with a growing body of widely available facts.”

These are the bombs that were discovered in front of the DNC and RNC headquarters just before the scheduled 1 PM congressional certification of the vote. The latest problem concerning them has to do with the old-fashioned mechanical kitchen timers — with a maximum time setting of one hour — used on the bombs. But according to security footage, the bombs were planted at about 8 PM the evening of January 5, 17 hours before they were discovered.

As Revolver News reports, the first timer was found near the RNC at 12:40 PM, with 20 minutes left on the timer, which would mean a detonation was timed to exactly coincide with Congress convening at 1 PM. The DNC timer also had just 20 minutes left, but the timer was stuck at that point.

So their question is, did the pipe bomber just luck into the bombs being found at the right time to create the apparently hoped-for diversion, or was it no accident that they were found when they were? Their analysis, they say, is “absolutely devastating” to the FBI”s official narrative of the attempted bombings.

If the timers actually worked — and, yes, they were real bombs with real explosives — they would’ve gone off at about 9 PM on the 5th and would not have created a diversion for law enforcement personnel at the Capitol the next day. Ditto if they happened to be discovered earlier on the morning of the 6th. In fact, that would’ve led to evacuations and heightened security around the Capitol building. Thus, the bomber had to know his bombs would be discovered and reported to authorities shortly before 1 PM.

Since the RNC bomb was discovered at 12:40, the Capitol Police were on the scene at 12:49, which was just one minute before the first big attack at the west side of the Capitol. “In other words,” the report says, “we see nearly perfect timing to divert resources away from the breach.” A woman who lives nearby, identified as Karen Younger, said she’d found the bomb while she was on her way to do laundry. But back in February, Julie Kelly at American Greatness found details that suggest yet another FBI hoax.

At the time she found the bomb, Younger was working as a project manager for FirstNet Authority, a company that “prioritized emergency communications during an attack or disaster.” It counted the Justice Department among its clients and had signed a $92 million contract with the FBI just a few weeks before. That might not be significant, but it’s something to be explored.

The DNC bomb was placed in plain sight in a high-traffic area. How was that bomb not discovered? It even had to evade detection by the Secret Service with bomb-sniffing dogs, as Kamala Harris was stopping by. She was in the building for two hours before the bomb was detected outside. The dogs apparently had just come down with COVID and lost their sense of smell.

For when you have time, Kelly’s article goes into much more weirdness about the planting of these bombs and some absurdly on-target predictions relating to them. There’s just so much about January 6 we still don’t know, and Nancy Pelosi’s kangaroo court is too busy playing politics to even look at it.

It would be nice if the FBI would release ALL the security footage of the DNC bomber, but they won’t. Darren Beattie of Revolver News appeared with Tucker Carlson Tuesday night to say,

The FBI is withholding, hiding, concealing from the public critical footage of the pipe bomber actually planting the bomb…and the question is, why would they…hide precisely the piece of footage that would be most likely to help them get the public to catch and identify the perpetrator?

Plus, since they’d likely suspect a Trump supporter — a “right-wing extremist” — to have placed these bombs, why aren’t Democrats, especially the January 6 committee, clamoring for his arrest? Something smells off, but then, that’s typical of anything involving the FBI.