Should the Liberty Bell Leave Philadelphia? 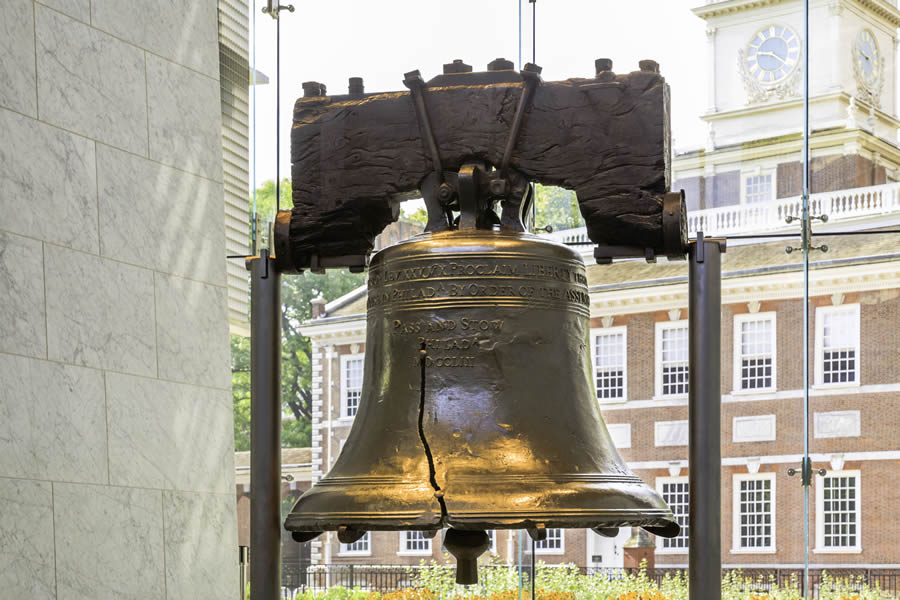 When most Americans think of Philadelphia — although probably fewer today than ever before, given the low level of history education in American schools — they probably think of the founding of the United States, the Liberty Bell and the city’s nickname, the City of Brotherly Love.

Having been to Philadelphia at least 20 times, I am among the many Americans who have warm feelings toward America’s founding city. My daily radio show has a large and enthusiastic listener base there, and I have a son who lives nearby.

So, it is with no joy that I write about the transformation of Philadelphia into something far removed from the principles of the country it helped birth. Philadelphia’s leading institutions — such as the University of Pennsylvania, the Philadelphia Orchestra and the Philadelphia Flyers — provide depressing evidence.

We’ll begin with the Philadelphia-based University of Pennsylvania, one of the country’s Ivy League colleges. When Harvard Professor Steven Pinker, a liberal and an atheist, recently described American universities as a “laughingstock,” he could have been referring specifically to the University of Pennsylvania, which, among other Philadelphia institutions, is committed to dismantling American and Western civilization.

For decades, a portrait of William Shakespeare, the greatest English-language playwright who ever lived and the most widely read playwright in the world, hung over the main staircase of Fisher-Bennett Hall, home to Penn’s English department.

Given Shakespeare’s stature as an English-language writer, what other writer would an English department so honor? But that question only makes sense to those who believe that excellence should dictate what writer’s portrait should hang in a university English department. The idea that excellence is all that matters in assessing artists is fundamental to Western civilization and is a primary reason for its ascent. It took a long time for humanity to transcend ethnic, racial, tribal and economic criteria for assessing art.

But the English department at the University of Pennsylvania, dominated as it is by those who equate Western civilization with “white supremacy” (aka leftists), voted to remove the Shakespeare portrait. As reported in The Daily Pennsylvanian, the university’s student newspaper, “The English Department voted to relocate and replace the portrait … in order to represent a more diverse range of writers, according to an emailed statement from (Department Chair Jed) Esty, who declined to be interviewed.”

A few years later, in December 2016, students took down the portrait. In its place they put up a portrait of Audre Lorde, a black feminist lesbian poet who died in 1992.

Equally nihilistic is a story out of the University of Pennsylvania Law School. On Aug. 9, 2017, tenured Penn Law professor Amy Wax and University of San Diego School of Law professor Larry Alexander co-authored an opinion piece titled “Paying the price for breakdown of the country’s bourgeois culture.”

Its thesis was that the rejection of American bourgeois middle-class culture is the primary reason for most social ills in America today:

(American) culture laid out the script we all were supposed to follow: Get married before you have children and strive to stay married for their sake. Get the education you need for gainful employment, work hard, and avoid idleness. Go the extra mile for your employer or client. Be a patriot, ready to serve the country. Be neighborly, civic-minded, and charitable. Avoid coarse language in public. Be respectful of authority. Eschew substance abuse and crime.

Within a few weeks, a petition was signed by 4,000 people calling for Wax’s dismissal, and the dean of Penn Law, Ted Ruger, wrote an op-ed in The Daily Pennsylvanian, ostensibly about Charlottesville but really about Wax, in which he implied her views were “divisive, even noxious.” Most significantly, he wrote, “It is important that I state my own personal view that as a scholar and educator I reject emphatically any claim that a single cultural tradition is better than all others” (referring to Wax’s position that those bourgeois values are superior values).

After hundreds of her colleagues demanded Wax be fired, Ruger forbade her from teaching any first-year required courses at Penn Law.

Now to the Philadelphia Orchestra, one of the world’s greatest. The orchestra recently received more than 500 applications for the position of assistant conductor. According to my Philly sources, the four finalists included only one male (a black male, for the record), despite the fact that males make up the overwhelming majority of orchestra conductors in the world and therefore the overwhelming majority of the applicants for the Philadelphia Orchestra position. There is little reason to believe that, as talented as they may be, the four were chosen on the basis of artistic excellence alone. The orchestra’s gifted conductor, Yannick Nezet-Seguin, has declared this the year of the woman conductor and the year of the woman composer.

Most musicians are on the left, but Nezet-Seguin makes it more obvious than most. In a recent concert, the Philadelphia Orchestra featured the premiere of Philadelphia Voices, “a political rant put to musical garbage,” as some Philadelphians associated with the orchestra described it to me. In the fifth movement, named “My House Is Full of Black People,” the black teen narrator chants: “The county is full of black people/ All wanting to be heard/ While old white men draw lines on maps/ To shut all of them up.” Later in the movement, he yells, “If you would all just f***ing listen!”

And this year, the Philadelphia Flyers hockey team removed the statue of American singer Kate Smith that the team had erected in 1987. Her rendition of “God Bless America” was played at every Flyers home game since 9/11, and she herself sang it for the Flyers in the 1970s. But last month, the team learned that Smith had sung a song with racist lyrics — “That’s Why Darkies Were Born” — in 1931. That Paul Robeson, the great black singer — and enthusiastic supporter of Josef Stalin — also recorded the song doesn’t matter. To the Flyers (and New York Yankees), Smith’s whiteness undid all the good she did for America.

Will Philadelphia next remove the Liberty Bell? After all, it was commissioned by slave owners and inscribed with a verse from the Bible.

Christmas, Persecution, and a Higher Authority

Gratitude: We Have It Awfully Good