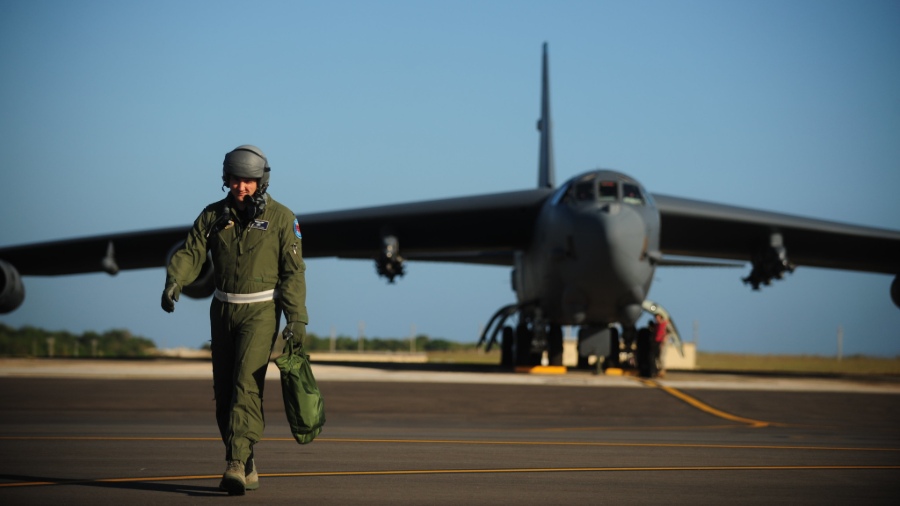 Capt. Joshua Logie walks away from a B-52 Stratofortress at Andersen Air Force Base, Guam, after a mission in support of exercise Cope North in 2017.

President Donald Trump and Congress did what they had to do to get out of town for Congress’ two-week recess last Friday, agreeing on a continuing resolution that is a symbol of Congress’ inability to finish work on its primary responsibility: to “pay the debts and provide for the common defense and general welfare of the United States.”

In the real world, when you fall behind on a task at work, you work longer and harder to catch up. In Washington, decisions are punted into the future, but vacation begins promptly on schedule.

Operating under a continuing resolution means the defense budget will stay at 2019 levels at least until Nov. 21, by which time presumably Congress can pass full-year appropriations bills.

Furthermore, because the resolution was not agreed upon until the last day of the fiscal year, the Department of Defense as well as the other departments had to issue instructions on how to operate in case of a shutdown, which means a substantial waste of time and resources went to preparing plans and making provisions for a shutdown of unknown duration.

In the meantime, the Department of Defense will have to live with substantial limitations on what it can do and how it can re-shape its programs to meet the needs outlined by the still-new National Defense Strategy.

Continuing resolutions have become the rule in recent years, and they continue to impose substantial costs on the military in terms of lost time for training, budget execution, and wasteful duplicative work.

Losses in time for training and maintenance cannot be recouped with money, and the uncertainty of not having full-year appropriations in place mean training must be scaled back into the following year.

A continuing resolution also crunches the timeline for new equipment programs, since it does not allow systems that were not in last year’s budget to begin. A project scheduled to start in October can’t begin if funding into the new year is uncertain. These projects literally start behind schedule.

“Every day that we have a CR means it’s a day that … everything is impaired,” Secretary of Defense Mark Esper said of the damage done by continuing resolutions.

The Pentagon has identified three projects — all high priorities in its efforts to modernize the military — that will be damaged by this irresponsible approach to spending legislation.

Hypersonic weapons, which for Defense Department leaders will be key for prevailing in great power competition, will be hurt by the inability to make the long lead-time purchases necessary to keep the program on track.

Helicopter training will be set back because the 32 training helicopters needed to replace the TH-57 Sea Ranger Fleet, which has been training naval officers since the 1970s, will have delayed delivery.

B-52 bombers, many of which date from 1960 or earlier and operate with some of their original components, will have to wait to have GPS interfaces installed.

These giant planes are still heavily used and expected to be operational until the 2050s. The GPS interfaces are critical to their readiness and capabilities. Lack of a full-year appropriations bill means assembly will be delayed and the program will have to wait to be upgraded.

“Every day that we have a CR means it’s a day that … everything is impaired,” Secretary of Defense Mark Esper said of the damage done by continuing resolutions.

“Not only if this drags on for weeks, months, but it could [end] up being a year-long continuing resolution. That is devastating to our military readiness.”

Let’s hope Congress gets this message when it returns on Oct. 15.