Sheila Walsh on Simone Biles: I Was Shamed for Putting My Mental Health First, Too. I Applaud Her Courage

I know what it’s like to take that leap of faith, no matter who is watching, no matter what others might say. 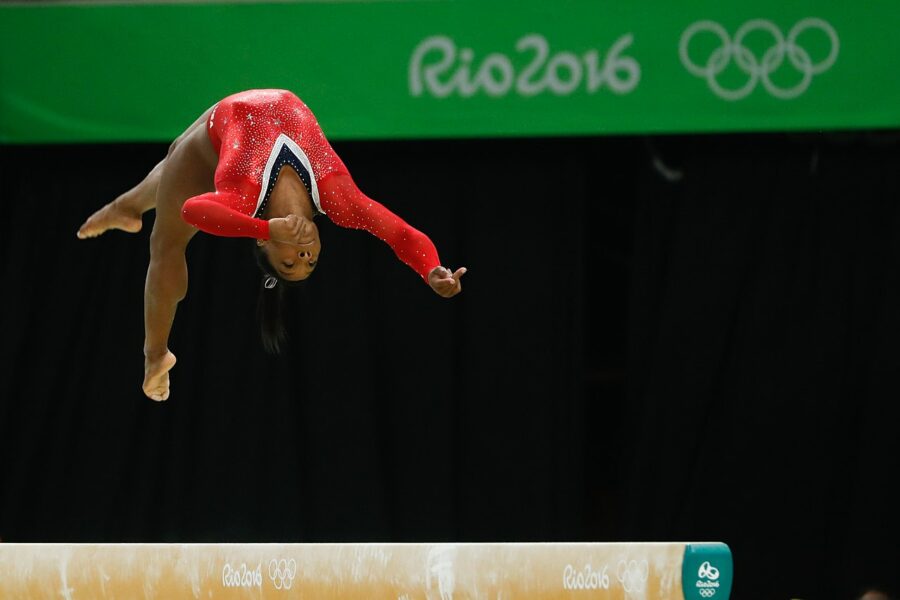 EDITOR’S NOTE: Late Saturday night, gymnastic superstar Simone Biles pulled out of another Olympic event, this time the floor exercises. Our Life Outreach colleague and friend Sheila Walsh is one of the few who can truly relate to what Simone is going through. In 1993, Sheila was at the top of her game as well, when, like Simone, live on the air, something went wrong. And like Simone, she put her mental health — and life — ahead of her fame and career.

In a Friday column for Fox News, she offered her thoughts on Simone Biles and encouragement for those are silently suffering. We share that column here.

“You’re the weak link in the chain. Your career will be over.”

That’s what I was told on the day my life fell apart.

I’d been the co-host of a Christian talk show for five years — discussing the news and interviewing guests with a smile on my face — but inside I’d been falling apart a little more every day.

The pressure of two shows five days a week, then flying out to speak and sing at events every weekend had finally caught up with me. I was sinking deeper and deeper into the pit of severe clinical depression. I knew that I needed to get help and I needed to get it now.

As I left the studio that day, one of our senior staff asked me to take a walk with him. His words weighed like lead on my soul.

“Sheila, if you do this, you’ll never be special again.”

“You’re the weak link in the chain.”

“If people find out that you’ve been in a psychiatric hospital, your career is over.”

I Felt the Ache of Simone Biles

I watched the U.S. gymnastics team walk into the arena on Monday in Tokyo, their red, white, and blue leotards shining in the spotlight. I could hardly breathe as I watched Simone Biles take a deep breath and steady herself before adopting her pose and smiling as she looked at the challenge ahead.

Can you imagine how hard it would be to utter the words, “I need help” when your friends think you’re fine and you’re certain that your world is about to collapse around you?

Already a legend on the vault, as she ran toward it and her feet left the ground, something went wrong. We all gasped. We all waited. What had happened?

When the news trickled out that she was withdrawing to take care of her mental health, I felt an ache inside. I know what it’s like to take that leap of faith, no matter who is watching, no matter what others might say.

Because of my experience, I also know the importance of supporting those who are suffering in the pit of clinical depression. Especially those who speak up and seek help!

How are We Still Here Almost 30 Years Later?

Do you know how many are silently suffering? It’s estimated that nearly 1 in 5 U.S. adults live with a mental illness. One in five of your friends, who are smiling and totally fine on the outside, could be fighting for their life on the inside.

Can you imagine how hard it would be to utter the words, “I need help” when your friends think you’re fine and you’re certain that your world is about to collapse around you? Can you imagine your response being anything less than loving, gracious, and supportive?

As a country, we’ve made great strides when it comes to destigmatizing mental health since I found myself checking into the psychiatric hospital back in 1993, but I’ve been disheartened to read and hear some of the commentary on Simone’s choice to prioritize her mental health.

I recently had to relive that conversation while writing my new book, Holding On When You Want To Let Go, which shares my personal journey made me wonder — how are we still here almost 30 years later?

It’s OK to not understand her choice, but it’s not OK to not support someone’s mental wellbeing.

If mental health struggles showed up on an X-ray, I like to think that there would be greater sympathy and understanding, but we are slowly learning. Brave women like Simone Biles are leading the way.

She has always been special, and she always will be, not because of her extraordinary athleticism and spectacular giftedness, but because of who she is.

If my month in a psychiatric hospital taught me anything — and it taught me much — it’s this: it really is OK not to be OK. I promise.

From Scotland, Sheila is a wife and mom and in her spare time she is an author, Bible teacher and television host. She has spoken around the world to over 6 million women and reaches a potential 100 million people daily as co-host of the Life Today television program. Her new book, out in September, and available now for pre-order, is Holding On When You Want to Let Go: Clinging to Hope When Life is Falling Apart.