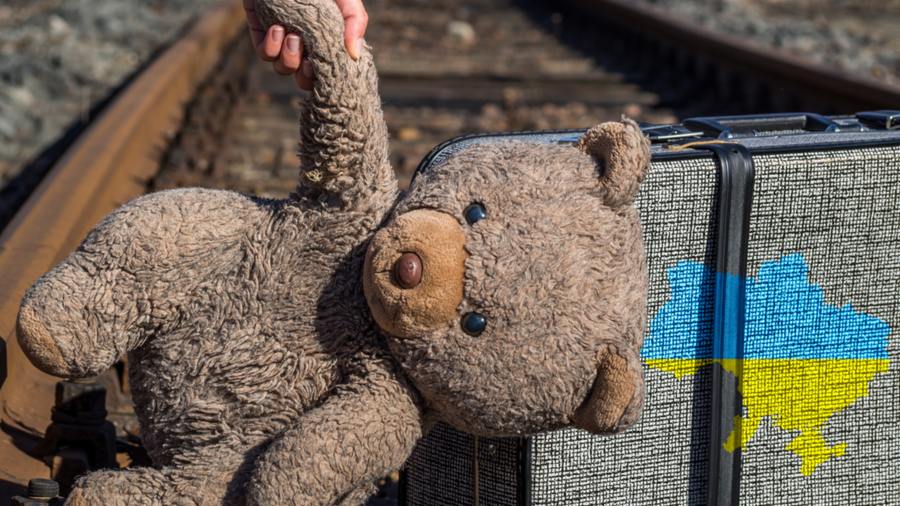 As most true heroes will tell you, if you can get them to talk about themselves, they are drawn to running toward the fire rather than away from it — not because they possess extraordinary courage or remarkable strength, but because of a deep sense of purpose.

One week ago, a handful of strangers that included Vlad Finn, Tyler Merritt and a small group of U.S. veterans volunteering with the Aerial Recovery Group walked across the border of Poland into Ukraine at the exact moment the sirens were blaring for the nightly curfew.

They had 72 hours to complete their mission of rescuing as many of the country’s orphans as they could in areas under attack and bringing them to safety.

“More than 400 orphans have been rescued so far,” said Merritt, a retired member of the Army’s elite 160th Special Operations Aviation Regiment who is working with ARG, a team of battle-tested U.S. veterans. The United Nations Children’s Fund has reported that over 1 million children have escaped from Ukraine since Russia began the war a month ago. The deepest concern was that these children would be abducted, leading to child trafficking, exploitation, or death.

Merritt is the kind of guy always driven by purpose. He founded his company, Nine Line Apparel, which makes patriotic and military-supportive clothing and gear, in part to employ area veterans in Savannah, Georgia. When his friend Scooter Brown said he was in the process of adopting a child in Ukraine when the war started, and consequently found out there were a lot of children in peril there, Merritt got involved.

Merritt arrived in Poland where he met up with several veteran volunteers from ARG, along with Finn, who is also driven by a higher purpose, albeit different than that of Merritt. While Merritt is a tactical warrior, Finn said he has a personal connection to the orphans in Ukraine — because not that long ago, he was one of them.

“I was born and raised in Kharkiv, Ukraine, until I was 15 years old with my younger brother Denis,” he explained from his home in California. “My father passed away when I was 6, and my mom started drinking heavily.”

“I ended up on the streets and stayed on them for a couple of years, sleeping wherever I could find warmth and depending on the kindness of strangers,” he said.

At age 11, he ended up in an orphanage. His brother was in a different one about 30 miles from him.

“I was able to visit with him a couple of times with my caregiver from the orphanage,” he said.

Finn’s brother visited America in 2005 with a small group from his orphanage, and an American couple hosted him for two weeks. “They fell in love with him and decided to adopt him, but the process took two years,” Finn said. “Toward the end of the process, they found out Denis has a brother and they need to adopt him as well. By that time I was 15, and at first, they said no, but after a while, they had a change of heart and decided to adopt both of us.”

The family immediately bonded. Despite not knowing a bit of English when he got here, he immediately made the local high school soccer team, went on to earn a degree in finance, and moved to California.

‘I Knew I Had to Go and Help There’

“When the news of Ukraine’s invasion broke out, I knew I had to go and help there,” he said. “My first thought was to join the international legion of defense, but I have no combat experience and figured I wouldn’t last long.”

Instead, he decided to go and help out in any way he could. “I got linked up with Aerial Recovery, which has been rescuing orphans from dangerous areas of Ukraine and setting them up in the eastern part of the country. It couldn’t be a more perfect fit since I was one of those orphans before, except they have it a lot worse because of the war. Helping them and spending some time with them was an honor and an incredible opportunity to make a positive impact, just like I had many people throughout my life do for me.”

They began a relay system of volunteers not just to save the orphans but also to keep them in their home country. And out of the hands of the Russians.

As soon as Merritt, Finn, and the ARG team were in Ukraine, they quickly got to work. Finn knew the language and where to go and Merritt knew how to properly set up safe houses, and they all distributed the supplies they had acquired. Most importantly, they began a relay system of volunteers not just to save the orphans but also to keep them in their home country.

And out of the hands of the Russians.

“When I was out there, there was two Ukrainian caregivers for the orphans we were transporting out of the city, and (the Russians) pulled them out of the 30-passenger van full of orphans and, in front of the orphans, executed them,” Merritt said.

“The driver of the van said he had to run through the barricade, and he eventually linked up with us,” he added. “But there are some orphans who had to watch the only people they’ve ever known as caregivers get executed. And that’s where we’re looking backward, at Schindler-esque tactics. And it’s not that Russians are bad — it’s that Putin’s bad. And everyone should know that leadership has significant consequences.”

Merritt and Finn said they will be back to work with the ARG for another 72 hours in less than a week. The Savannah veteran and entrepreneur said he is blown away by the work the ARG is doing and the people who are stepping up to help them.

“This is an incredible organization that is completely outside of their element,” Merritt said. “They are doing God’s work, risking their lives on a shoestring budget and saving and protecting Ukraine’s treasure, their children.”

The humanitarian organization has signed a memorandum of understanding with the Ukrainian government with a policy of keeping the children in Ukraine but removing them from the dangerous areas where many of the orphanages are located.

It costs about $500 to move each child, plus more for side payoffs to make that happen as well as paying the drivers who are risking their lives to rescue these children.

Outside of putting it all on the line personally, Merritt has also raised over $100,000 through Nine Line: “If we could get other organizations to help out with the Aerial Recovery Group, that would be great.”

Salena Zito is a CNN political analyst, and a staff reporter and columnist for the Washington Examiner. She reaches the Everyman and Everywoman through shoe-leather journalism, traveling from Main Street to the beltway and all places in between. To find out more about Salena and read her past columns, please visit the Creators Syndicate webpage at www.creators.com.