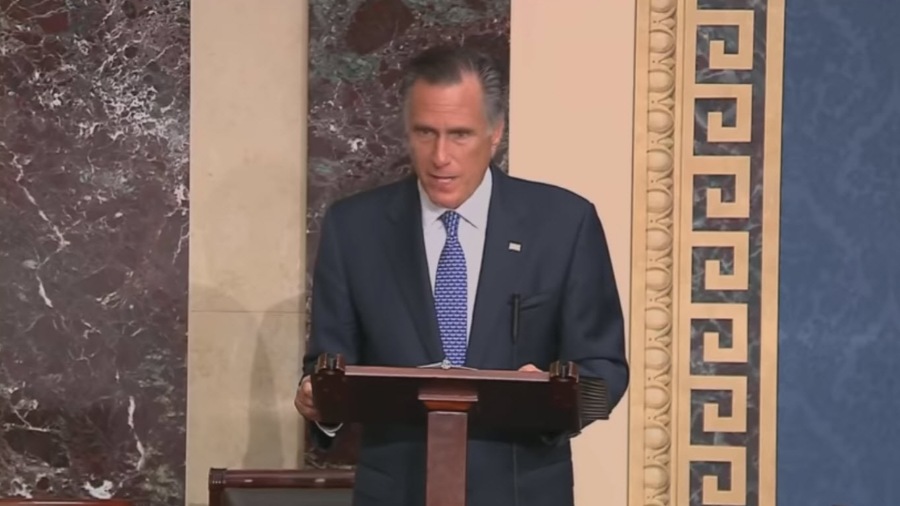 Bash asked Romney whether he fears the party won’t “be able to overcome Trumpism in the near future.” Romney didn’t object to Bash’s negative characterization of Trumpism. He merely responded that he believes “Trump will continue to have a substantial influence on the party” and that those other than Trump who are rumored to be GOP presidential candidates in 2024 “are trying to appeal to kind of a populist approach.”

Romney concluded: “I don’t think Trumpism is going away, but I hope that we can have disagreements over policy and a vision of our respective parties without continuing to promote a narrative which puts democracy itself in jeopardy. And when you tell people that voting doesn’t work and that democracy can’t work because we don’t have legitimate elections, that is a very dangerous thing to be saying.”

Romney seems more comfortable breaking bread with leftist CNN anchors than grassroots Republicans. He clearly believes Trump is an ill-mannered rogue, but his remarks also confirm that he objects to the current direction of his party.

Like other Trump critics, Romney calls Trumpism “populist.” He doubtlessly laments this trend. A populist is defined as “a person, especially a politician, who strives to appeal to ordinary people who feel that their concerns are disregarded by established elite groups.”

I admit that I used to associate “populism” with demagogic politicians who cynically appeal to the so-called common man to gain power for their own political gain without really being interested in improving the plight of ordinary people. But I don’t believe that pejorative connotation applies to Trump or his agenda. The dictionary definition, however, does describe Trump — and his establishment nemeses.

From the time he announced his candidacy in 2016, Trump has connected with ordinary Americans whose interests and wishes have been ignored by an elite Washington establishment, with its byzantine, unaccountable bureaucracy. He sold himself as an outsider who would bring a new, unorthodox approach to politics as usual that would focus on getting things done despite the bureaucratic roadblocks installed by our entrenched ruling class.

Unlike former President Barack Obama and contrary to the media’s lies, Trump didn’t run roughshod over the Constitution to advance his agenda but brought a can-do businessman’s approach to the Oval Office and achieved an impressive list of accomplishments in his first term. He did things previous politicians disingenuously promised to do, such as moving the U.S. Embassy to Jerusalem, and took action that previous politicians wouldn’t have even considered, such as implementing Operation Warp Speed to produce multiple COVID-19 vaccines with previously unthinkable alacrity. Despite the haters’ endless ridicule, he also pulled off a Middle East peace deal that is the secret envy of all establishment foreign policy “experts” who said it couldn’t be done.

None of these accomplishments or countless others are the work of a populist demagogue. But they do redound to the benefit of the common man and all Americans — just as his pro-growth economic policies benefited all income groups, especially minorities. This was the work of the dictionary-described populist, not the type of populist soul mates Dana Bash and Mitt Romney have in mind.

We can expect no different from the liberal Bash, but Romney’s sanctimonious hypocrisy is getting older and older. Like his liberal friends, with whom he is more in step than the grassroots Republicans who nominated him in 2012, Romney believes that Trump’s election contests threaten democracy.

Nonsense. Trump has challenged the election through his bully pulpit and in courtrooms across the land because, along with millions of other Americans, he believes the election was stolen. Unsuccessful court challenges don’t prove cheating didn’t occur, nor do repeated claims that there “is no evidence.” If the election was, in fact, stolen, I dare say that would, by definition, represent a far greater threat to democracy.

Why doesn’t Romney express concern over the inexplicable anomalies tainting this election and the unconstitutional changes in laws that obliterated the integrity of our ballots and paved the way for widespread cheating? Why doesn’t he demand federal election reform to prohibit the relaxation of voting procedures? Why doesn’t he crusade against social media oligarchs who censor conservative speech in a way that truly threatens democracy?

Why doesn’t he condemn liberal media bias against Trump and their lack of scrutiny of the failing Joe Biden? Why doesn’t he call for an investigation into Facebook’s Mark Zuckerberg for his having poured an obscene amount of money into this election? Why can’t he grasp that the public’s genuine distrust of the election’s legitimacy imperils the democratic process infinitely more than Trump’s rhetoric or legal challenges? We get nothing but crickets from Romney.

Trumpism is Here to Stay

Romney’s unabashed hatred for Trump perhaps blinds him to the reality that Trump is a wildly popular president, notwithstanding that he is the object of hatred among those whose anti-American agenda he has thwarted. Romney’s willful imperviousness to the extent of Trump’s appeal precludes him from recognizing that this year, we had a perfect storm for unprecedented cheating. He can’t believe the election was stolen, because he refuses to believe Evil Orange Man could have won.

Lament all you want, Sen. Romney, because you are correct that Trumpism is here to stay, as his supporters appreciate and endorse his unapologetic pride in this country; his resistance to the left’s destructive agenda, which itself is undemocratic in every sense; and Trump’s agenda to literally make America great again.