After Seeing ‘Legal Experts’ Testify, I’m Proud to Be a Republican 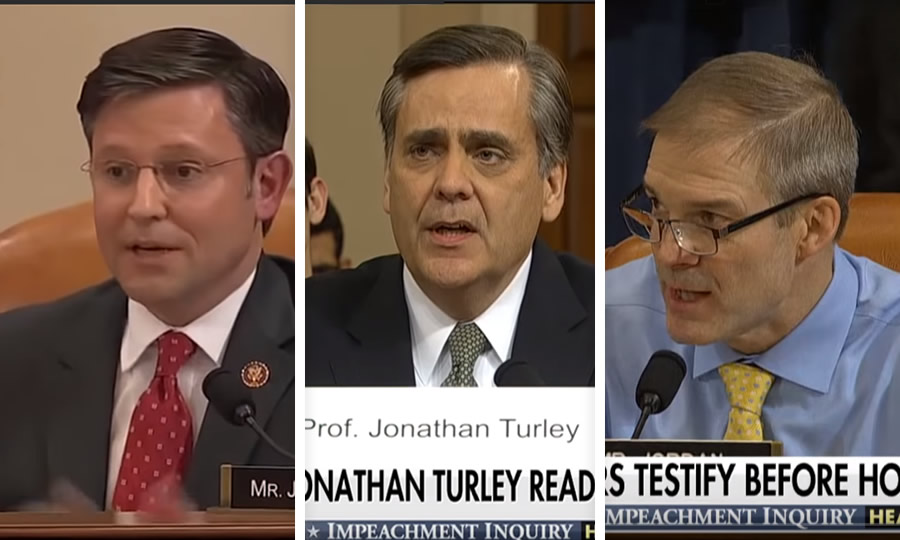 I don’t know when I’ve been so proud of my fellow Republicans.

During yesterday’s shockingly bad House Judiciary Committee hearing, it was the Republicans (along with one objective legal expert, Jonathan Turley), who showed themselves to be the adults in the room. The rest of the participants, as the day wore on, increasingly showed themselves to be drenched in Trump-hate so caustic, it long ago dissolved any real sense they might have once had about the principles of justice as espoused in the Constitution.

I would say this hearing was like the old nursery rhyme: “When it was good, it was very, very good, and when it was bad it was horrid.” (My staff writer/researchers are still asking for hazard pay.) The horrid part was probably worse than you even imagined, with three of the four “expert” witnesses so tainted, no lawyer in his right mind would put them on the stand in an actual trial.

You know by now that one of the witnesses chosen by House Democrats to testify, Stanford University law professor Pamela Karlan, in answer to an obviously set-up question from Sheila Jackson Lee, made a snide and extremely lame remark about President Trump’s 13-year-old son. Here’s what she said: “I’ll just give you one example that shows you the difference between him [Trump] and a king, which is, the Constitution says there can be no titles of nobility. So while the President can name his son ‘Barron,’ he can’t make him a baron.” (I assume she thinks “Barron” is spelled with one “r.”) Besides being about as petty as it gets, this remark shows that Prof. Karlan is probably the last person anyone should rely on for a dispassionate reading of the law. The Democrats’ Trump-hate is so irrational, they couldn’t even see how the testimony of such a Trump-hating witness was going to come across to rational human beings.

That was a major theme of the testimony overall, not counting Turley’s: that the President thinks he’s a king or dictator, which is nothing more than partisan opinion unsupported by fact. Sorry to be graphic, but if the President really behaved like an absolute ruler, these three outspoken “political enemies” would likely be stood in front of a firing squad. That’s what dictators do. Ironically, they also love show trials like the one the House is putting on right now.

It came out in the hearing, under questioning by Matt Gaetz, that Karlan is a political activist who has given thousands of dollars to Democrat candidates, including Elizabeth Warren, Barack Obama and Hillary Clinton. That in itself doesn’t disqualify her from testifying as a legal expert, but it’s certainly consistent with the partisanship she displayed in the witness chair. She is such a loon, she actually compared Trump’s (brief) delaying of military aid to Ukraine to cutting off rescue services to Americans after a hurricane. (Gee, wonder what she would think of Obama’s failure to send Ukraine military aid at all?) This person hates Trump so much, she has even said she’s crossed the street to avoid walking in front of one of his hotels. Still, according to Tom Fitton of Judicial Watch, she has been considered by the left to be a contender for a Supreme Court seat. She reportedly was on Hillary’s list of prospects. I am not kidding.

Karlan did apologize, sort of, for her remark about Barron, after Gaetz really let her have it. She said she regretted it and that it was wrong but also that she wished “the President would apologize, obviously, for the things that he’s done that [are] wrong…” (Our own Miss Mannerly would say this is a most ungracious apology but that she is probably not capable of better.)

‘This is Not How You Impeach an American President’

But the good part of the hearing did turn out to be very, very good. What perhaps was the Line Of The Day came from Jonathan Turley: “If you impeach a President, if you make a high crime and misdemeanor out of going to the courts, it is an abuse of power. It’s your abuse of power.” Turley obviously sees through their strategy: accusing the President of the very things they are doing, and he turned it around on them.

Who Does Schiff Think He Is?

Speaking of abuse of power, did you know “The Schiff Report” includes phone records that were subpoenaed from Verizon and AT&T by Adam Schiff? He apparently obtained call records — not content, but who was called and for how long — of Rudy Giuliani, Jay Sekulow, investigative reporter John Solomon (!), Sean Hannity, Devin Nunes, former Nunes staffer Kash Patel, Mike Flynn attorney Victoria Toensing and others, including people at the White House. Who does Schiff think he is, Jim Comey? All the details are here in Wednesday’s piece from Byron York.

The Washington Examiners’ Byron York appeared with Martha MacCallum on Fox News Wednesday night, and he ran through the evolution of charges with which Democrats have considered charging the President. After seeming to settle on “bribery,” in Wednesday’s hearing they united on the notion that the President “abused his power.” York says that’s because “it’s big, it sounds very serious, and it’s really fuzzy.”

I would add that if pressed to be more specific, they’ll cite the fictional account of Trump attempting to get Ukrainian President Zelensky to investigate the Bidens by threatening to withhold military aid, which is asserted in Schiff’s report with absolutely no evidence to back it up. (In fact, Zelensky himself has provided exculpatory evidence, repeatedly.) The three anti-Trump “witnesses” in Wednesday’s hearing did the same thing, speaking of Schiff’s assertions as if they were proven fact.

In contrast, the Republicans, notably ranking member Doug Collins, made a solid case that what’s really driving the Democrats is the fear that Trump will be re-elected in 2020. This is why they’re in a hurry and can’t be bothered with little things like subpoenas and court challenges (which they likely would lose, along with their “obstruction” argument). The strategy: get it done before too many people notice you haven’t produced one bit of actual evidence. As Shakespeare’s Macbeth said, “’twere well it were done quickly.”

It was mostly the speed of the process that Prof. Turley had a problem with — the speed and the overarching anger. I particularly appreciate the way this non-Trump supporter prefaced his opinion: “My personal views of President Trump are as irrelevant to my impeachment testimony as they should be to your impeachment vote.” (Thank you!) Turley said what Congress is doing now is “wrong, because this is not how you impeach an American President.”

And again, thank you, Prof. Turley, for daring to say this.

Another Republican committee member who made me especially proud: Jim Jordan, who powerfully summarized the exculpatory facts that keep being omitted. If there’s a Senate trial, his hard-hitting words should serve as a preview of coming attractions.

To conclude on a glorious note, here’s the magnificent argument made by Mike Johnson of Louisiana. The following must-watch clip will make you proud to be a Republican and give you hope that we can pull out of this political tailspin. We just need some rational adults in charge.