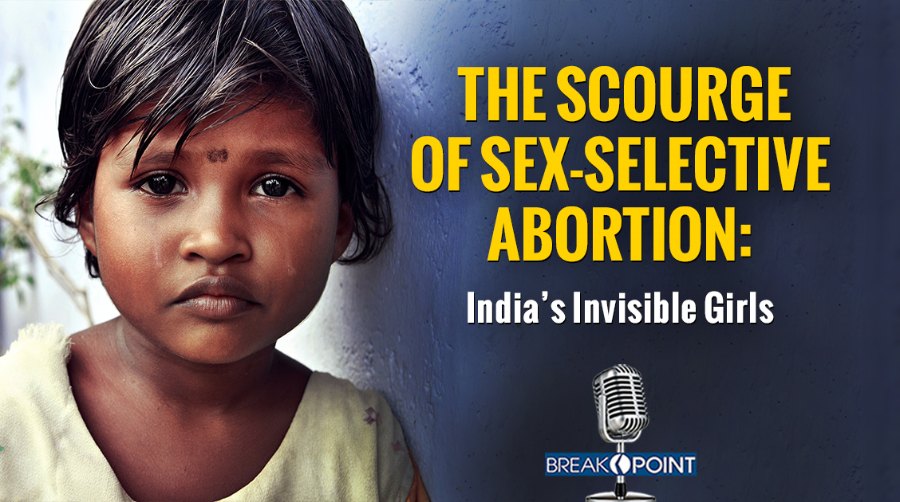 Until recently, Uttarkashi in northern India was noted primarily for its beautiful scenery and Hindu temples. And because it shares a border with Tibet along the foothills of Himalayas, the region attracts many Westerners in search of “spiritual enlightenment.” Its most famous seekers? The Beatles.

Unfortunately, the latest news out of the district has nothing to do with gurus. According to a recent report by al Jazeera, Indian officials discovered that in 132 of the district’s 500 villages, not a single girl was born in the past three months. The last time anything like that happened was in Jurassic Park. Like the movie, this sort of imbalance can only be the result of human manipulation. Unlike the movie, what’s happening in India is real.

One women’s rights activist has rightly called the situation “completely unheard of . . .There must have been some process by which sex determination was done illegally and abortions were carried out.”

The same alarm isn’t shared by everyone. One local magistrate told al Jazeera that the results could be a “coincidence.” Others, such as an India correspondent of the BBC, expressed doubts about the accuracy of the story.

But what cannot be doubted is that the Indian prohibition against sex-selective abortion enacted back in 1994 has been an utter failure. The extent of the disregard for the law is revealed in one irrefutable statistic: In 2001, India had 93 girls for every 100 boys. In 2016, the ratio was 89 girls for every 100 boys. Multiply this out by the millions, and India trails only China in its war against women.

Of course, China’s imbalance is due to its infamous “one-child policy,” which is a government mandate. What’s happening in India is despite the government’s mandate.

McElya recently joined me on the BreakPoint Podcast. When she and her husband lived in India, they took a trip to the countryside. There, her husband saw village after village where boys outnumbered girls by as much as eight-to-one.

When he asked the children in one village about the disparity, they pointed to an older, grandmotherly-type woman and said: “That’s the baby killer. Whenever a baby girl is born in our village, she’s the one who does away with it.”

The “hands-on” way this old woman disposed of unwanted girls is of course shocking, and reminiscent of the gendercide that took place in ancient Rome, where parents would expose unwanted daughters to the elements and wild animals.

The issue of missing girls around the world, which has been highlighted by folks on the right and left, both religious and non-religious, is inseparable from the issue of abortion.

But to be clear, in India today, only a relative handful of the five-to-seven million girls are killed in such an explicit way. Modern technology and abortion-on-demand make gendercide much tidier. A society with a strong preference for male children no longer has to wait until birth to know the unborn child’s sex and to decide whether she shall live.

This is why, as McElya and I discussed, the issue of missing girls around the world, which has been highlighted by folks on the right and left, both religious and non-religious, is inseparable from the issue of abortion. Well-intentioned people like Nicholas Kristoff have championed the cause of the millions of missing girls worldwide, but have refused to touch abortion, the main cause of this devastating reality.

By the way, while India has banned sex-selection abortion, only ten of our United States have such bans, and those are tied up in the courts. Please come to BreakPoint.org to listen to my discussion with Jill McElya of the Invisible Girls Project.

We must pray against these horrible atrocities happening around the world and even in our land. Here in America, we must support bills promoting and protecting the sanctity of every human life. To help combat human trafficking, see Stream parent organization Life Outreach International’s RescueLIFE outreach. Click here to read more and join us in prayer:

Dear Father in Heaven, we raise to you today every woman struggling with an unexpected pregnancy and every woman facing the decision of abortion. We ask you, Lord, to soften the hearts of these women. Draw them under your wing, into the shadow of the Almighty. We ask that you bring them peace and hold their hearts in the palm of your loving and steady hand. Bring them provision and chase off any fear they may face. May their fear turn to faith and their disheartening situation turn to joy.

God, you are not surprised by these situations, but they break your heart nonetheless. Move our hearts with your same compassion. Give us wisdom and guidance to see how we may make a change in our areas of influence. Make us effective salt and light, to present your truth in a way that is gracious, attractive and loving. In Jesus’ great name we ask these things. Amen.