Concerned mother, Stacy Langton, tried to read from the book, Lawn Boy, available to children in Fairfax County school libraries. Board members attempted to shut off her microphone, supposedly because children were present in the audience, though none were visible.

Morse responded: “Talk about hypocrisy. According to board member Karl Frisch, the passages were too salacious to read at a public meeting for fear minors would be exposed to them. But we are supposed to think these books are fine to be in the local high school library?”

Frisch has no children but is reportedly “a gay man who spends much of his energy on the school board focusing on gay and transgender issues rather than education,” The Daily Wire reports. Frisch went on to defend the books and to mock concerned parents on Twitter.

The Young Adult Library Services division of the American Library Association (YALSA) helps determine which books are carried in schools. They recommended Lawn Boy and others like it. “The ALA knows a thing it two about promoting pedophilia,” Morse said, “being a chief proponent of Drag Queen Story Hour.

“It’s good to see concerned parents fighting back. Stacy Langton and others in the audience refused to be silenced. May their tribe increase.

“Public schools are battlefields in the Sexual Revolution’s war on the family. Professional associations like teachers’ unions and the American Library Association are the Revolution’s shock troops.” 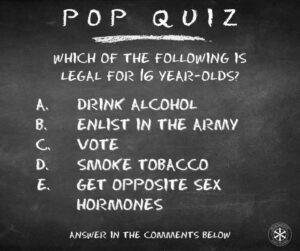 The court reversed a 2020 ruling stating that those under 16 lack the capacity to give informed consent to potentially life-changing drugs, which stop the onset of puberty.

The court, while acknowledging “the difficulties and complexities” of the issue, nevertheless held that “it is for the clinicians to exercise their judgement knowing how important it is that consent [from a minor] is properly obtained according to the individual circumstances.”

Morse called this absurd. “You’re going to rely on a ‘gender-identity’ clinic, which makes money from dispensing these drugs, to assure that consent is properly obtained from a child?”

Morse noted that Keira Bell, the original plaintiff, was given hormone blockers at age 16 after just three one-hour sessions at the Tavistock clinic. She was later prescribed testosterone and had a double mastectomy at 20. Now, at 23, she is in the process of de-transitioning.

Bell said that when she began trying to reverse the process, “it was heartbreaking to realize I’d gone down the wrong path.” The drugs she started taking at 16 “irreparably damaged” her body and likely left her sterile.

No Tattoos, But We Can Sterilize You

“This ruling doesn’t address the fact that the previous court described these so-called gender affirmation treatments as ‘experimental,’” Morse noted. “This court ignored the seriously under-studied, long-term consequences of puberty blockers. If adults don’t fully know what these powerful hormonal interventions do to a young person’s body, how do we expect someone under age 16 to know?

“You can’t drive, vote, or enlist in the military in the United Kingdom when you’re under 16. But, according to ‘trans’ activists, minors have the maturity and discernment to take drugs that could radically alter their body chemistry in preparation for chemical castration and surgical alteration. Something is clearly wrong here.”

In honor of October being breast cancer awareness month, the Ruth Institute’s first Dr. J Show guest this month is Dr. Joel Brind, Professor of Biology and Endocrinology at Baruch College of the City University of New York. A medical research biochemist since 1981, Dr. Brind has proven a connection between abortion and breast cancer.

Though ostracized by his colleagues and persecuted by the National Cancer Institute, he persisted in telling the truth about the “ABC link.” Along with Dr. Angela Lanfranchi, he co-founded the Breast Cancer Prevention Institute. (See also Dr. Lanfranchi’s Dr. J Show interview.)

Dr. Brind explains in simple terms why abortion increases your risk of breast cancer, and how, the more abortions you have, the greater your risk. Learn why this reality is not widely known, and be sure to check the show notes for more helpful information.

In this video from the Ruth Institute’s recent Summit for Survivors of the Sexual Revolution, Dr. Donna Harrison of the American Association of Pro-life OB/GYNs, explains the deterioration of ethics among physicians. She shares how current legal and professional pressures force physicians to violate their consciences. The Virtue Ethic (doing the right thing according to the Hippocratic Oath) has largely been replaced by the Hedonistic Ethic (happiness and pleasure as the highest goal). Now doctors must do what the patient asks, whether or not it is truly in the patient’s best interest, or what state-controlled health care systems mandate. In which case, medical ethics becomes whatever the state wants.

Dr. Harrison also explains the history of eugenics and how we’ve gotten to the point where, in state-controlled utilitarian systems, patients whose lives do not increase the net happiness of society (the handicapped, elderly, unwanted) are subject to elimination. “Legalization of abortion and euthanasia requires modification/elimination of the Hippocratic Oath as the foundation of medical ethics.” Watch the 15-minute video.