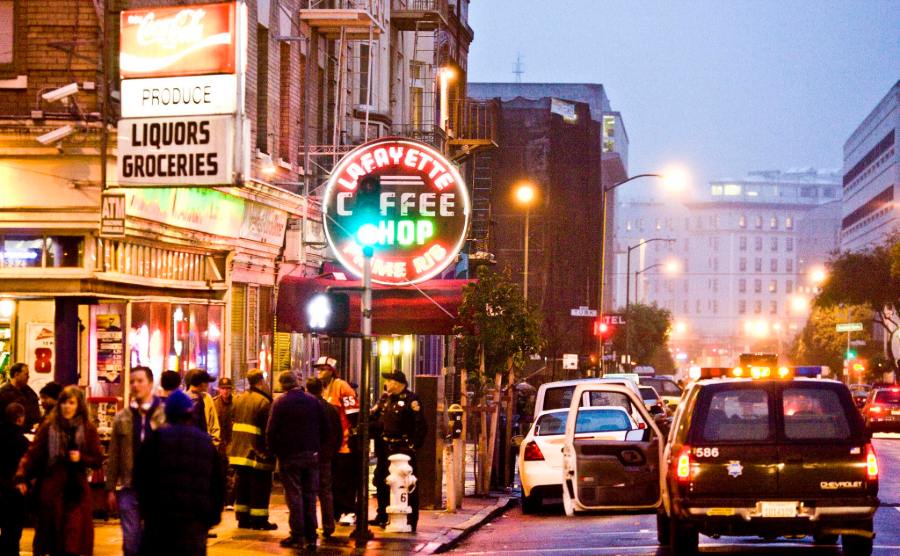 A shot of life in the Tenderloin district of San Francisco, Calif.

The Tenderloin is a triangular neighborhood located a few blocks from San Francisco’s City Hall. It is also San Francisco’s most notorious drug district, according to authorities, Vice reported in 2014.

It is one of the most dangerous districts in the city, authorities say.

Hyde Street’s 300 block is regarded as the city’s grossest block. Human waste lying in the streets is a norm, reported The New York Times in October. The block is part of San Francisco’s Tenderloin neighborhood.

The district was created in order to create a “safe space” for transgender persons and to aid those who identify as transgender being pushed out of their own neighborhoods, according to Compton’s district manager, Honey Mahogany, the Beast reported.

The district will also teach San Franciscans about the history of transgender evolution, Mahogany said, according to the Beast.

“The Tenderloin has always held a really special place in my heart as a trans person with the way the community is accepting of gender variant and trans people of color,” Mahogany said, the Beast reported.

The district received $215,000 from the city after Proposition E passed in November, allocating 1.5 percent of the city’s base hotel tax to cultural and art purposes, according to Ballotpedia. The legislation was first introduced by district Supervisor Jane Kim in June 2017, according to the Beast.

“The first transgender commemorative neighborhood in the nation’s history is well timed given the president’s attack on transgender people,” Kim said.

Daughter of a Baptist minister in San Jose, California, Donna Personna, also applauded the new district. “It’s an act of resistance and of fighting back,” she said, according to the Beast.

“I’m proud and happy with myself that we did something tangible against the Trump administration,” Personna said.

San Francisco Mayor London Breed, a Democrat, did not immediately respond to The Daily Caller New Foundation’s request for comment.