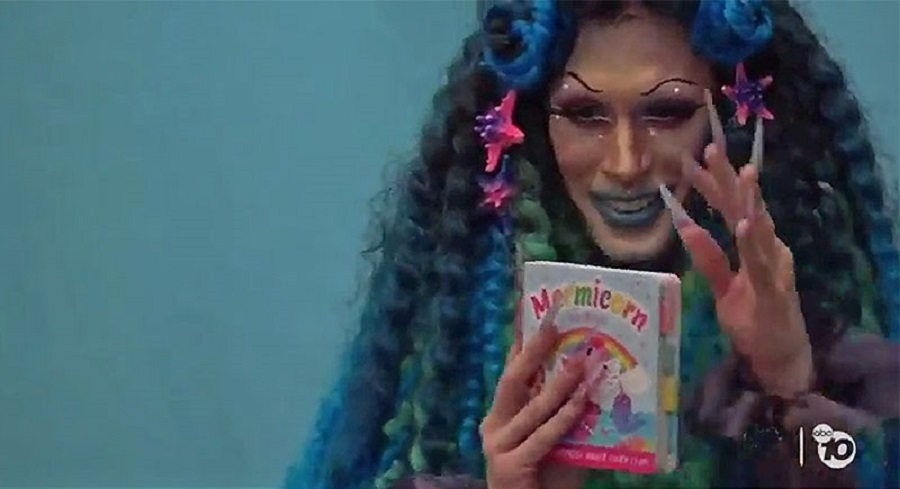 This "Drag Queen" reading to children at a San Diego Public Library event was even featured on the local TV news.

When you watch your tax dollars being used for deviant repulsive acts in your town, it makes you want to get up and do something. Especially if it’s happening in a local library that’s supposed to be a safe place for children — not a dangerous place with perverted, dysfunctional adults running the children’s programs.

When the COVID shutdowns eased up in June, the San Diego public library system began a super-charged “LGBT Pride Month” promotion lasting over June and July, including homosexual-themed library cards. A main feature was a series of “Drag Queen Story Hour” events for young children — led by creepy cross-dressing men — that performed in all the branch libraries in the city. 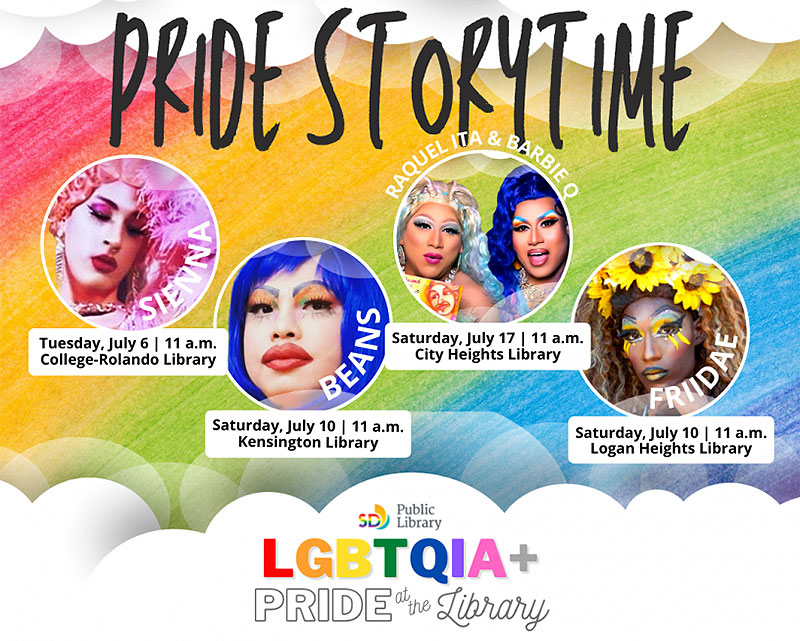 Everyone knew this wasn’t universally supported. The local CBS-TV’s news report also included clips from the 2019 MassResistance protests outside a “Drag Queen” event at the library in Chula Vista, a nearby San Diego suburb. 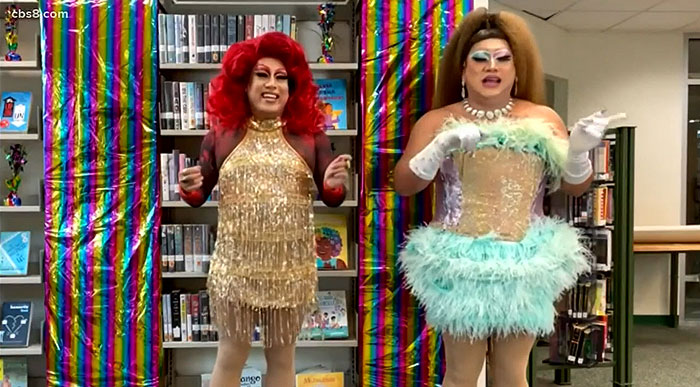 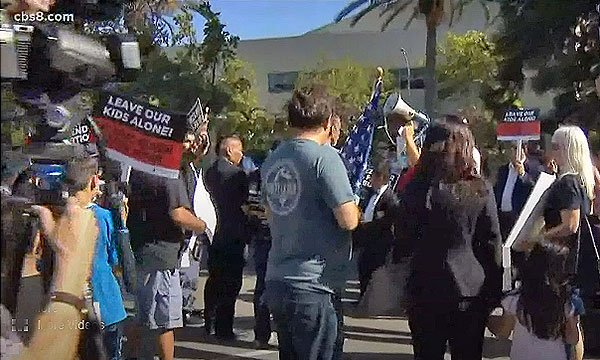 … and also showed a scene from a nearby MassResistance protest a few years ago.

So on July 20, 2021, when the “Drag Queen” event got to San Diego’s City Heights Library branch, some local San Diego MassResistance activists decided to take a stand. If members of the community didn’t do anything at all, how would that look? 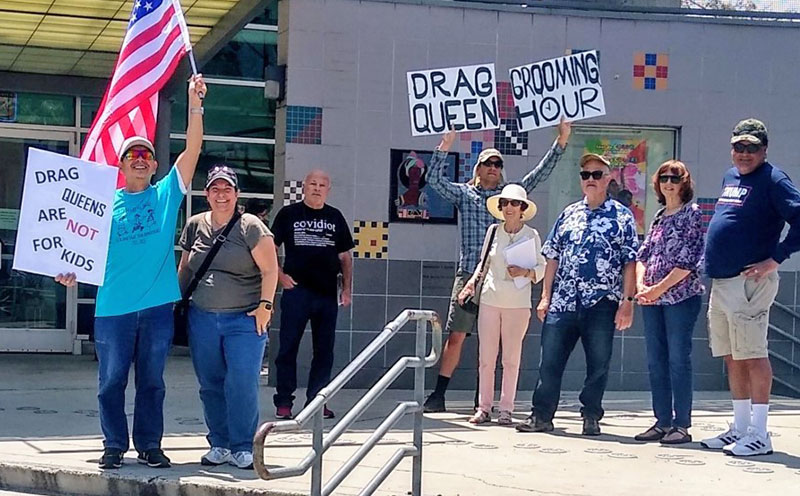 Outside the City Heights Library in San Diego we made some noise and protested!

While the rest of the group protested just outside the front doors, one of them, Marilyn, walked in.

She was met by a library staffer and a security guard, who recognized her as one of the protesters and said, “We don’t want you to distract the other patrons.” Marilyn answered in a firm but calm voice: “What about the children who are being affected by all of this?” 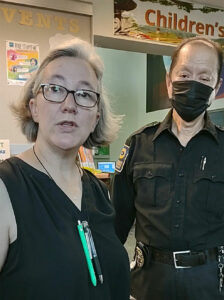 A large man wearing a dress walked up and said, “We’re asking you to leave.” Marilyn said: “You need to quit doing this. You need to stop holding these things.”

The library staffer cut her off and said, “I’m going to call the police right now!” Marilyn answered, “Go right ahead. We’ve talked to them before. That’s fine.” The staffer said, “Let’s just wait outside then while they come.” Marilyn decided to walk out with her. (The police were not called.)

While they were walking out, the staffer said to Marilyn, “I appreciate how much you care about the children.”

Marilyn answered, “Well, you don’t care about the children because you are allowing these events to take place and you’re subjecting them to sexually perverse lifestyles that are destroying their innocence.”

When they got outside Marilyn continued: “So how much do you care about the children — all of you who are aiding and abetting this?” she asked.

The staffer responded, “I’m not going to answer that question.”

Marilyn retorted “Of course you’re not because you’re complicit in destroying children’s innocence by exposing them to sexual deviancy, here in our public libraries, paid for with our tax dollars. And [pointing to the guards] you security guards are also complicit in it. How can you sleep at night?” 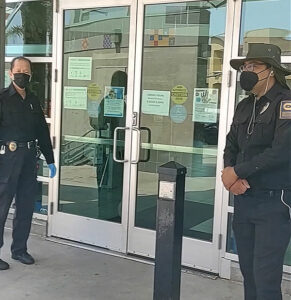 The library staffer stationed two guards at the front door to make sure no normal people got in!

Outside, two guards stood at the library doors. Some other library staffers were there to pass out an LGBT packet (produced by the library) for the children as they came out the door when the event ended. Marilyn continued to admonish them. None of them would respond. But they clearly got the message!

A Reaction From the Drag Queen Event Inside!

While the protests were going on outside, a friend of one of our San Diego MassResistance activists — who had not been aware of “Drag Queen Story Hour” events before this — decided to go in and watch it.

Here is what she told us afterward:

When I first learned about this, I couldn’t believe anyone would knowingly bring their children to see and be read to by a person dressed in drag. It was so unbelievable to me, I simply had to see it with my own two eyes.

On July 17, 2021, I arrived at the library just before it started and went right in. It was held in the library’s courtyard. I happened to talk to what appeared to be a large, odd-looking man wearing a blue dress and deep red lipstick. He was obviously an organizer, setting up chairs, etc. He told me that this is “Pride Story Time” and the performer will arrive shortly. 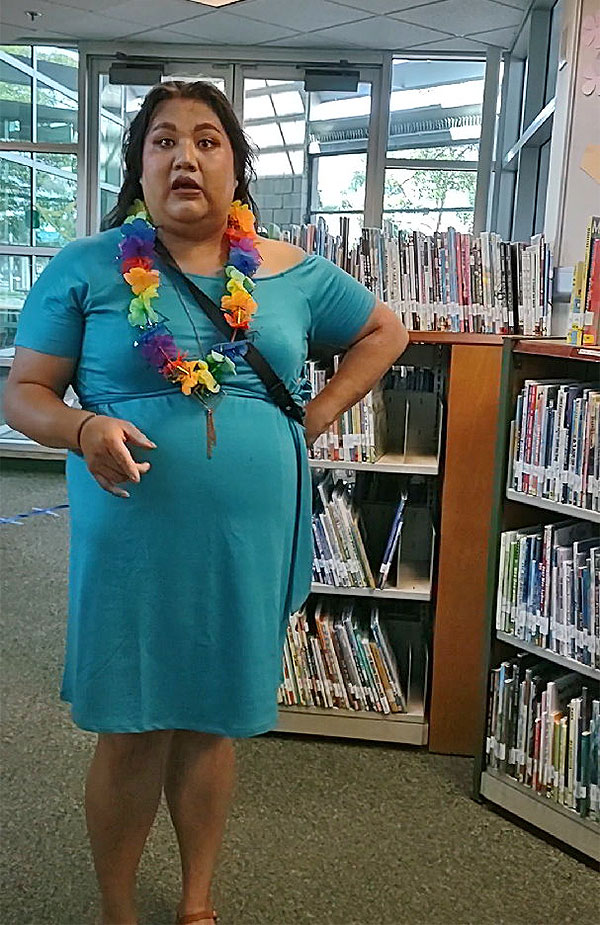 The man in the blue dress. The deep voice definitely gave it away.

There were approximately 20-30 people in the audience. Most were same-sex couples, and most, but not all, were with very young children.

Among the last people to arrive was a middle-aged blond woman with two older children, perhaps late elementary-school or early middle-school aged. As she passed by me, she said to the kids accompanying her, “Isn’t this exciting? This is going to be great!” The kids didn’t reply. They didn’t appear to be as interested in the event as she clearly was.

The man in the blue dress then escorted the performer into the courtyard and on to the stage area. I could hardly believe my eyes. What I saw was a very tall, thin, black man wearing a woman’s style long-haired black wig, heavy garish make-up, a tight-fitting bathing suit-like pair of bottoms and a flamboyant, sequined, peacock dress. I’ve never seen anything as hideous as this in real life, only in movies. As he walked in, the audience cheered loudly. 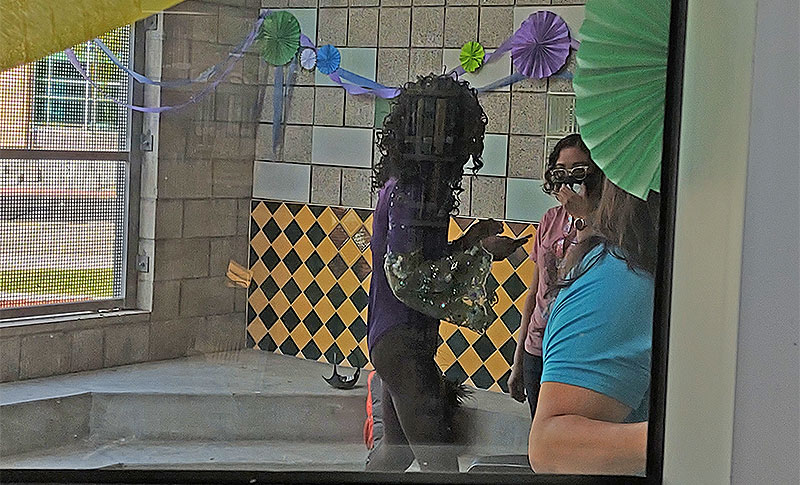 Marilyn got this shot of the “Drag Queen” in his thong-style underwear, just before he put on his peacock-style dress and cape with flowing skirt pieces.

He turned on some loud dance music and proceeded to do a dance more appropriate for a night club. He motioned for the audience to clap in time with the music. At one point, he kneeled on the floor while leaning back with his head and body. He then thrust his hips in time with the music while the audience clapped and cheered. I found it pretty disgusting and totally inappropriate for young children, yet the adults and children in the audience were cheering and clapping.

After dancing, he sat in a chair and read some children’s books aloud. Rather than overtly “homosexual” or “transgender,” the books all seemed to have a subliminal LGBT message for the children to absorb. For example, the second book he read A Quokka Life: Love Makes a Family, teaches young children about surrogate parenting — a necessary situation among homosexuals. Is that a good topic for very young children? The activists don’t care about that.

While the last book was still being read, the manager of the library walked by me and we talked for a bit. She explained how they are proud to host events like this in support of PRIDE for the surrounding communities, and she didn’t understand or appreciate the protest going on outside. She added that this type of event rotates between various libraries in San Diego.

After the performer finished reading the last book, the event proceeded to photo opportunities for members of the audience (including the little children) with the performer. Many photographs were taken and the audience slowly dispersed. 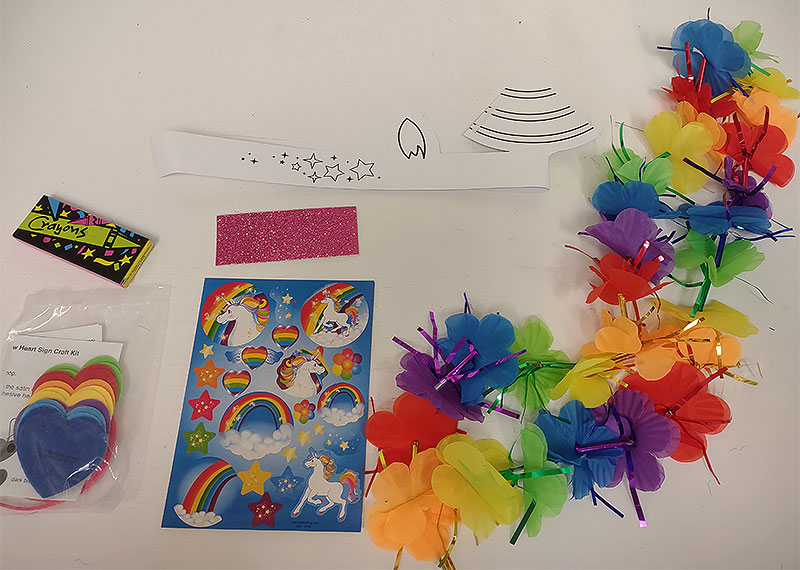 This is the LGBTQ kit handed out to the children after the Drag Queen show. The insert said, “This kit was created with love by library staff, we hope you enjoy your PRIDE activities.” In other words, more tax dollars at work against you. 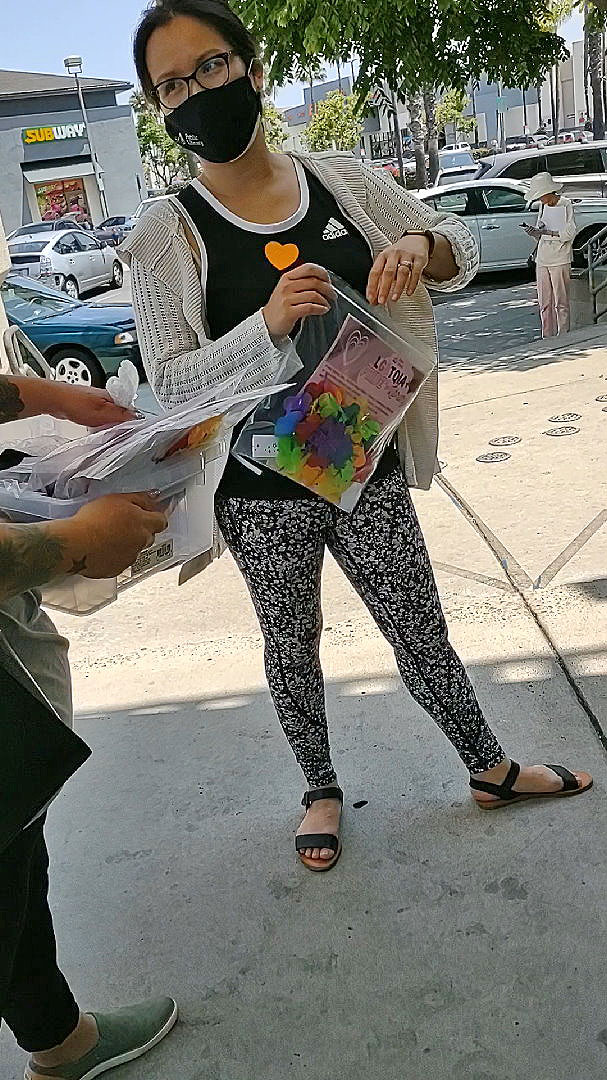 Preparing to hand out the kits outside the library.

Since then, the image of this ghastly man, his sexualized dancing, and then reading children’s books to children keeps coming back to me. It’s immensely disturbing. And my tax dollars were paying for it. 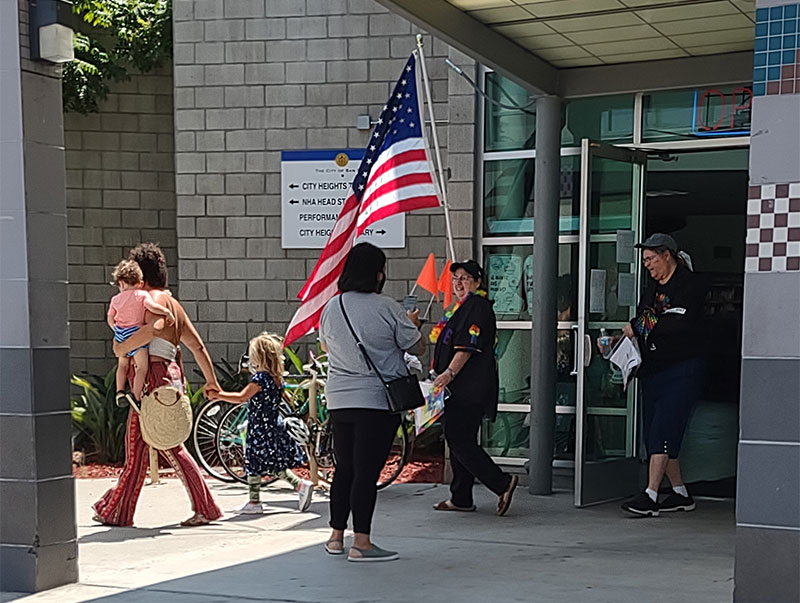 … And handing them out as the audience leaves.

Even though we didn’t “stop” this one, it’s very important that the people running these programs be directly confronted by community members. As the promotional news reports show, they are not only comfortable with it, they’re enthusiastic about it. They have no interest in the destructive effects this has on children. (And as we’ve seen across the country, the local authorities rarely find anything wrong with this, either.)

But a dose of cold water — especially given in a calm but very firm manner — has an interesting psychological effect. On a certain level, it almost always jars them. They’re used to living in a bubble where everyone talks and thinks the same way. We come and break that bubble!

And moreover, promoting deviancy and the early sexualization of a minor child is abuse. All the pro-family warnings about so-called “LGBT parenting” are being substantiated by programs like this.