Sadness and Politics Over the Weekend 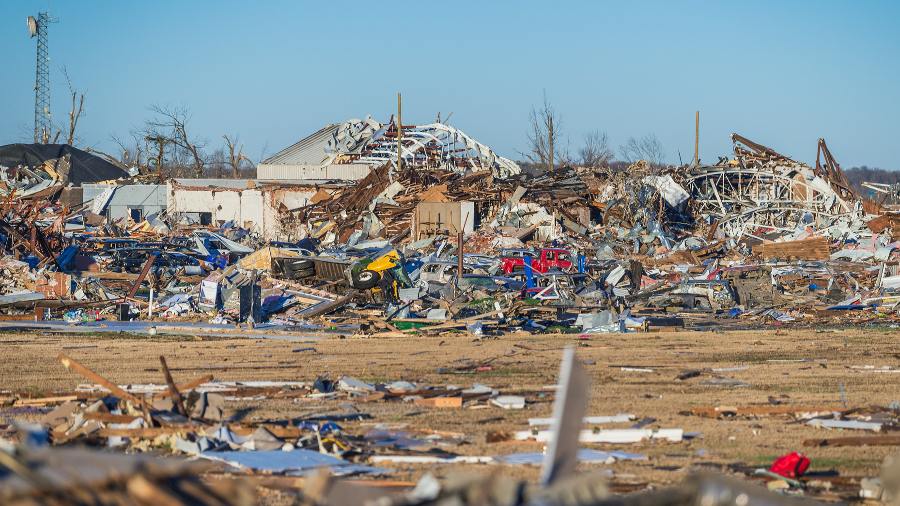 The toll of death and destruction from this weekend’s outbreak of Midwest tornadoes continues to mount. Among the hardest hit was the town of Mayfield, Kentucky, where aerial photos of the devastation make it look as if it were hit by an atomic bomb. This link has more details and photos, but I warn you that it’s heartbreaking to look at.

Gov. Andy Beshear said that initial fears that the state’s death toll could top 100 may prove incorrect, as many people who were thought killed in the collapse of a candle factory were rescued. Still, Kentucky’s deaths may top 50, and 14 more are known dead in other states. I hope you will join me in praying for the victims and in donating to Samaritan’s Purse, which is already rushing to help those affected. They also need volunteers, so if you can help in any way, please go to www.samaritanspurse.org to give and for more information.

Unfortunately, in these times when human decency is at a low ebb, some people quickly tried to use this unspeakable tragedy to advance their political agendas. President Biden suggested that “climate change” was to blame for the tornadoes, although he admitted, “I can’t give you a quantitative read on that.”

Unfortunately, in these times when human decency is at a low ebb, some people quickly tried to use this unspeakable tragedy to advance their political agendas.

His FEMA director Deanne Criswell was not so cautious and dived headfirst into global warming panic mongering by declaring on CNN, “This is going to be our new normal. The effects we are seeing of climate change are the crisis of our generation.”

And some went disgustingly political, using the suffering of victims in Kentucky to attack their political opponents. Like Rep. Eric Swalwell and various low-tier Hollywood and media figures, who took to the ignorance-displaying platform of Twitter to blame Kentucky voters and Sens. Rand Paul and Mitch McConnell for blocking the Democrats’ multi-trillion dollar spending bills to fight “climate change.” Because the Midwest never had tornadoes before (wasn’t “The Wizard of Oz” filmed in 1939, based on a book written in 1900?), and only by passing massive spending bills can the government finally control the weather.

What’s the Truth — According to Actual Weather Scientists?

As for whether it’s true that tornadoes are related to a changing climate, Rebecca Downs at Townhall.com looked up what actual weather scientists have to say, and the correct answer is, “Nobody knows for certain.”

There’s evidence that tornadoes have gotten stronger in recent years, and there have been more of them occurring in “clusters” of multiple tornadoes. But there are no studies linking that to climate change, we don’t know if that trend will continue, and there has been no increase in the number of strong tornadoes over the past few decades, just more of them striking at once, leaving fewer on the other days of tornado season.

Also, the Center for Climate and Energy Solutions notes that it’s hard to gauge long-term trends because tornado records rely on subjective eyewitness accounts and have only been kept since the 1950s. There are more records now for the same reason there’s more damage: population growth and development have put more people and buildings into the paths of tornadoes. This is also an often-overlooked factor when people claim that hurricanes are becoming costlier and more destructive: are the storms really more powerful and frequent, or are our coastlines just much more crowded and developed than they were decades ago?

These are all questions that require deep thought, objective scientific study, and serious debate. Unfortunately, it’s a lot easier to blame bad weather on your political opponents.

REPORT: Government/Banks to Use ‘Climate Crisis’ for Financial Control