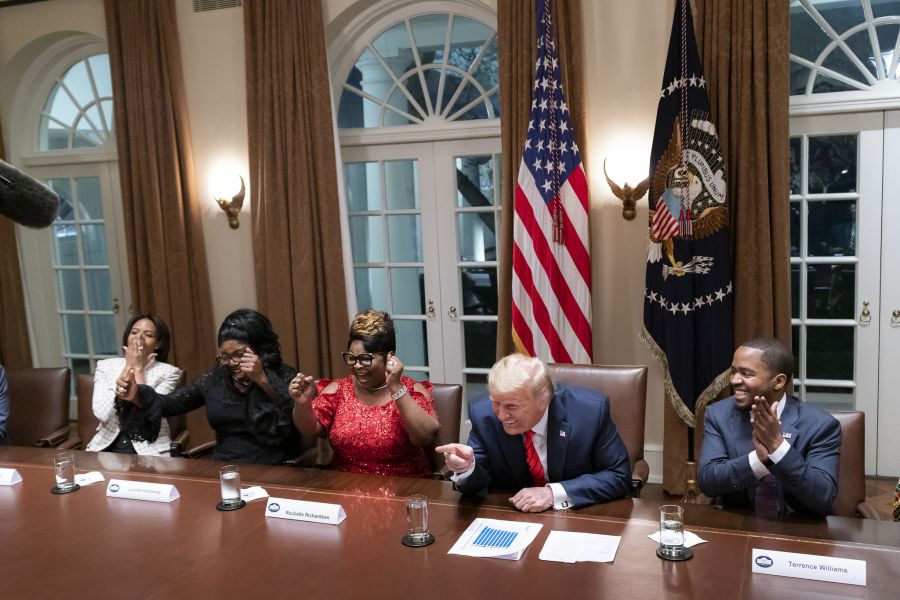 A moment of levity. President Donald J. Trump meets a with African American Leaders Thursday, Feb. 27, 2020, in the Cabinet Room of the White House.

This week, President Trump took to Twitter to express his displeasure and frustration with Democratic leaders who seem more concerned with blaming him for the coronavirus and hyping up a panic than in doing anything to help. He noted that while he was working to prepare for the virus, they were tying up Congress with their fruitless impeachment crusade.

Not to add to the panic, but there already is a terrible epidemic disease ravaging America. In the worst cases, it results in hysteria, loss of brain function and inability to control one’s mouth. That disease is TDS (Trump Derangement Syndrome.)

It’s primarily spread via airborne means, such as 24-hour TV news channels, and chiefly affects Democratic politicians and their unpaid press agents in the media. A particularly virulent strain started in China and is now reaching peak infection. You can see the symptoms on full display in the reactions to President Trump’s press conference on the coronavirus, where he introduced some top health experts who are leading the effort.

Also, to show how seriously he’s taking this, he announced that Vice President Pence will head up a White House task force to coordinate the efforts of multiple agencies. This is important because a number of agencies will be involved and having someone with the Vice President’s clout in charge will help eliminate red tape and bureaucratic turf conflicts.

To a person with a normal, healthy brain, that should all have been reassuring. But here’s what TDS sufferers heard:

“WE’RE ALL GOING TO DIE, AND IT’S ALL TRUMP’S FAULT!” As Trump might say: Sad!

If you think I’m exaggerating their exaggerations, you must not have been near a TV in the past couple of days. I’ve seen networks such as CNN and MSNBC trot out furrow-browed “experts” to tell us that the government is totally unprepared, that Pence hates science, that Trump slashed funding for the CDC and the NIH so there’s nobody left there who knows anything about how to deal with this. Oh, and Trump is a lying liar who lies so it’s better to listen to China and hysterical rumors than the disease stats and info the White House is giving us.

Speaking of lying liars, two leading Democratic Presidential candidates, Joe Biden and Mike Bloomberg, both made such egregiously false claims about Trump gutting the CDC and NIH budgets that even the A.P. couldn’t let them slip past. Here’s their fact-check, and for once, it’s a legitimate checking of facts:

In short: no, neither agency’s budgets have been cut. There was a reduction in CDC grants to state and local governments, but that was in place before Trump took office. And there are numerous top health experts involved who have extensive experience dealing with previous epidemics, including CDC deputy director Dr. Ann Schuchat and NIH infectious disease chief Dr. Anthony Fauci, who’s advised six Presidents.

If President Trump flew around the world like Superman, sucked the virus out of every patient’s lungs, then dived to the bottom of the Pacific to get rid of it, he’d return home to find the Democrats and media accusing him of polluting the ocean.

But some candidates have even more advanced case of TDS that have rendered rational thought impossible. Sen. Elizabeth Warren, who actually thinks she should be in charge of national health emergencies, quickly introduced a “Prioritizing Pandemic Prevention Act” that would transfer the $10 billion Trump allocated for his “racist” border wall to the CDC to prevent pandemics. This sparked Ted Cruz and others with clearer heads to ask how you prevent people from bringing foreign diseases into the US by doing away with border security.

Bernie Sanders, who can find something good to say about any murderous communist dictator but thinks America is a cesspool of racism and xenophobia, accused Pence of intending to do nothing but try to “pray away” the coronavirus. Because he’s a devout Christian, and we all know what THOSE people are like, amiright?

A reminder to Bernie and all the others who are attacking and second-guessing Pence’s record as Governor of Indiana: he actually was a Governor, managing a huge Health and Human Services organization with an annual budget of around $14 billion. Bernie Sanders was the mayor of Burlington, Vermont, before becoming one of 100 Senators and sponsoring seven bills in 13 years that have passed, two of them to rename post offices and one to declare March 4, 1991, as Vermont Bicentennial Day.

Some of the deranged media responses include worries that the coronavirus might make Americans exhibit xenophobia against the Chinese and a New York Times article suggesting that the disease be named after Trump (I guess they think he’s responsible for the San Francisco-level public hygiene in parts of China.) And don’t even get me started on this terminal TDS case:

All of this is helping drive down the stock market. Sadly, I think that harming the market and the economy so they can blame Trump and hurt his reelection chances is a big motivator behind all this panic-mongering.

I wish I didn’t have to suspect that the left could be so deranged that they would sacrifice Americans’ jobs and security just to gain a political advantage, but I still remember Bill Maher publicly wishing for a recession just to harm Trump at the polls.

My advice would be to tune out all the hysteria and partisan finger-pointing and just listen to people who really know what they’re talking about, like actual doctors. They recommend following precautions similar to what you do when it’s flu season:

Wash your hands frequently; stay away from people who are coughing or sneezing; don’t go to work if you’re sick; use surface disinfectants such as Lysol or Clorox, especially in public places like airplanes; and seek medical care immediately if you have a cough, fever or trouble breathing.

Fortunately, we don’t have socialized medicine (yet!), so you should be able to see a doctor immediately. Surgical masks likely will do no good, unless you already have it, then they might keep you from spreading it.

Here’s more on that subject, from Dr. Marc Siegel and the World Health Organization:

Also important, don’t fall victim to TDS by listening to its fervent spreaders. As I said the other night on Fox News, if President Trump flew around the world like Superman, sucked the virus out of every patient’s lungs, then dived to the bottom of the Pacific to get rid of it, he’d return home to find the Democrats and media accusing him of polluting the ocean.