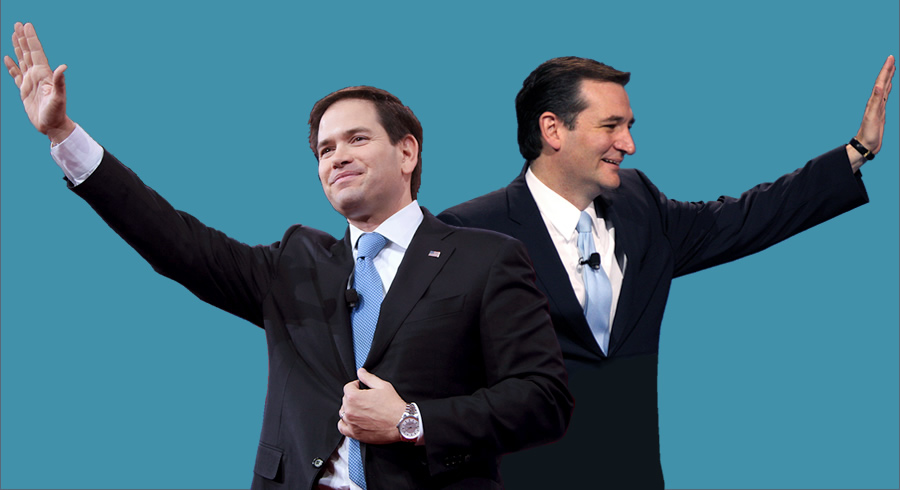 As things stand, Donald Trump is the presumptive GOP nominee. That’s awful news, and depressing to contemplate. But terrible possibilities don’t become less terrible if we refuse to contemplate them. Rather, they become more likely.

The GOP’s collective desire to look away has been a problem for months. Nearly everyone, including yours truly, believed that Trump’s candidacy would exhaust itself on its own terms. There are many reasons why that hasn’t happened. Chief among them: Too many people thought it was someone else’s job to bell the Trumpian cat. No better evidence for this can be found than the fact that of the $215 million spent by super PACs so far this cycle, only 4 percent was spent attacking Trump, according to the Washington Post.

While a queue for allotments of blame would be longer than a Great Depression breadline, the person at the head of it is Ted Cruz. For months, Cruz embraced Trump as a comrade-in-arms. This helped send the signal to talk radio hosts and various conservative activists that Trump was as a healthy addition to the political conversation. Even though the two men are wildly divergent ideologically, they both found shelter under the “anti-establishment” umbrella.

Cruz finally broke the clinch in Iowa and demonstrated that negative attacks on Trump work.

But then, disastrously, Cruz stopped attacking. He wrongly reasoned that he had no chance in New Hampshire and had little to gain, so why bother fighting Trump there? For the entire crucial week leading up to the New Hampshire primary, the GOP field went back into a cannibalistic frenzy to win the non-Trump mantle. This allowed Trump to run up a huge victory in the Granite State, and that momentum let him gobble up Cruz’s evangelical base in South Carolina (where 73 percent of voters describe themselves as evangelical or born-again), resulting in a strategically devastating third-place finish that shattered Cruz’s claim to be the standard-bearer of true conservatism.

The morals of this story so far should be familiar. First, you can’t count on politicians to look beyond their immediate tactical self-interest. Second, rumors of the so-called establishment’s power — or even existence — are greatly exaggerated. Waiting for “the establishment” to save the party from Trump’s hostile takeover is like waiting for Godot to bring the beer to the party.

Marco Rubio is now the only plausible alternative to Trump. But it’s unclear whether he’s taken either of these lessons to heart. According to his campaign’s post-South Carolina strategy memo, he thinks he can wait until after Super Tuesday to post a win in any state. Rubio assumes first-place finishes will ultimately come his way because the field will be clear. Will it? Jeb Bush is finally out, but Ben Carson seems to be running one of the most ingeniously disguised book tours in modern memory. John Kasich is hunting windmills in Ohio and Michigan, in the apparent hope that he can parlay such victories into being Trump’s running mate. And Cruz is unlikely to stop running for president because that’s all he knows how to do.

Rubio’s strategy isn’t crazy, just implausible. If he’s hoping the “establishment” can rescue him, or that attacking everyone but Trump is the route to victory, he should take a moment to review how the primaries became such a raging garbage fire in the first place.

If the two factions — which make up the overwhelming majority of Republican voters — could be unified, it might be enough to stop Trump.

What would the deal look like? A Rubio-Cruz ticket. Cruz won’t work at the top of the ticket for the simple reason that too many GOP quislings fear Cruz more than Trump. But a unity ticket — a la Reagan-Bush in 1980 — in the form of Los Hermanos Cubanos might just do the trick. There are real costs to such a deal (not least the fact that there are better general-election running mates for Rubio).

Maybe there’s another way, but I haven’t heard it. And in a race where Trump has changed everything with his boldness, it’s long past time for his opponents to provide some of their own.

Jonah Goldberg is a fellow at the American Enterprise Institute and a senior editor of National Review. You can write to him in care of this newspaper or by e-mail at goldbergcolumn@gmail.com, or via Twitter @JonahNRO.