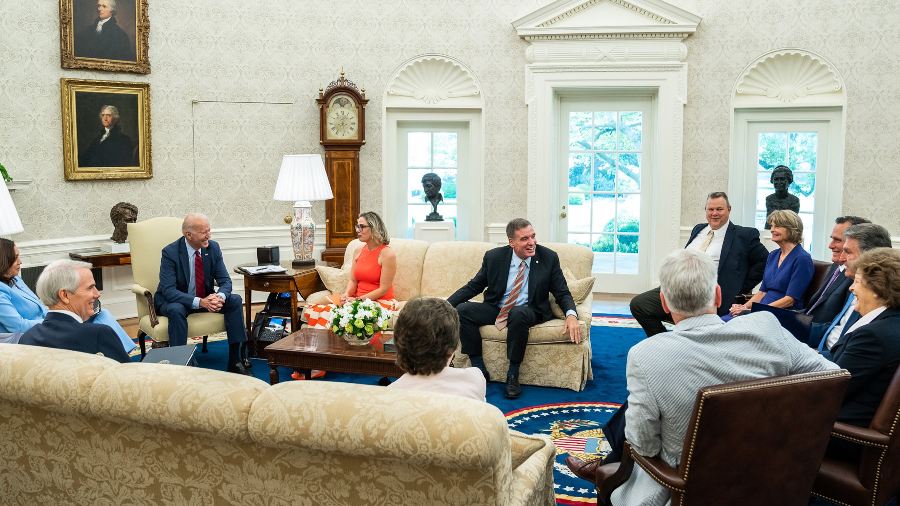 Seventeen Senate Republicans seem determined to save Joe Biden from his disastrous policies by backing Chuck Schumer’s infrastructure bill, which will reduce the GOP’s ability to go after the inflation caused by Democrats’ runaway spending when it hits ordinary Americans’ weekly budgets as it is sure to do.

Biden’s poll numbers are in a freefall. He has no natural constituency like Barack Obama had among Democrats and Donald Trump had among Republicans. So when he can’t deliver results, his numbers collapse — now under 50 percent in some polls.

This is because bad policy is often bad politics. Biden’s tax-and-spend policies have not produced results, and millions of Americans who voted for Biden last year are seeing it.

What’s more, inflation is now rearing its ugly head on a scale not seen for decades. And polls show that Americans are increasingly understanding that runaway government spending fuels inflation, which is a cruel tax on senior citizens, racial minorities, and low-income Americans because it increases the cost they pay every day at the gas pump and the grocery store by eroding the purchasing power of their dollars.

You would think that in that environment, Biden’s far-left party’s single-minded philosophy that taxing and spending are the solution to our every problem — versus actually being our problem — would doom their prospects to run through trillion-dollar spending in an evenly divided Congress. But you’d be wrong.

Seventeen Republicans are joining every Senate Democrat to advance a $1.2 trillion-dollar bill on what they say is “infrastructure,” adding over $250 billion to the national debt. They’re hailing it as bipartisan.

Millions of Americans don’t vote on budget deficits or the national debt, as it seems very abstract and far-off to talk about interest payments your grandchildren must pay. But they do vote based on how much it costs to fill up their tank, or buy eggs and milk. They’re mad and getting madder, and they’re going to look for people to hold accountable in 2022 and 2024. That will be the legacy of this disastrous legislation.

Discrimination Based on Race — in the Name of “Equity”

One aspect of this bill that’s nothing short of sad is that it hands Democrats a couple of ideas from the Liberal Left Wish List, an embarrassing display of people who will give away the store in a single-minded pursuit of a wrongheaded idea.

This bill included racial discrimination, giving preferential treatment to some — but not all — people of color. Evidently, some colors are more equal than others. We fought a war and amended the Constitution three times so that government would not treat people differently because of the color of their skin. Abraham Lincoln led his Republican Party to emancipate the slaves and worked tirelessly to secure enough Democrats to pass the Republican-led Thirteenth Amendment to end the scourge of slavery.

Now the Party of Lincoln is authorizing discrimination based on race, all in the name of “equity” (which few people can define, but it sounds so fancy and respectable). A part of the infrastructure bill called the Digital Equity Act gives special treatment to “covered populations” including racial minority groups. Another gives special treatment to “socially disadvantaged” groups, which includes some racial minorities, but not others.

Lawsuits across the country have scored swift victories striking down these racial preferences as unconstitutional, but until now those have been Republican legal victories against Democrat legislation. These provisions should suffer the same legal fate, but Republicans will bear the shame of having voted to violate their oath of office “to support and defend the Constitution of the United States.”

Speaking about race and violating constitutional rights, this bill gives transgender individuals protected status in American law, equating it to protecting people against racial discrimination. (That’s on page 2,149, for anyone who wants to try to deny it.) Now this group of Republicans is taking what was until recently a marginal social issue — one that impacts only a fraction of one percent of American adults and forces people and organizations (including religious organizations) to say things they do not believe and do things forbidden by their religious faith — and mortgaging the noble history of the racial civil rights movement to violate those constitutional rights as well.

Some of these senators are going to earn themselves primary challenges off this. They weren’t elected to advance a Democrat agenda that hurts average Americans.

The official reason some Republicans give is that the Democrats would just push through an even worse bill on a 50-50 party-line Senate vote with Kamala Harris breaking the tie. Well if that’s true — maybe it is, maybe it isn’t — then that’s what they should let happen so that Americans know who to blame.

The reality is that some Republicans are using this to bring home the bacon. Sen. Lisa Murkowski (R-AK) is bringing home 75 million dollars to Alaska’s Denali Commission. Sen. Bill Cassidy (R-LA) is bringing home millions for the Delta Regional Authority and other state projects. It’s easy to make friends by spending the money of other people’s grandchildren.

Another reality is that some Republican senators are doing this to show up Donald Trump. Internecine warfare — including from some staffers in the former president’s White House and congressional Republicans — kept an infrastructure plan from coming together a few years ago. Now some of those Republicans are trying to show that they can achieve results that Trump did not, even if it means supporting a disgraceful bill. Grumbling on the Hill is that this is a motivation for Sen. Mitt Romney (R-UT).

Politics At Its Worst

A very-beatable Obama ended up with a second term in the White House, where he caused immense damage. The lesson is that you need to present a clear contrast to voters if you want to win.

Back to 2021, this is politics at its worst. America needs infrastructure. But if Republicans stand on principle, draw a clear contrast, and scuttle this boondoggle, then Biden would have little choice but to sign a Republican-written infrastructure bill in 2023 that reflects conservative priorities.

An inflation bomb has already gone off in America with mounting fallout every month, and right now Americans know who to blame. This infrastructure bill will be a second bomb, one where blame doesn’t clearly fall on the party in power.

Ken Blackwell is the Distinguished Fellow for Human Rights and Constitutional Governance at the Family Research Council, and Chairman of the Center for Election Integrity at America First Policy Institute.