Why Has GOP Not Replace Obamacare Yet? Because They are Big-Government Party Too 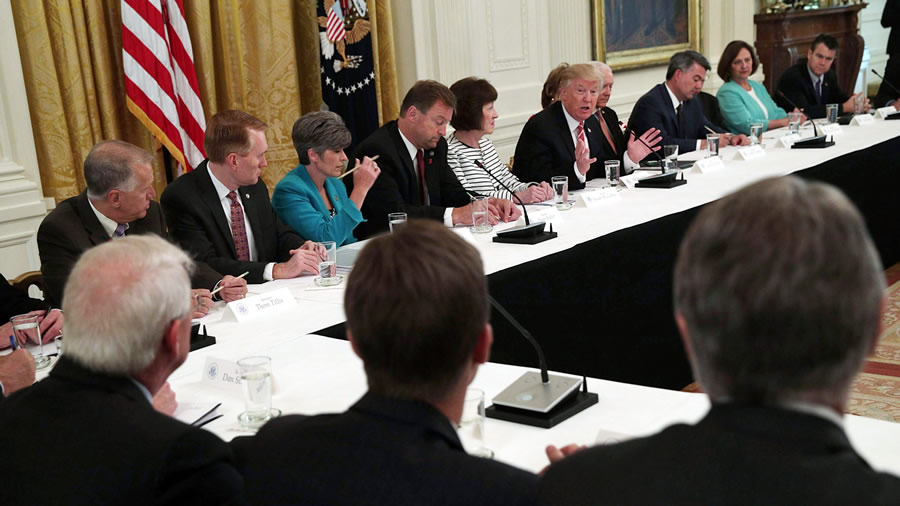 In this June 27, 2017, file photo, U.S. President Donald Trump speaks during a meeting with Senate Republicans at the East Room of the White House in Washington, D.C. President Trump invited all GOP Senate members to the White House to discuss the Health Care bill.

We now have the answer to a question that has hung in the air for months: Why did the Republican leadership not have an Obamacare repeal-and-replace plan on the shelf and ready to go the minute the election went their way? Why didn’t they use the time since the law’s 2010 passage to craft the Republican alternative?

The charitable answer would be: Because vetoes are daunting, big policy changes are difficult, big parties have incompatible factions and presidential leadership is critical. The real answer is that Republicans were bluffing. Like the Democrats, they are a big-government party — just less honest about it.

Most of the attention during the agonies over the House bill focused on the Freedom Caucus. It’s true that conservatives comprised 15 “no” votes on the original American Health Care Act. But 18 “no” votes came from moderates and others who listed a variety of reasons, including concerns about scaling back the Medicaid expansion and funds for dealing with the opioid crisis. In the Senate, several Republicans (Susan Collins, Rob Portman, Dean Heller, Shelley Moore Capito) are balking for some of the same reasons. At the other end of the spectrum you find Mike Lee of Utah and Rand Paul of Kentucky, who oppose the Republican bill because it doesn’t go far enough in repealing Obamacare. And then there are the fakers: senators who flinch from cutting Medicaid funding (well, reducing the rate of increase) because they fear a voter backlash, but who couch their political calculation as principled conservatism.

Look, even the Democrats had a miserable time passing their preferred health bill. In 2009 and 2010, they had a celebrity “light worker” president, a 36-seat majority in the House, and a 60-vote filibuster-proof majority in the Senate (which they lost during the process, but too late to tank the bill). They still had to cajole and bribe members with lures whose nicknames will endure in the history of logrolling — “the cornhusker kickback” for Sen. Ben Nelson and the “Louisiana Purchase” for Sen. Mary Landrieu.

Barack Obama gave 75,227 (or it felt like it) speeches urging passage of the bill. They weren’t honest — we liked our plans but couldn’t keep them — but what they lacked in integrity they made up in length and frequency.

So here we are.

The Republicans have won control of the game (though not with a filibuster-proof majority in the Senate) and they are … constipated. Republicans are not the party of free-market reform anymore (if they ever were).

Opponents of Obamacare were right about one thing: Creating a new entitlement to health care has transformed the U.S. into Great Britain — or close to it. The prime minister’s question time in Parliament is taken up with a remarkable number of the questions like these: “Mrs. Cynthia Reynolds of Quaddle-on-Thyme has been waiting three months for her hip replacement. What does the prime minister propose to do about it?” The notion that the leader of a nation of 65 million subjects, with the second-highest GDP in Europe, should be involved in such specific cases, or that she has the competence to arrange matters satisfactorily for all, is magical thinking. That’s what happens when health care becomes a “right” rather than a product. Rationing is the rule in Europe. Mrs. Reynolds is typical.

America’s political leadership — on both sides — seems less interested in devising an escape from our progressively more European health care mess and more concerned with laying blame for it on the other party.

One lesson of the 2016 primaries was that taking entitlement reform seriously was not as popular with Republican voters as vague promises of repealing Obamacare and adopting a “terrific” replacement that would cover everyone for less money to avoid the dystopia of “people dying in the streets.”

The goal of replacing a top-down, bureaucratically controlled health-delivery system (it’s not insurance) with a more market-oriented system now recedes over the horizon. The House and Senate, in part because they don’t have 60 Senate votes, have not even attempted to propose one. The sitting president celebrated the House bill one month with a Rose Garden ceremony, and then disparaged it as “mean” the next, thus handing the Democrats a sword.

What ought to be a serious debate about reform has become instead an exercise in trimming around the edges. Both the Senate and House bills keep the architecture of Obamacare. The trims are the Medicaid cuts. Maybe that’s good. But let’s be clear: Because of Republican primary voters’ choices, we’re now heading straight for the rationing of care, just like Europe.