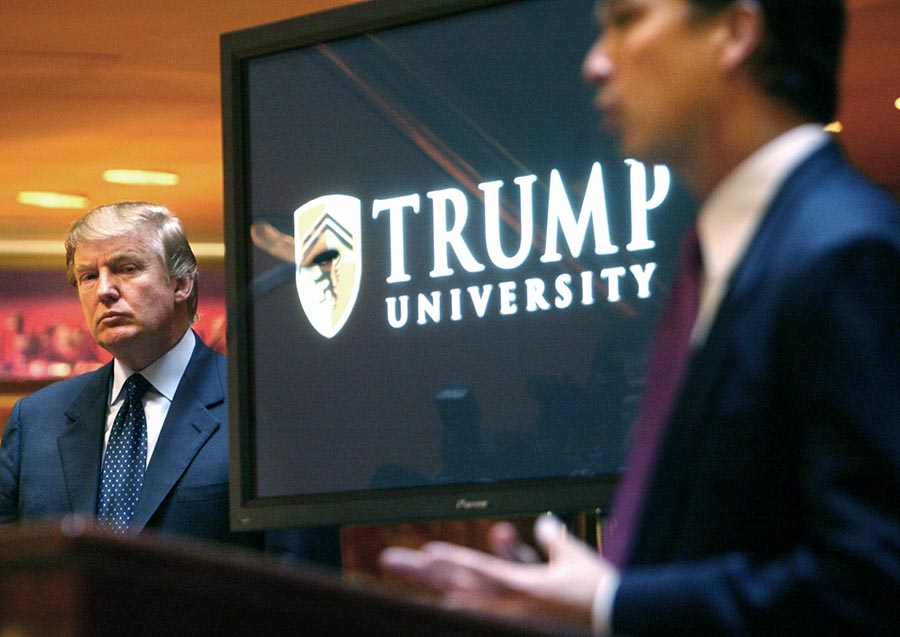 FILE- In this May 23, 2005, file photo, Donald Trump, left, listens as Michael Sexton introduces him at a news conference in New York where he announced the establishment of Trump University. The manual for Trump University events was precise: the room temperature should be 68 degrees. Seats should be arranged in a theater-style curve. And staff should only provide records to an attorney general if compelled by subpoena. Instructing employees how to stall law enforcement investigations might seem like an unusual part of running a seminar company, but at Trump University it was par for the course.

According to sources first cited by the New York Daily News, Trump was planning to pay out approximately $20 million to settle outstanding claims related to the program. The amount was later bumped up to $25 million in a follow-up confirmation made by Reuters.

Despite its name, Trump University was never an accredited school during its five years of operation. Instead, it was a series of real estate seminars where individuals could pay thousands of dollars to supposedly access the secrets of real estate success.

In 2013, a class-action lawsuit was filed against Trump, claiming the operation was a scam that relied on deceptive advertising practices to lure in vulnerable individuals for expensive but largely useless seminars taught by non-experts.

An employee guide submitted as evidence in the lawsuit show that Trump University staff were encouraged to use high-pressure sales tactics on potential customers.

“Money is never a reason for not enrolling in Trump University; if they really believe in you and your product, they will find the money,” the playbook said. “You are not doing any favor [sic] by letting someone use lack of money as an excuse.” At another point, the guide discusses how to get a sale from a person worried about going in debt to pay for a seminar.

The case became a political issue in the 2016 election, with Democratic nominee Hillary Clinton using it to hammer Trump as a dishonest fraudster. Trump, meanwhile, took self-inflicted damage when he argued that Judge Gonzalo Curiel was biased against him in the case due to his Mexican heritage.

Settling the case removes a major distraction from Trump’s ongoing transition to the presidency, and also spares the new president a potentially embarrassing courtroom defeat.

According to Reuters, $4 million of the $25 million settlement will go to the New York attorney general’s office, while the law firms representing former Trump University students will recover costs but not take a portion of the judgment. The settlement amount is just over half of the $40 million that was being sought in the original suit.

The settlement is a major reversal for Trump, who repeatedly vowed to fight the case to the end. In March, he dismissed the whole affair as a “phony lawsuit”that would be an “easy win” for him.