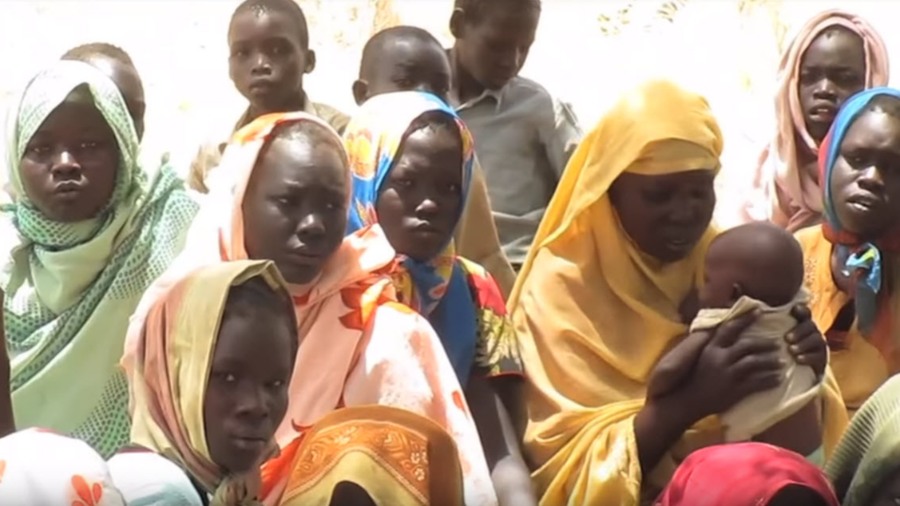 Emancipated slaves sit under a shade tree in southern Sudan.

By Charles Jacobs Published on September 4, 2019 •

Today, an estimated 529,000 to 869,000 black men, women, and children are still slaves. They are bought, owned, sold, and traded by Arab and Muslim masters in five African countries. This statistic estimates those enslaved in Algeria, Libya, Mauritania, and Sudan. It excludes Nigeria, for which there are no tangible estimates.

Western human rights organizations and the mainstream media are practically and painfully silent on this matter. It does not fit with their focus on Western white sin. Here is a brief survey of this quasi-taboo topic.

In Sudan, slavery remains a painful vestige of the Second Sudanese Civil War (1983–2005). That’s when the Arab Muslim government in the north of the country declared a jihad upon the black, largely Christian south. They killed perhaps 2.5 million people and enslaved as many as 200,000.

The war ended in 2005. Black South Sudan became the world’s newest nation on July 9, 2011. Still, many black slaves remain the property of Arab masters across the new border in the north. The exact number is not known. As of 2006, James Aguer Alic, a former Sudanese government minister, estimated that it could be as high as 35,000.

In Mauritania, the very structure of society reinforces slavery. Over the centuries a cruel class system has evolved. The lighter-skinned Arabs (beydanes) and Arabized Berbers rule over the black former slaves. Those slaves have been forcibly Arabized over time (haratin). The free blacks in the south who refuse Arabization and call themselves “Negro-Africans” and the black chattel slave class (abid) are at the bottom. The country is entirely Muslim. Islam theoretically forbids the enslavement of one Muslim by another. However, in this case, Arab racism supersedes adherence to the Shari‘ah (Islamic law).

No slave markets exist in Mauritania. All slaves are born in masters’ households. Pregnancy occurs from the master’s insemination of black slave women, or through mandated “breeding” of slave couples. In the absence of open markets, slaves change hands quietly in individual sales. They’re also traded as substitutes for money in the settling of gambling debts. They can even be rented.

Sub-Saharan Africans fleeing violence and poverty for Europe are enslaved by Algerian and Libyan Arabs as they try to cross the Mediterranean. Today, according to the Global Slavery Index, around 106,000 black Africans are estimated to be enslaved in Algeria.

Migrant women, but also children (both male and female), risk being forced into sexual slavery. Men perform unskilled labor. Those who avoid slavery are also subjected to virulent Arab racism. This was recently confirmed by a recent New York Times report. This further marginalizes the already destitute.

Africans hoping for a better life in Europe also travel to Libya to be trafficked across the Mediterranean, often to Italy. Once there, some are enslaved by local Arabs and traffickers. As of 2016, according to the U.N., there are between 700,000 and 1 million black African migrants in Libya. The Global Slavery Index estimates many as 48,000 of them live as slaves of some nature. Survivors report torture, sex trafficking and slavery. Some are even forced to become prostitutes only after they have reached their destinations.

The slave trade in Libya became international news when CNN obtained video of an actual slave auction in 2017.

In Nigeria, the long-running civil war between the Muslim majority and the 40% Christian minority involves the enslavement of Christian Nigerians. The taking of Christian slaves has become a source of compensation for Islamic fighters.

The recent rise of jihad organizations like ISIS affiliate Boko Haram has been the main source of contemporary slave raids. The most infamous incident of a slave raid was Boko Haram’s abduction of 276 Christian schoolgirls. It happened in the town of Chibok on April 14, 2014. It inspired Michelle Obama’s “#BringBackOurGirls” hashtag. Most slaves are young girls, kidnapped and kept as the concubines of the Islamic soldiers. Some of those prefer to become suicide bombers to escape the life of a sex slave.

Though the U.S. State Department’s 2018 human rights report on Nigeria mentions that the number of slaves captured and owned by Boko Haram terrorists today could be in the thousands, the full number is as of now “unknown.”

Charles Jacobs is President of the American Anti-Slavery Group, whose work can be seen on www.iabolish.org.